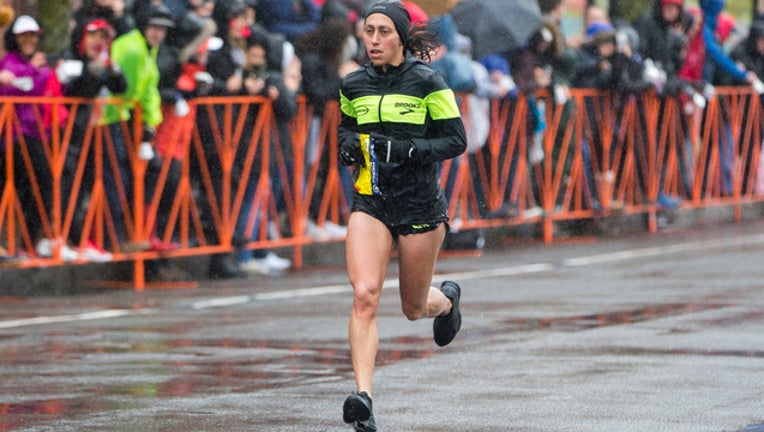 Linden approaches the 24 mile marker of the 2018 Boston Marathon on April 16, 2018 in Brookline, Massachusetts. Linden became the first American woman to win since 1985 with an unofficial time of 2:39:54. (Photo by Scott Eisen/Getty Images)

BOSTON (AP) - Desiree Linden splashed her way through icy rain and a near-gale headwind to a Boston Marathon victory on Monday, the first American woman to win the race since 1985.

The two-time Olympian and 2011 Boston runner-up pulled away at the end of Heartbreak Hill and ran alone through Brookline to finish in an unofficial time of 2 hours, 39 minutes, 54 seconds. That's the slowest time for a women's winner since 1978.

According to the Boston Globe, Linden lives in Washington, Michigan.

A field of 30,000 runners fought drenching rain, temperatures in the mid-30s and gusts of up to 32 mph on the 26.2-mile trek from Hopkinton to Copley Square.

A crowd of fans --thinned and muffled by the weather-- greeted Linden with chants of "U-S-A!"