Nearly a day after Z-Ro's interview with Isiah Carey, memes and rumors were shared across social media, one of them involved a flyer claiming the two Houston-based rappers would be headlining a celebrity boxing match.

HOUSTON - A fight involving legendary Houston rappers, Z-Ro and Trae tha Truth continues to have people around the country talking and rumors flying.

The video shows Z-Ro on the ground in what some have described as a defensive position while another man is seen throwing punches.

Z-Ro claimed in an interview with FOX 26 reporter and host of Isiah Factor Uncensored, Isiah Carey, that he was lured away from a restaurant by Trae tha Truth before he was "sucker-punched" and attacked by several people.

"It's Trae tha Truth. Yeah, he asked me to, after I was finished doing what I was doing with a fan, to come and speak to him," Z-Ro said. "So, I went over there with the intentions of speaking, and speech is not where we're going. That's not what took place, speech. So, it was a lot of, like I said, I was sucker punched and then I was jumped after the sucker punch.

It's the fight video that's making headlines and leaving people around the country talking and it involves two Houston-based legendary rappers, Z-Ro and Trae Tha Truth.

FOX 26 reached out to Trae tha Truth, who declined an on-camera interview but shared his own side of the story on social media.

A day after the interview with Z-Ro aired, memes and rumors were shared across social media about their conversation. One of the rumors involved a flyer circulating on social media claiming the two rappers would be headlining a celebrity boxing match. 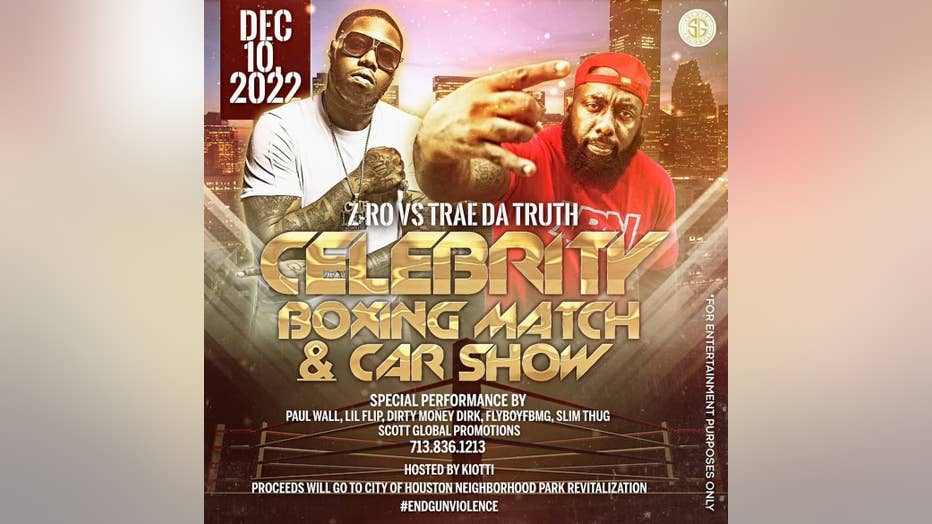 Despite an apparent checkered history the two rappers have, Z-Ro noted the video surfacing had only made things worse between them.

"I did proposition him through other people - like, 'hey, man, if you have a problem, you know, let's do it for the good cause,'" he said. "My momma died of lupus, so I was like, man, 'let's do it for charity; one-on-one private or, let's get a bag for it, you know, do a real celebrity-' I mean, because I mean, that's what was cracking, like celebrity boxing matches, you know what I'm saying? So I'm like, this way, you never got to say nothing about me ever again."

Rapper Z-RO says he was jumped outside of Houston restaurant

Rapper Z-RO is speaking out after a widely circulated video of him getting attacked. He talks exclusively about the incident with Isiah Carey.

"We get in the ring, do what we do and after that, you have to say nothing about me no more. It's just - it's done," Z-Ro concluded. "You know, you donate your piece to whoever, I donate mine to lupus, and other than that, I go back to promote my album Pressure."

See the full interview between Z-Ro and Isiah Carey in the video above.