ORLANDO, Fla. - Tropical Depression Thirteen formed in the Atlantic late Thursday evening and is forecast to become our next hurricane.

The National Hurricane Center (NHC) said the system is located west-southwest of Curacao with maximum sustained winds of 35 mph. The government of Colombia has issued a Tropical Storm Warning for the coast of Colombia from the Colombia/Venezuela border westward to Riohacha.  The system is moving toward the west near 15 mph 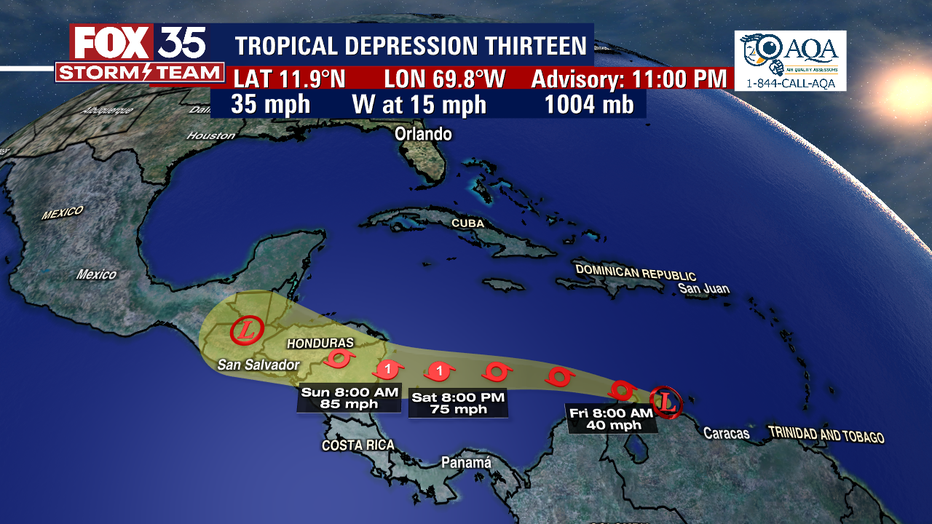 "On the forecast track, the cyclone is expected to move near the ABC Islands, the coast of northwestern Venezuela, and the Guajira Peninsula of Colombia tonight through Friday morning," the NHC said. "The system is then forecast to move across the southwestern Caribbean Sea, moving near San Andres and Providencia Islands Saturday night, and approaching the coast of Nicaragua on Sunday morning."

Hurricane Watch is in effect for:

Tropical Storm Warning is in effect for:

If it does become a named storm, it would be Julia.  However, the system is not expected to have an impact on Florida at this time.

Meanwhile, the remnants of Tropical Depression Twelve were located about 1,400 miles west-northwest of the Cabo Verde Islands. Continued weakening is forecast.

So far, the 2022 Atlantic hurricane center has produced nine named storms: Alex, Bonnie, Colin, Danielle, Earl, Fiona, Gaston, Hermine, and Ian. The next two names on the list are Julia and Karl. October ranks as the third-most-active month (behind September and August) for tropical activity in the Atlantic Basin, typically producing about two named storms, one of which becomes a hurricane. And every other October, on average, one of those hurricanes intensifies into a "major hurricane," achieving Category 3 or higher intensity on the Saffir-Simpson Hurricane Wind Scale.