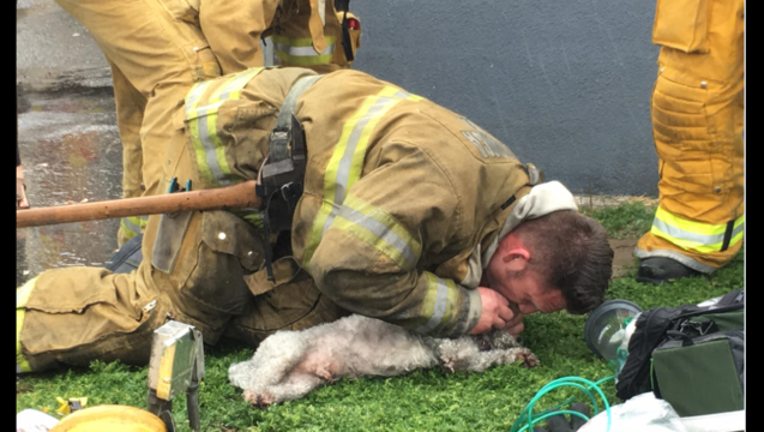 SANTA MONICA, Calif. (FOX 11 /AP) - Santa Monica firefighters who spent 20 minutes performing mouth-to-snout resuscitation on a dog they rescued from a burning apartment are being hailed as heroes.

The dog's owner, 35-year-old Crystal Lamirande, had just returned to her Santa Monica apartment Tuesday when a neighbor yelled there was a fire.

Lamirande says she frantically tried to save her dog, a 10-year-old Bichon Frise/Shih Tzu named Nalu. But she says the smoke was too thick.

Moments later as firefighters arrived, she told them about Nalu. They quickly got the fire under control and pulled the lifeless dog from a bedroom.

Firefighter Andrew Klein spent 20 minutes bringing the dog back to life as her tearful owner watched.

Photographer Billy Fernando captured the rescue in photos that were shared by the Santa Monica Fire Department.

Lamirande says the pooch spent the next 24 hours in an oxygen chamber and is doing well.