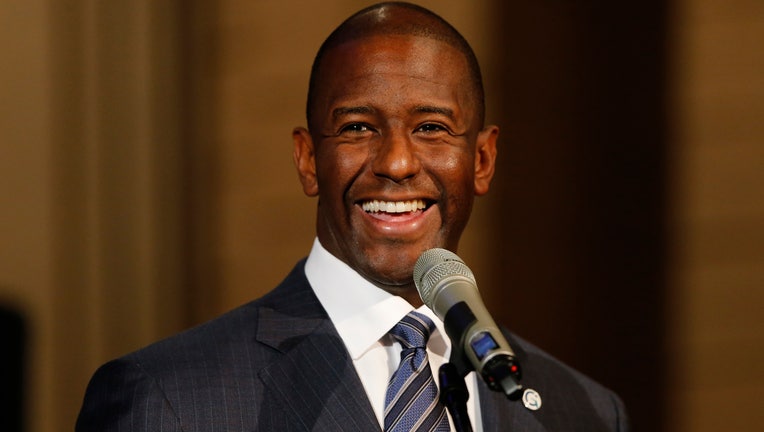 TALLAHASSEE, Fla. - Democrat Andrew Gillum, the former Tallahassee mayor who nearly defeated Gov. Ron DeSantis in a run for Florida governor in 2018, has been indicted on wire fraud charges, according to the Department of Justice.

A federal grand jury returned a 21-count indictment against Gillum, 42, and Sharon Janet Lettman-Hicks, 53. Both face 19 counts of wire fraud. Gillum also faces a charge of making false statements to agents of the Federal Bureau of Investigation.

Between 2016 and 2019, the indictment alleged that the pair conspired to commit wire fraud "by unlawfully soliciting and obtaining funds from various entities and individuals through false and fraudulent promises and representations that the funds would be used for a legitimate purpose." Lettman-Hicks then used her company to fraudulently give money to Gillum disguised as payroll payments, the office said in a press release.

Prosecutors said the pair "conspired to commit wire fraud, by unlawfully soliciting and obtaining funds from various entities and individuals through false and fraudulent promises and representations that the funds would be used for a legitimate purpose."

Gillum, in a statement released through his lawyers, denied the charges.

"Make no mistake that this case is not legal, it is political. Throughout my career I have always stood up for the people of Florida and have spoken truth to power," the statement said. "There’s been a target on my back ever since I was the mayor of Tallahassee. They found nothing then, and I have full confidence that my legal team will prove my innocence now."

He made his first appearance in federal court Wednesday afternoon, entering the courtroom shackled at the ankles and wrists. He and Lettman-Hicks pleaded not guilty to all charges. A trial date was set for Aug. 16. Both were released without bail with instructions not to leave the Northern District of Florida without permission.

It’s the latest trouble for Gillum.  In March 2020, Gillum was found intoxicated and unconscious in a hotel room with two men, including one who works as a male escort. Two days later he entered a rehabilitation center, and later did a television interview and said he’s bisexual.