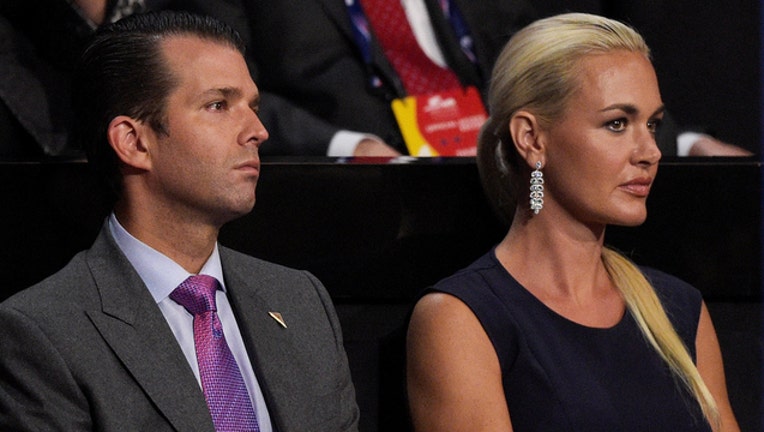 Donald Trump Jr. along with his wife Vanessa Trump, attend the evening session on the fourth day of the Republican National Convention on July 21, 2016 at the Quicken Loans Arena in Cleveland, Ohio. (Photo by Jeff Swensen/Getty Images)

NEW YORK - (AP) — Donald Trump Jr.'s wife took legal steps on Thursday to formally end their 12-year marriage, and the couple issued a statement saying they're going their separate ways but "will always have tremendous respect for each other and our families."

Vanessa Trump, a former model, listed the breakup as "uncontested" in a state Supreme Court divorce complaint filing that is secret except for the title of the case.

The Trumps, each 40 years old, were married in 2005 and have five children. Their first child, a girl born in 2007, made a grandfather of Donald Trump a decade before he became president.

In a statement issued through The Trump Organization, where Donald Trump Jr. is an executive, the couple said in part: "After 12 years of marriage, we have decided to go our separate ways. ... We have five beautiful children together and they remain our top priority."

The divorce filing comes as Trump Jr. has emerged as a central figure in at least one focus point of the special counsel's investigation into Trump ties to Russia: a June 2016 meeting in Trump Tower involving a Russian lawyer and top campaign aides that, according to Trump Jr.'s emails, he accepted after being promised dirt on Hillary Clinton, Trump's Democratic rival.

Trump Jr. was an enthusiastic mainstay on the campaign trail during his father's 2016 march to the Republican presidential nomination and then the presidency and now co-runs the family business with his brother Eric Trump, overseeing a global empire that includes hotels, golf courses and a winery.

He is a popular GOP fundraising draw and has expressed political ambitions of his own, though he has drawn criticism for peddling online right-wing and alt-right memes.

Vanessa Trump's engagement and marriage to Trump Jr. had been a subject of tabloid fascination in New York long before her father-in-law, who has been divorced twice and married three times, entered politics.

At the time of their engagement, there were unflattering stories about how Trump Jr. had accepted a free diamond ring from a jewelry merchant in New Jersey in exchange for staging a recreation of his wedding proposal outside the store for reporters and TV cameras.

But soon, Trump Jr.'s name was more often associated publicly with his appearances alongside his father on "The Apprentice" or as a judge at beauty pageants.

A profile on the couple by The New York Times in 2006 reflected the lightheartedness and pressures of the pair's early days and led Trump Jr. to reflect on the spotlight that fell on his father anytime the family business soured or he confronted divorce.

"Sometimes being a Trump, everyone kind of wants to see you fail," Trump Jr. told the newspaper.

The article said Vanessa Haydon Trump grew up in a town house on Manhattan's Upper East Side, and it recalled her amusement at their initial 2003 meeting when Donald Trump introduced himself and his son to her, only to return later and say: "I don't think you've met my son Donald Trump Jr." The Times quoted Vanessa Trump as responding: "Yeah, we just met, five minutes ago."

When the young couple met again at a party six weeks later, they didn't remember the earlier meeting until they talked for an hour and Vanessa Trump suddenly recalled that encounter, the newspaper said.

Last month, Vanessa Trump opened a letter to her husband containing an unidentified white powder and was briefly hospitalized as a precaution, but the substance turned out to be nonhazardous. A Massachusetts man later was charged with sending the threatening letter.