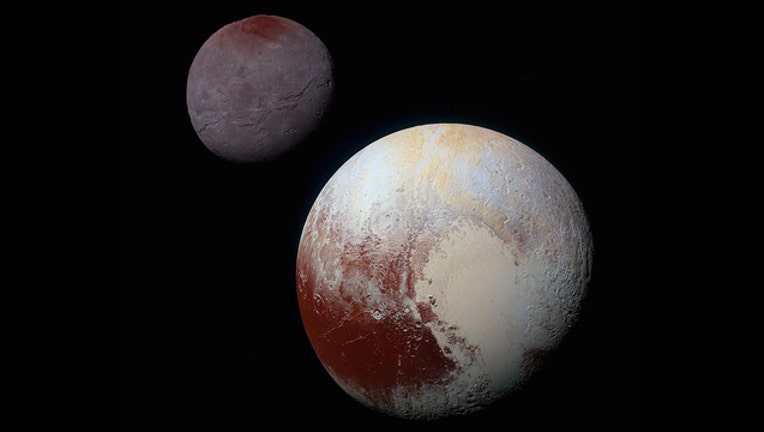 The New Horizons spacecraft helped us see Pluto and its largest moon Charon more clearly than we could see them with telescopes. Credits: NASA

(FOX 13) - Scientists celebrated the anniversary of the discovery of Pluto Saturday, February 18.

The celestial body most modern adults learned was the ninth planet was discovered by U.S. astronomer Clyde Tombaugh in 1930, and was named by an 11-year-old girl from England – Venetia Burney – later that year.

Today, Pluto is considered a dwarf planet, orbiting the sun like other planets, but much smaller. According to NASA, the dwarf planet is half as wide as the United States and smaller than Earth’s moon.

“If you lived on Pluto, you would have to wait 248 Earth years to celebrate your first birthday. One day on Pluto is about six and a half days on Earth,” NASA’s website titled “What is Pluto?” says.

Pluto has five moons, the largest of which is half Pluto’s size.

Pluto is in an area of space called the Kuiper Belt, which is inhabited by thousands of small, icy objects similar to Pluto, but smaller.

NASA says it learns about Pluto using telescopes like the powerful Hubble Space Telescope. Even with its ability to capture images from far away, Pluto is so far, Hubble images of the dwarf planet are fuzzy.

Pluto is made up mostly of rock, but about one third of its mass is ice and the temperature is 375 to 400 degrees below zero Fahrenheit. The dwarf planet is more than 3.7 billion miles from the sun, and its orbit is a tilted oval, unlike most planets which orbit the sun in a flat, circular fashion.