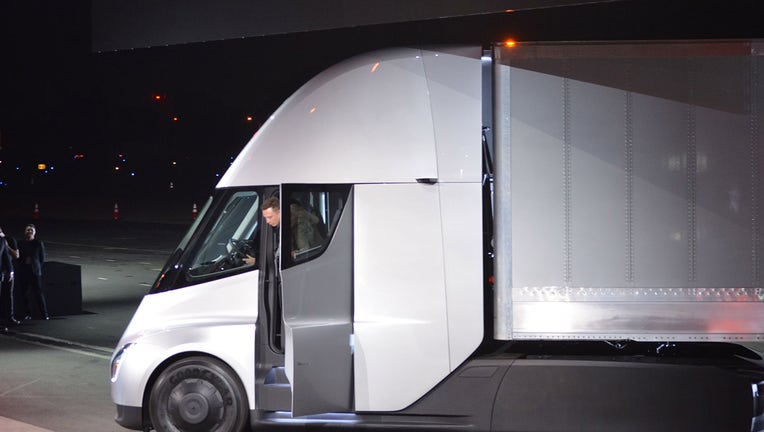 File: Tesla Chairman and CEO Elon Musk steps out of the new "Semi" electric Truck during the unveiling for buyers and journalists on November 16, 2017 in Hawthorne, California, near Los Angeles. (VERONIQUE DUPONT/AFP via Getty Images)

Tesla founder Elon Musk announced PepsiCo will be the first recipient of his company's electric semi-trucks, which are set to finally start production after lengthy delays.

Musk said in a tweet on Thursday that the battery-powered Class 8 truck, which sport a 500-mile range and are "super fun to drive," will arrive on Dec. 1.

The trucks are expected to reduce fuel costs and overall fleet emissions for the company.

The announcement comes at a busy week for Musk, who is also the CEO of SpaceX and is in the process of acquiring Twitter.

As Reuters reported, Tesla initially set out to start production on the electric semis in 2019, but they were repeatedly pushed back due to part shortages.

Musk did not say how many trucks would be delivered, though PepsiCo previously reserved 100 of them.

LINK: GET UPDATES ON THIS STORY FROM FOXBUSINESS.COM