The bridge is a key supply artery for Moscow’s faltering war effort in southern Ukraine.

An explosion caused the partial collapse of a bridge linking the Crimean Peninsula with Russia on Saturday, damaging a key supply artery for the Kremlin's faltering war effort in southern Ukraine. Three people were killed in the blast, Russian authorities said.

The speaker of Crimea’s Kremlin-backed regional parliament immediately accused Ukraine, though Moscow didn't apportion blame. Ukrainian officials have repeatedly threatened to strike the bridge and some lauded the attack, but Kyiv stopped short of claiming responsibility.

The bombing came a day after Russian President Vladimir Putin turned 70, dealing him a humiliating blow that could lead him to up the ante in his war on Ukraine.

Russia's National Anti-Terrorism Committee said that a truck bomb caused seven railway cars carrying fuel to catch fire, resulting in a "partial collapse of two sections of the bridge." A man and a woman who were riding in a vehicle across the bridge were killed by the explosion and their bodies were recovered, Russia’s Investigative Committee said. It didn’t provide details on the third victim. 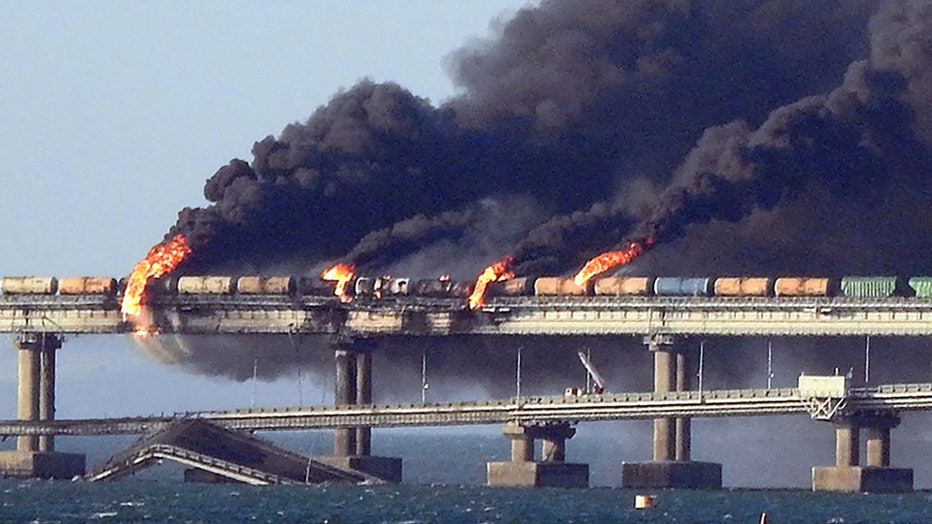 Black smoke billows from a fire on the Kerch bridge that links Crimea to Russia, after a truck exploded, near Kerch, on October 8, 2022. (Photo by -/AFP via Getty Images)

The 19-kilometer (12-mile) bridge across the Kerch Strait linking the Black Sea and the Sea of Azov opened in 2018 and is the longest in Europe. The $3.6 billion project is a tangible symbol of Moscow’s claims on Crimea and has provided an essential link to the Crimean Peninsula, which Russia annexed from Ukraine in 2014.

The peninsula holds symbolic value for Russia and is key to sustaining its military operations in the south of Ukraine. If the bridge were made inoperable, it would make it significantly more challenging to ferry supplies to Crimea. While Russia seized the areas north of Crimea early on during the invasion and built a land corridor to it along the Sea of Azov, Ukraine is pressing a counteroffensive to reclaim them.

The bridge has train and automobile sections. Russia’s National Anti-Terrorism Committee specified that the explosion and fire led to the collapse of the two sections of one of the two links of the automobile bridge, while another link was intact.

Russia’s Energy Ministry said Crimea has enough fuel for 15 days, adding that it was working on ways to replenish stock.

Authorities suspended passenger train traffic across the bridge until further notice. Putin was informed about the explosion and he ordered the creation of a government panel to deal with the emergency.

The speaker of Crimea’s Kremlin-backed regional parliament blamed Ukraine for the explosion, but downplayed the severity of the damage and said the bridge would be promptly repaired.

"Now they have something to be proud of: over 23 years of their management, they didn’t manage to build anything worthy of attention in Crimea, but they’ve managed to damage the surface of the Russian bridge," Vladimir Konstantinov, chairman of the State Council of the Republic, wrote on Telegram. 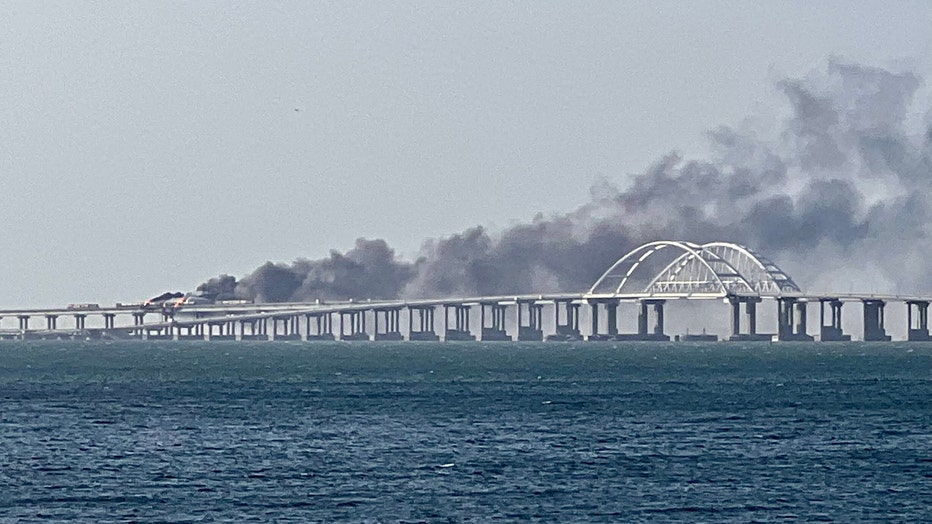 This photograph shows thick black smoke rising from a fire on the Kerch bridge that links Crimea to Russia, after a truck exploded, near Kerch, on October 8, 2022. (Photo by ROMAN DMITRIYEV/AFP via Getty Images)

The parliamentary leader of Ukrainian President Volodymyr Zelenskyy’s party on Saturday stopped short of claiming that Kyiv was responsible but appeared to cast it as a consequence of Moscow’s takeover of Crimea and attempts to integrate the peninsula with the Russian mainland.

"Russian illegal construction is starting to fall apart and catch fire. The reason is simple: if you build something explosive, then sooner or later it will explode," David Arakhamia, the leader of the Servant of the People party, wrote on Telegram.

"And this is just the beginning. Of all things, reliable construction is not something Russia is particularly famous for," he said.

RELATED: Kyiv’s city council to give out potassium iodine pills in case of Russian nuclear attack

Other Ukrainian officials were more celebratory while still stopping short of claiming responsibility.

The Ukrainian postal service announced that it would issue stamps commemorating the blast, saying in a statement that the images would draw on classic film posters to highlight the bridge's "sacred significance" to Moscow. The postal service previously released a set of stamps commemorating the sinking of the Moskva, a Russian flagship cruiser, by an Ukrainian strike in late May.

The secretary of Ukraine's National Security and Defense Council, Oleksiy Danilov, posted a video on Twitter with the Kerch Bridge on fire on the left side and video with Marilyn Monroe singing her famous "Happy Birthday Mr. President" on the right.

An advisor to Zelenskyy, Mykhailo Podolyak, tweeted: "Crimea, the bridge, the beginning. Everything illegal must be destroyed, everything stolen must be returned to Ukraine, everything occupied by Russia must be expelled:"

In Moscow, Russian Foreign Ministry spokeswoman Maria Zakharova said that "the reaction of the Kyiv regime to the destruction of civilian infrastructure shows its terrorist nature."

In August, Russia suffered a series of explosions at an airbase and munitions depot in Crimea, which underlined its vulnerability.

Local authorities in Crimea made conflicting statements about what the damaged bridge would mean for residents and their ability to buy consumer goods on the peninsula, a popular sun-and-sea destination for Russian tourists year-round that is home to Sevastopol, a key city and a naval base.

Reflecting the tensions, Mikhail Razvozhayev, the head of Sevastopol, initially announced a ban on sales of car fuel in canisters and said that the sales of groceries will be limited to 3 kilograms per person to avoid a panicky run on supplies, but then changed course just an hour later, saying that there will be no restrictions.

At the same time, he sought to assuage residents, insisting they weren't cut off from the mainland.

"There are land corridors via the new territories, and the ferry crossing near the Crimean Bridge has started operating," he said.

People relax on a beach of the Black Sea in Sevastopol, the largest city on the Crimean Peninsula and its most important port and naval base, with non-operating Soviet military equipment seen in the background on July 16, 2022. -(Photo by OLGA MALTSE

The Association of Russia’s tourist agencies estimated that about 50,000 tourists were in Crimea on vacation at the time of the blast. The head of Russia’s top tourism body, Ilya Umansky, told the Interfax agency that ferry links had been relaunched Saturday between the peninsula and the mainland but admitted that those seeking to enter Crimea in the coming days were set to experience "some discomfort."

The blast on the bridge occurred hours after explosions rocked the eastern Ukrainian city of Kharkiv early Saturday, sending towering plumes of smoke into the sky and triggering a series of secondary explosions.

Ukrainian officials accused Russia of pounding Kharkiv, Ukraine’s second-largest city, with surface-to-air missiles and said at least one person was wounded. The strikes targeted the largely residential neighborhoods of Saltivka and Osnovianskiy, the regional governor, Oleh Sinehubov, said on Telegram.

Sinehubov said Russia had deployed S-300s missiles in the strike. If true, this would mark the latest in a series of instances when Moscow was reported to have repurposed a weapon originally designed for air defense to strike ground targets, possibly because of a shortage of more suitable munitions.

Ukrainian authorities in the northern Sumy region, west of Kharkiv and a frequent target of Russian shelling and missile attacks, also reported on Saturday that five towns and villages had been hit overnight. Dmytro Zhyvytskyi, the regional governor, said on Telegram that a 51-year-old civilian man had been killed.

Russian rockets also slammed into three towns facing the Zaporizhzhia nuclear power plant, Europe’s largest. The regional governor, Valentyn Reznichenko, said that nobody was injured in the strikes on the towns of Marganets, Chervonohryhorivka, and Myrove. 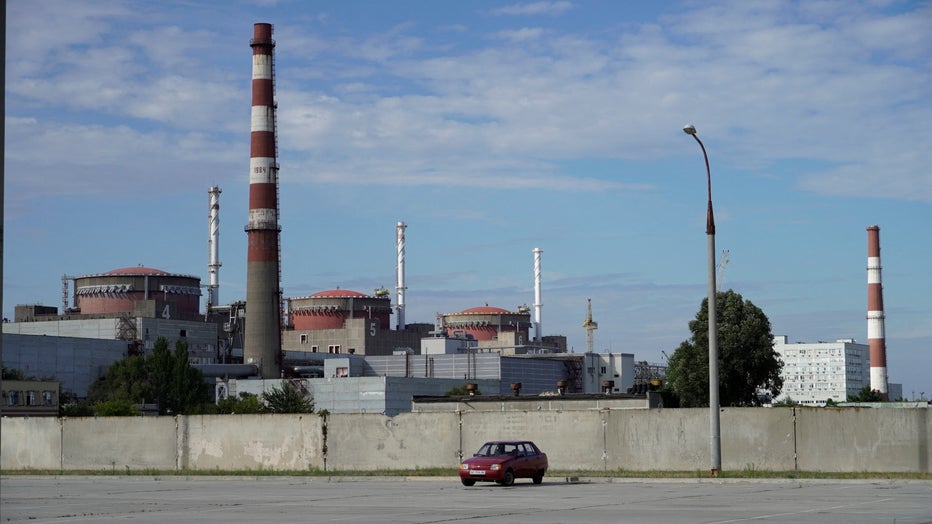 This photo taken on September 11, 2022 shows a general view of the Zaporizhzhia Nuclear Power Plant in Enerhodar (Energodar), Zaporizhzhia Oblast, amid the ongoing Russian military action in Ukraine. (Photo by STRINGER/AFP via Getty Images)

The State Emergency Service of Ukraine wrote on Telegram that 21 people had been rescued from the rubble of a four-story apartment block, and that search and rescue work was continuing.

Russian missiles damaged more than 40 apartment buildings on Thursday in the Ukrainian-controlled city, which is nevertheless the official capital of a region Moscow moved to illegally annex last week. Zaporizhzhia lies across a wide reservoir on the Dnieper river from the nuclear plant with the same name, one of the world’s largest.

The deadly strikes came hours after Ukraine’s president announced that his military had retaken three more villages in another of the four regions claimed by Russia, Moscow’s latest battlefield reversal.