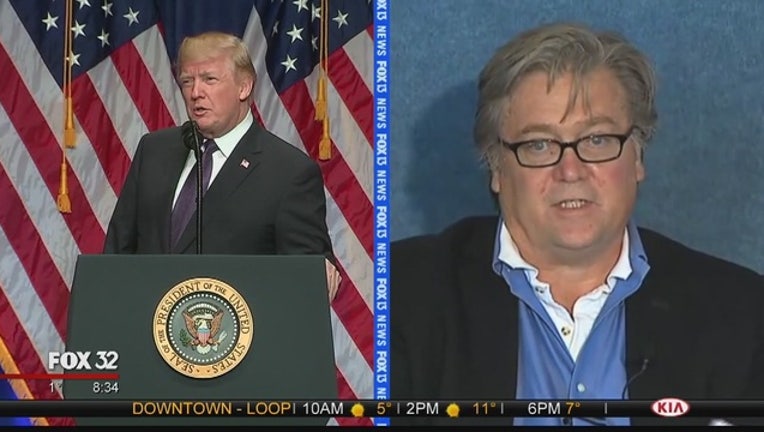 WASHINGTON (AP) - A data analysis firm employed by President Donald Trump's 2016 campaign tapped the Facebook profiles of more than 50 million users without their permission, allowing it to capitalize on the private social media activity of a large portion of the U.S. electorate, newspapers reported Saturday.

One of the largest data leaks in Facebook history allowed Cambridge Analytica, which had ties to Trump campaign strategist Steve Bannon, to develop techniques that formed the basis of its work on the Trump campaign, The New York Times and The Guardian reported.

Facebook said it suspended Cambridge Analytica over allegations that it kept the improperly obtained user data after telling Facebook it had been deleted.

In a blog post, Facebook explained that Cambridge Analytica had years ago received user data from a Facebook app that purported to be a psychological research tool, though the firm was not authorized to have the information. Roughly 270,000 people downloaded and shared personal details with the app.

Cambridge Analytica later certified in 2015 that it had destroyed the information it had received, according to Facebook, although the social network said it received reports "several days ago" that not all the data was deleted. Facebook says it is investigating.

Facebook has also suspended the access of Cambridge Analytica's parent company, Strategic Communication Laboratories; University of Cambridge psychology professor Aleksandr Kogan, the academic who created the app in question; and another individual, Christopher Wylie of Eunoia Technologies, who also allegedly received user data from the app. Wylie is a former Cambridge Analytics employee who has emerged as a primary source for the Times report.

Cambridge Analytica denied wrongdoing in a statement. It said the parent company's SCL Elections unit hired Kogan to undertake "a large scale research project in the U.S.," but subsequently deleted all data it received from Kogan's company after learning that Kogan had obtained data in violation of Facebook policies. The firm said none of Kogan's data was used in its 2016 election work for the "avoidance of doubt."

The Facebook blog post, written by deputy general counsel Paul Grewal, cited the "public prominence" of Cambridge Analytica, called the alleged data retention an "unacceptable violation of trust" and said the social network will take legal action if necessary to hold all parties "responsible and accountable for any unlawful behavior."

Cambridge Analytica is probably best known for its political work during the 2016 U.S. presidential campaign. The company claims to build psychological profiles based on personal details from millions of Americans that can categorize individual voters. It worked for both the primary campaign of Texas Republican Sen. Ted Cruz, and Trump's general-election campaign.

Trump's campaign Saturday denied using the firm's data, saying it relied on the Republican National Committee for its data.

"The campaign used the RNC for its voter data and not Cambridge Analytica," the campaign said in a statement. "Using the RNC data was one of the best choices the campaign made. Any claims that voter data were used from another source to support the victory in 2016 are false."

The firm had secured a $15 million investment from Mercer and wooed Bannon with the promise of tools that could identify the personalities of American voters and influence their behavior. But Cambridge Analytica did not have the data to make its new products work. So the firm harvested private information from the Facebook profiles of more than 50 million users without their permission.

A representative for Bannon did not immediately respond to an email seeking comment.

The company has surfaced in the U.S. probes into Russian interference in the 2016 presidential election. British officials are also investigating the firm in connection with the June 2016 EU referendum.

Cambridge Analytica CEO Alexander Nix also disclosed last November that the company reached out to WikiLeaks founder Julian Assange during the campaign to request emails related to the campaign of Democrat Hillary Clinton. Nix said Assange denied the request, which came after Assange had said publicly that he had the emails. Clinton campaign emails stolen by Russian agents are one focus of the election-interference probes.

Nix has denied any involvement in Russian election meddling.

Revelations that Cambridge Analytica misused social media data could also be of interest to Mueller's investigation. While much of the thrust of special counsel's investigation has been tightly held, Mueller has requested that the firm turn over the emails of any employees who worked on the campaign, according to a report in The Wall Street Journal last year.

Mueller is also looking at the role Wikileaks played in acquiring and making public the stolen Clinton campaign emails.