Families of victims and survivors of the mass shootings in Buffalo, New York and Uvalde, Texas appeared before a U.S. House committee Wednesday.

WASHINGTON - An 11-year-old girl who survived the mass shooting at an elementary school in Uvalde, Texas, recounted in video testimony to Congress on Wednesday how she covered herself with a dead classmate’s blood to avoid being shot and "just stayed quiet."

Miah Cerrillo, a fourth-grader at Robb Elementary School, told lawmakers in a pre-recorded video that she watched a teacher get shot in the head before looking for a place to hide.

Miah Cerrillo, a fourth-grader at Robb Elementary School, spoke before Congress in a pre-recorded video about surviving the mass shooting in Uvalde, Texas.

Nineteen children and two teachers died when an 18-year-old gunman opened fire with an AR-15-style rifle inside Robb Elementary School on May 24.

It’s the second day lawmakers have heard wrenching testimony on the nation’s epidemic of gun violence. On Tuesday, a Senate panel heard from the son of an 86-year-old woman killed when a gunman opened fire in a racist attack on Black shoppers in Buffalo, New York on May 14. Ten Black people died.

In the video Wednesday, Miah’s father, Miguel Cerillo, asks his daughter if she feels safe at school anymore. She shook her head no.

Matthew McConaughey called for "gun responsibility" in a recent op-ed following the mass shooting that took place in his hometown of Uvalde, Texas. The 52-year-old actor explained the difference between his idea of "gun responsibility" and "gun control" during a press briefing at the White House.

The testimony at the House Oversight Committee comes as lawmakers are working to strike a bipartisan agreement on gun safety measures in the aftermath of back-to-back mass shootings.

Rep. Carolyn Maloney, D-N.Y., the panel’s chairwoman, called the hearing to focus on the human impact of gun violence and the urgency for gun control legislation.

"I am asking every Member of this Committee to listen with an open heart to the brave witnesses who have come forward to tell their stories about how gun violence has impacted their lives," Maloney said in opening remarks. "Our witnesses today have endured pain and loss. Yet they are displaying incredible courage by coming here to ask us to do our jobs."

But even as some lawmakers shed tears alongside the panelists, the hearing displayed the contentious debate over gun control Congress has faced over and over again surrounding mass shootings. Several Republicans on the panel turned the conversation to the individuals who abuse guns and how "hardening schools" could help protect them. 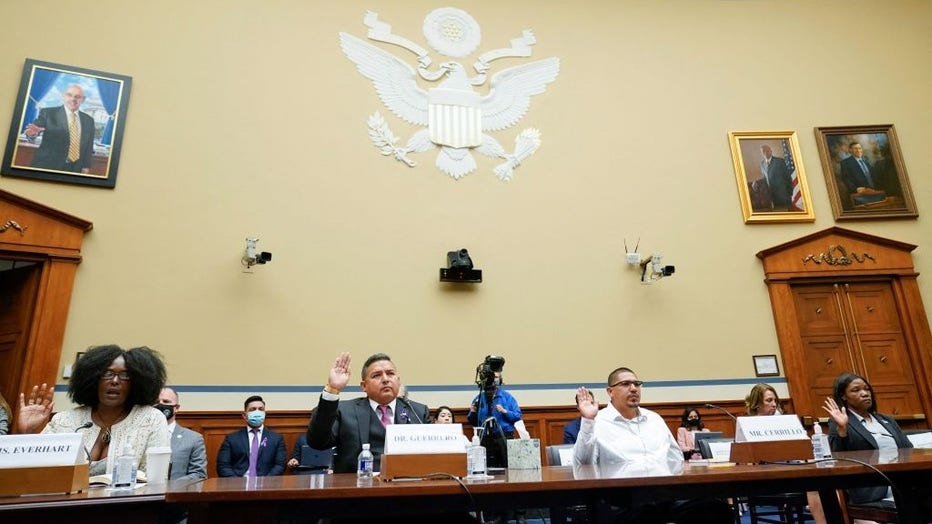 Rep. Andrew Clyde, R-Ga., who owns a gun store, said that one of the things he learned in his military service was that "the harder the target you are, the less likely you will be engaged by the enemy." He called on schools to keep doors locked, provide a single point of entry and "a volunteer force of well-trained and armed staff, in addition to a school resource officer."

The parents of the victims and survivors implored lawmakers not to let their children’s death and pain be in vain. After Miah spoke, her father told lawmakers that he testified because "I could have lost my baby girl."

"But she is not the same little girl that I use to play with," Cerrillo said. "Schools are not safe anymore. Something needs to really change."

Also testifying was Zeneta Everhart, whose 20-year-old son Zaire was wounded in the Buffalo mass shooting.

Everhart told lawmakers it was their duty to draft legislation that protects Zaire and other Americans. She said that if they did not find the testimony moving enough to act on gun laws, they had an invitation to go to her home to help her clean her son’s wounds.

President Joe Biden is urging action on national gun reform. Raising the age to purchase a gun from 18 to 21, is on the table.

"My son Zaire has a hole in the right side of his neck, two on his back, and another on his left leg," she said, then paused to compose herself. "As I clean his wounds, I can feel pieces of that bullet in his back. Shrapnel will be left inside of his body for the rest of his life. Now I want you to picture that exact scenario for one of your children."

The parents of Lexi Rubio, who died in her classroom in Uvalde, also testified. Felix and Kimberly Rubio recounted finding out about their daughter’s death hours after leaving Lexi’s school awards ceremony on the morning of the shooting.

To get to the elementary school, Kimberly Rubio said she ran barefoot for a mile with her sandals in her hand and with her husband by her side. A firefighter eventually gave them a ride back to the civic center.

"Soon after we received the news that our daughter was among the 19 students and two teachers that died as a result of gun violence," she said, fighting through tears.

The hearing comes as the Democratic-led House is expected to pass legislation that would raise the age limit for purchasing a semi-automatic rifle and prohibit the sale of ammunition magazines with a capacity of more than 10 rounds.

The legislation has almost no chance of becoming law as the Senate pursues negotiations focused on improving mental health programs, bolstering school security and enhancing background checks. But it does allow Democratic lawmakers a chance to frame for voters in November where they stand on policies that polls show appeal to a majority of voters.

Majorities of U.S. adults think mass shootings would occur less often if guns were harder to get, and that schools and other public places have become less safe than they were two decades ago.