Cleanup begins after Fiona sweeps homes into the ocean in Canada

After surging north from the Caribbean as a hurricane, Fiona battered Nova Scotia, Prince Edward Island, Newfoundland and Quebec.

Canadian troops are being sent to assist the recovery from the devastation of storm Fiona, which swept away houses, stripped off roofs and knocked out power across the country's Atlantic provinces.

After surging north from the Caribbean as a hurricane, Fiona came ashore before dawn Saturday as a post-tropical cyclone, battering Nova Scotia, Prince Edward Island, Newfoundland and Quebec with hurricane-strength winds, heavy rains and huge waves.

Defense Minister Anita Anand said Saturday that troops would help remove fallen trees and other debris, restore transportation links and do whatever else is required for as long as it takes. She didn’t specify how many troops would be deployed.

Fiona was blamed for at least five deaths in the Caribbean, but there was no confirmation of any fatalities or serious injuries in Canada. Police said a woman who might have been swept away was listed as missing in the town of Channel-Port Aux Basques on the southern coast of Newfoundland.

"I’m seeing homes in the ocean. I’m seeing rubble floating all over the place. It’s complete and utter destruction. There’s an apartment that is gone," René J. Roy, chief editor at Wreckhouse Press and a resident of the twon, said in a phone interview.

Roy estimated between eight to 12 houses and buildings had washed into the sea. "It’s quite terrifying," he said.

The Royal Canadian Mounted Police said the town of 4,000 people was in a state of emergency with multiple electrical fires and residential flooding.

As the extent of damage became clear, Prime Minister Justin Trudeau canceled his trip to Japan for the funeral for assassinated former Prime Minister Shinzo Abe.

"There are people who see their houses destroyed, people who are very worried — we will be there for you," Trudeau added.

Mike Savage, mayor of Halifax, said the roof of an apartment building collapsed in Nova Scotia's biggest city and officials had moved 100 people to an evacuation center. He said no one was seriously hurt. 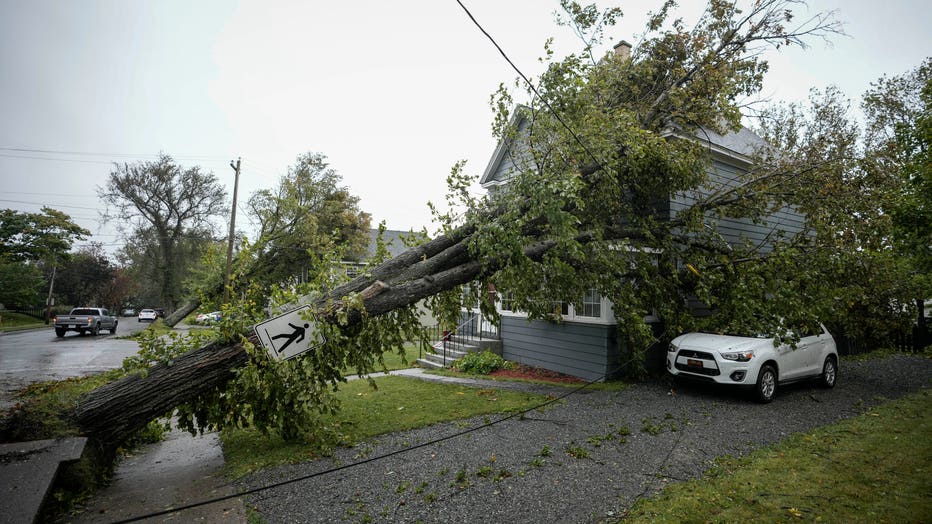 A tree sits against power lines and a home after Post-Tropical Storm Fiona hit on September 24, 2022 in Sydney, Nova Scotia on Cape Breton Island in Canada. (Photo by Drew Angerer/Getty Images)

More than 415,000 Nova Scotia Power customers — about 80% of the province of almost 1 million people — were affected by outages Saturday. Over 82,000 customers in the province of Prince Edward Island, about 95%, also lost power, while NB Power in New Brunswick reported 44,329 were without electricity.

Peter Gregg, president and CEO of Nova Scotia Power, said unprecedented peak winds inflicted severe damage and the bad weather kept repair crews from going out at first. He said about 380,000 customers remained without power Saturday afternoon as a weakening Fiona moved away over the Gulf of St. Lawrence.

The Canadian Hurricane Centre tweeted that Fiona had the lowest pressure ever recorded for a storm making landfall in Canada. Forecasters had warned it could be the one of the most powerful storms to hit the country.

He said more resilient infrastructure is needed to withstand extreme weather events, saying that what was once a one-in-100 year storm might now arrive every few years because of climate change.

"Things are only getting worse," Trudeau said.

A state of local emergency was declared in the Cape Breton Regional Municipality.

"There are homes that have been significantly damaged due to downed trees, big old trees falling down and causing significant damage," Mayor Amanda McDougall told The Associated Press. "We’re also seeing houses that their roofs have completely torn off, windows breaking in. There is a huge amount of debris in the roadways."

Nova Scotia Premier Tim Houston said roads were washed out, including his own, and said an "incredible" amount of trees had been blown over.

Fiona is the lowest-pressured land-falling storm on record in Canada. Credit: Fiona Kirkpatrick Parsons via Storyful

"It is pretty devastating," Houston said.

Prince Edward Island Premier Dennis King said few communities were spared damage, with the devastation looking to be beyond anything they had seen previously in the province.

Federal Minister of Emergency Preparedness Bill Blair said there was very extensive damage at the airport in Sydney, Nova Scotia. He said other airports also were hit, but that damage at the Halifax facility, Nova Scotia’s largest airport, was minor.

In Sydney, Nova Scotia, the largest city on Cape Breton, about 20 people took refuge at the Centre 200 sports and entertainment facility, said Christina Lamey, a spokeswoman for the region. Lamey said hundreds of people had been displaced in the province.

Arlene and Robert Grafilo fled to Centre 200 with their children, ages 3 and 10, after a big tree toppled on their duplex apartment.

"We were trapped and we couldn’t open the doors and the windows, so that’s when we decided to call 911," Arlene Grafilo said. She said firefighters eventually rescued them. 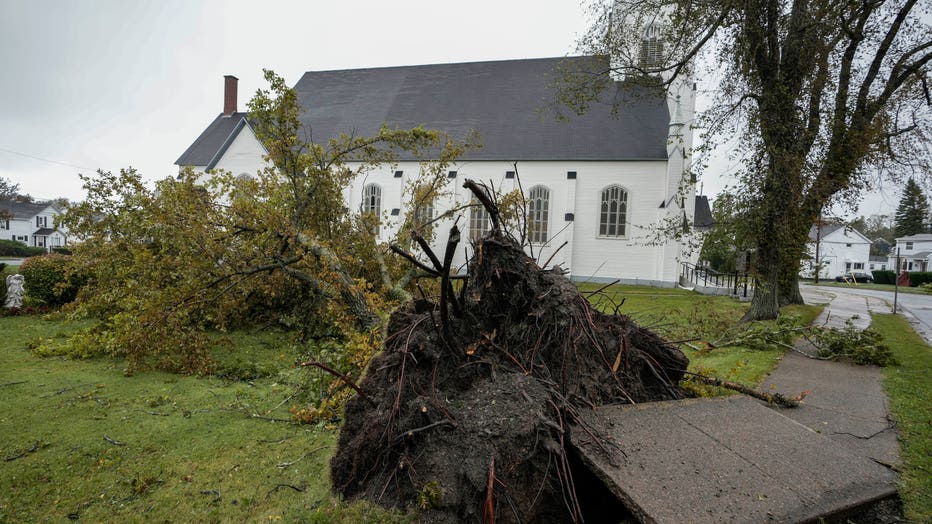 A tree is uprooted along a sidewalk from winds from Post-Tropical Storm Fiona on September 24, 2022 in Sydney, Nova Scotia on Cape Breton Island in Canada. (Photo by Drew Angerer/Getty Images)

Peter MacKay, a former foreign minister and defense minister who lives in Nova Scotia, said he had never seen anything to match Fiona even though he has "lived through some crazy weather."

He said that he and his family had a long night and that the winds had raged into the afternoon.

"We had put everything we could out of harm’s way, but the house got hammered pretty hard. Lost lots of shingles, heavy water damage in ceilings, walls, our deck is destroyed. A garage that I was building blew away," MacKay said in an email to AP.