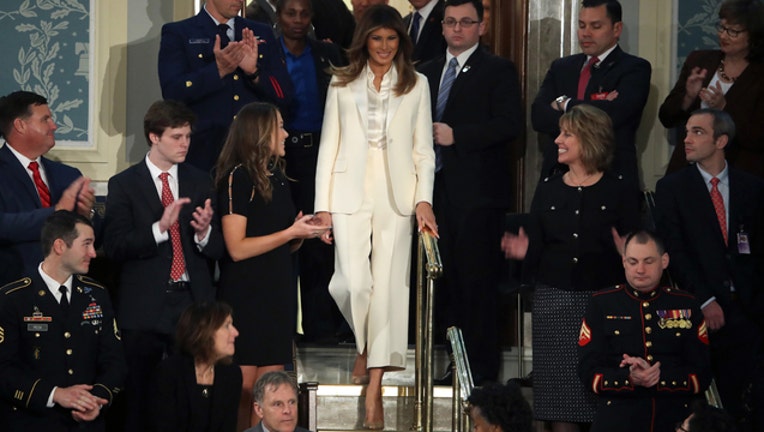 First lady Melania Trump arrives for the State of the Union address in the chamber of the U.S. House of Representatives January 30, 2018, in Washington, DC. (Photo by Mark Wilson/Getty Images)

WASHINGTON - (AP) -- Melania Trump has chosen a cream-colored Christian Dior pantsuit for her first State of the Union address as first lady.

The former fashion model paired the cropped-trouser suit with a white Dolce & Gabbana blouse and Christian Louboutin pumps. She wore her hair loose, and flashed a bright smile.

While her husband has put forth a mantra of "America First," Mrs. Trump has mostly opted for pieces from high-end European design houses during her first year as first lady. The brands she wore Tuesday are in keeping with that custom.

The first lady raised eyebrows when she wore a $50,000 silk D&G coat during a visit to Italy last year. Other designers she favors include Emilio Pucci, Valentino and Givenchy.

Mrs. Trump has not enjoyed the support from fashion designers that her predecessor did. Where former first lady Michelle Obama frequently collaborated with designers, most of Mrs. Trump's attire is bought off-the-rack without the designer knowing the garment is destined for the first lady.

"She does not concern herself with what others think about her fashion and always stays true to herself," Stephanie Grisham, a spokeswoman for the first lady, told AP earlier this year. "Mrs. Trump wears what she likes, and what is appropriate for the occasion."

Mrs. Trump made a solo entrance Tuesday and was seated next to 12-year-old activist Preston Sharp.