A line of slow-moving thunderstorms that dumped torrential rain across eastern Kentucky early Thursday is now being blamed for at least 30 deaths as floodwaters damaged hundreds of homes and vehicles and rivers and creeks rose out of their banks.

"We can now confirm that we have lost 30 Kentuckians to this flooding," Beshear said in a news conference. "The breakdown is seven in Breathitt, two in Clay, 16 in Knott, two in Letcher and three in Perry."

He expects the death toll number to continue to rise as "hundreds" remain unaccounted for in the state. 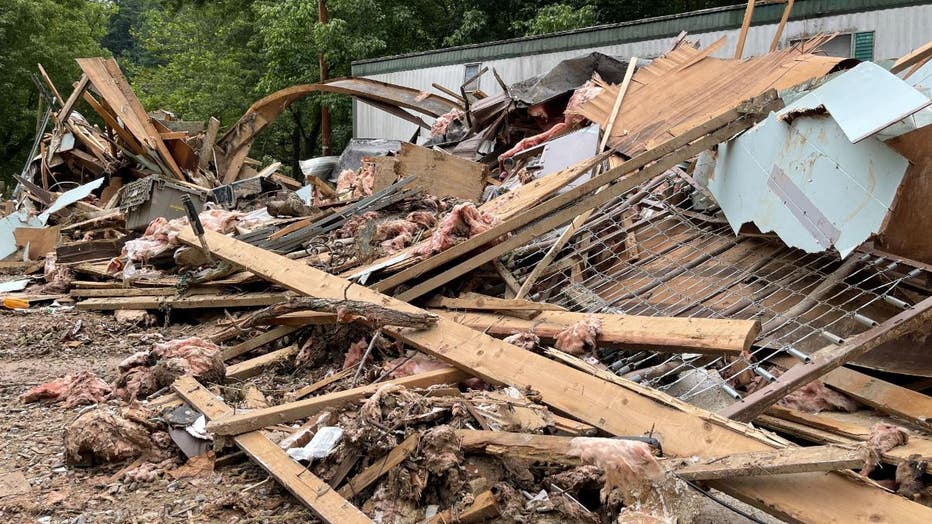 The governor said there have been 660 air rescues, with as many as 30 helicopters in the air. Hundreds of boat rescues were also conducted in the Bluegrass State.

Beshear mentioned Sunday that they have "hundreds of millions of dollars" in damage due to the flooding.

Kentucky Power said crews are working around the clock to restore power to more than 23,000 customers who lost power at the height of last Thursday's storm. Beshear said 12,492 people were still without electricity as of Monday morning.

The weather could impact recovery efforts this week as forecasters say there is severe storm potential Monday in many of the flood-ravaged areas in Kentucky, and that will be followed by a dangerous heat wave.

"The most risk is on the northernmost part of the impacted area where it is very unstable," Beshear said in a news conference Monday morning. "When the rain stops, it's going to get really hot."

The governor surveyed the damage last Friday along with FEMA Administrator Deanna Criswell in a National Guard helicopter.

"From everything we’ve seen, we may be updating the count of how many we’ve lost over the next couple of weeks," Beshear said Friday after an aerial tour of some disaster areas. 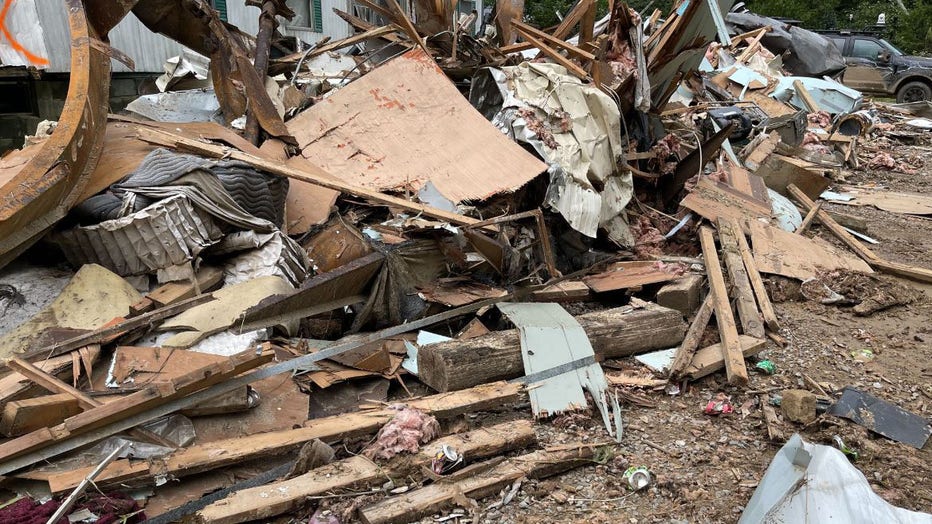 Among the 16 deaths in hard-hit Knott County are a 63-year-old man, a 65-year-old woman and two children. The bodies of two other children were recovered last Friday. The Lexington Herald-Leader reported the four children were swept away by floodwaters in Knott County.

‘HOUSES ARE FLOATING AWAY’: FAMILIES TRAPPED AS FLOODWATERS TEAR THROUGH EASTERN KENTUCKY

On Friday, President Joe Biden approved a disaster declaration for Kentucky, providing federal aid to support recovery efforts. FEMA teams have been on the ground since Thursday.

Three separate Flash Flood Emergencies were in effect early Thursday morning for areas around Hazard, Buckhorn and McRoberts. The National Weather Service allowed those emergencies to expire as the heaviest rain exited the region. 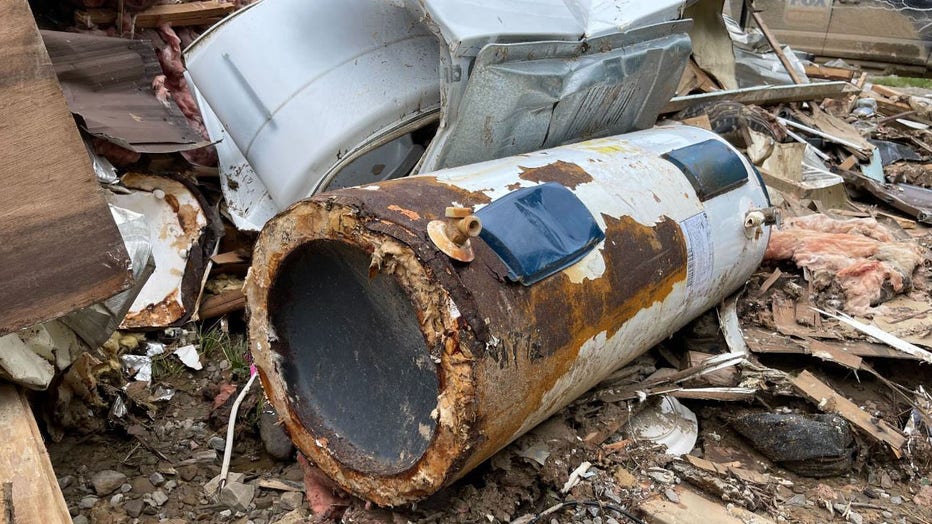 "Flash Flood Emergencies are issued only for exceedingly rare situations when we have life-threatening or catastrophic flooding ongoing within these communities," FOX Weather meteorologist Jane Minar explained.

Rescue efforts by local first responders and the National Guard continue across eastern Kentucky. However, the exact number of missing and unaccounted-for people is still unknown because cell service is down in many of the counties impacted by the floods.

"They see a number of people in Breathitt County alone on the roof, even we have some people in trees waiting for rescue," Beshear said Thursday afternoon in reference to what National Guard troops were encountering in the county some 70 miles southwest of Lexington. "This isn’t just a disaster. It is an ongoing natural disaster, and we are in the midst of it."

If someone wants to report a missing person, they are asked to call their local Kentucky State Patrol post instead of 9-1-1. Those local numbers are listed here.

More than 330 people are staying across 10 shelters open for flood victims in eastern Kentucky. 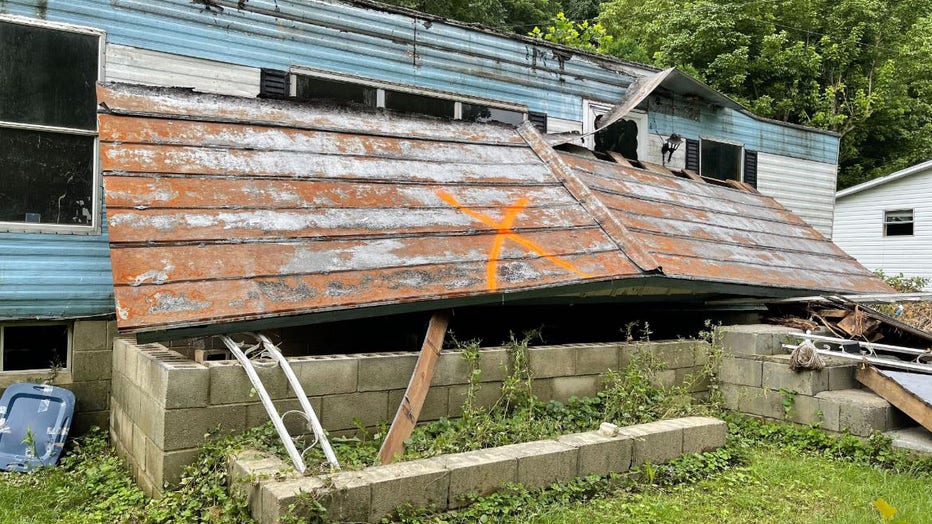 Over 330 people are staying across 10 shelters open for flood victims in Eastern Kentucky.

Videos and photos from Buckhorn showed a school that was almost entirely underwater, and officials said that the disaster might impact the return from summer break for students.

Many roads in this portion of eastern Kentucky were impassable because of high water, and West Virginia's National Guard members were mobilized and sent to the Bluegrass State to help with search-and-rescue efforts.

HERE'S WHAT TO DO AFTER YOUR CAR FLOODS 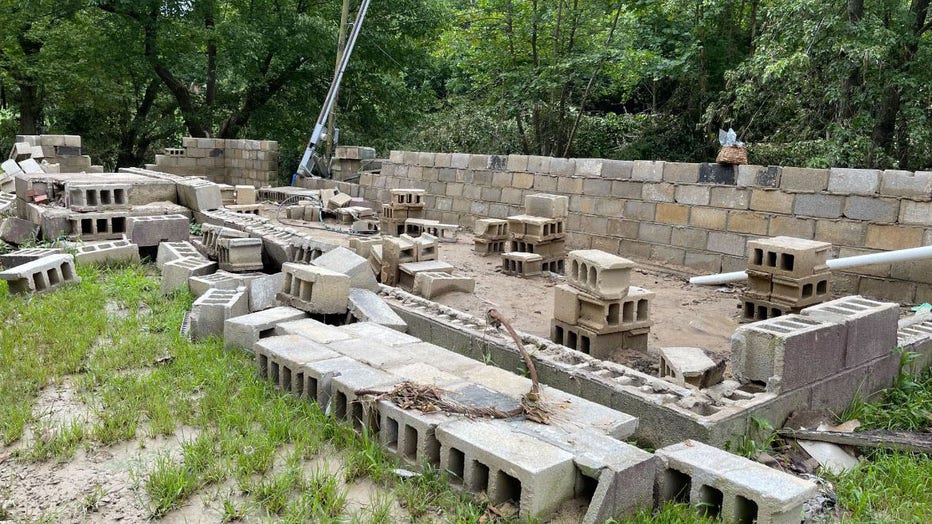 Roofs from houses continued to be carried downstream in the floodwaters more than 24 hours after the flood emergency began.

Last Friday, Criswell said from an aerial view that the extent of the long-term impacts was just becoming apparent.

"We saw many homes that are still inundated, that the water has not receded," the FEMA administrator said. "We also saw homes, I think, that are going to have access issues for some time just because the roads are out and bridges are out. And so we know that there is definitely some significant impact to the communities that we just flew over." 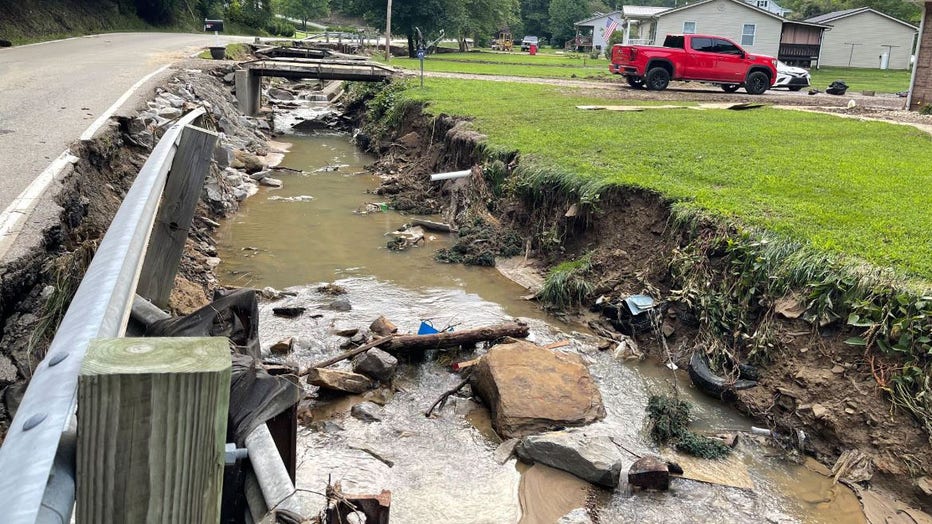 Between 7 and 10 inches of rain fell in parts of eastern Kentucky between Tuesday and Thursday of last week, most of which fell in just a few hours early Thursday morning. The cities of Hazard and Jackson both received nearly 8 inches.

Buckhorn saw the highest rain total, with a report of 10.40 inches of rain falling over those three days.

Infrastructure is a significant concern for rescue-and-recovery efforts. In Perry County, the governor said they are still trying to assess how many bridges the county lost in the flooding. Beshear noted that every culvert in low-lying areas in Letcher County is damaged. 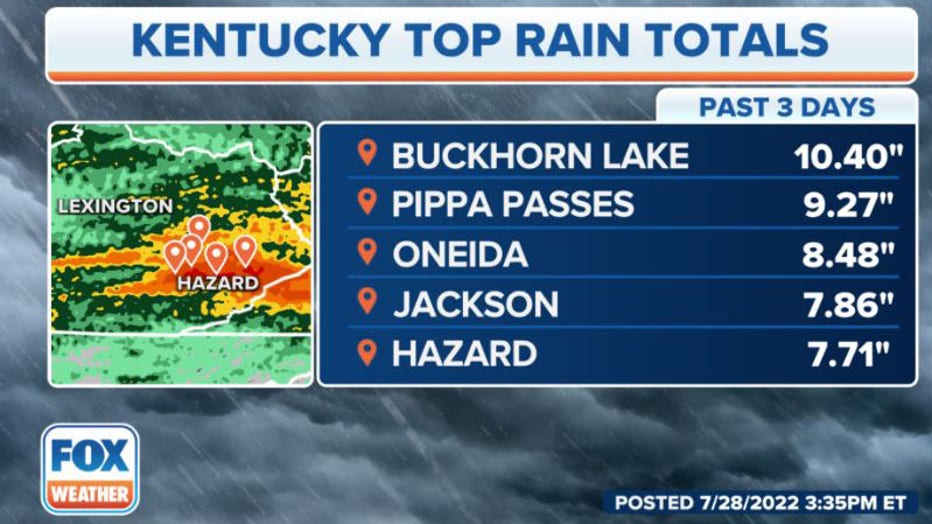 This catastrophic flooding in Kentucky came just two days after a historic flood in St. Louis killed one person last Tuesday when more than 9 inches of rain fell. 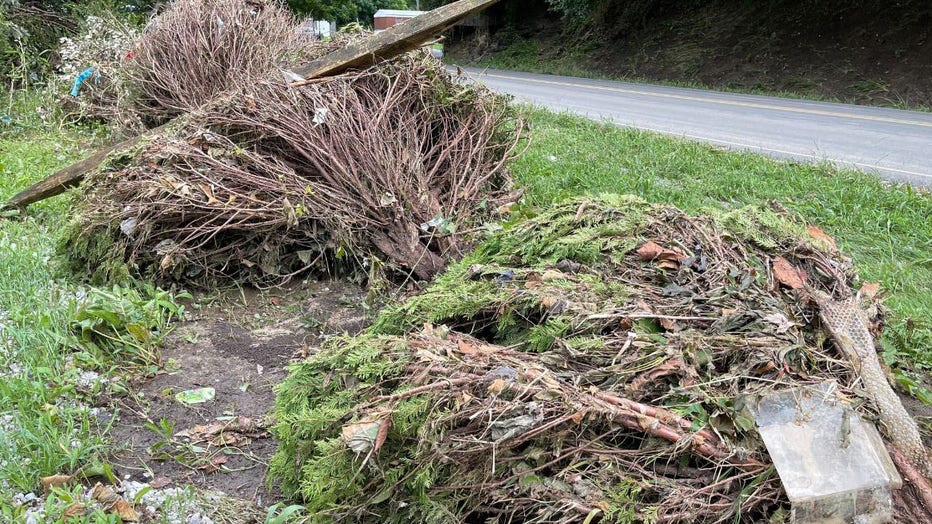 Here's how you can help the victims of the devastating flash floods in Kentucky.