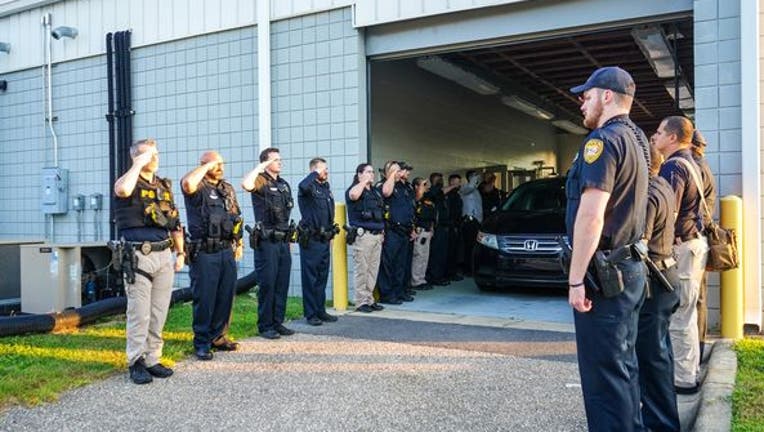 TALLAHASSEE, Fla. - The Tallahassee Police Department is mourning the loss of one of its own killed in the line of duty Wednesday.

The department announced in a social media post that one of its police officers died after a shooting suspect's vehicle crashed into his car.

The officer's name has not been released at this time.

According to police, the Leon County Sheriff’s Office received a call about an assault at a home on Saplin Court shortly before 12:30 a.m.

STORY: 4 dead, including 5-year-old girl, after SUV crashes into tree in Lake County

Officers said the suspect, identified as 37-year-old Tyrone Cleveland, went inside the home where he lives and reportedly shot three family members, before leaving in a vehicle.

Just before 1:30 a.m., an LCSO deputy and the Tallahassee police officer both came across the suspect at North Monroe Street and Capital Circle NW. Officers said Cleveland turned his vehicle around and began driving toward oncoming traffic, striking the Tallahassee officer's vehicle.

Authorities said the officer was taken to a local hospital where he later died from his injuries.

"We are working with the family and ask that you respect their privacy during this difficult time," the department said in a social media post. "We also ask that you keep our officers in your thoughts and prayers following this tragic loss."

Authorities said the three people he's accused of the shooting were taken to a hospital – two with non-life-threatening injuries and the other in stable condition.

An investigation is ongoing.