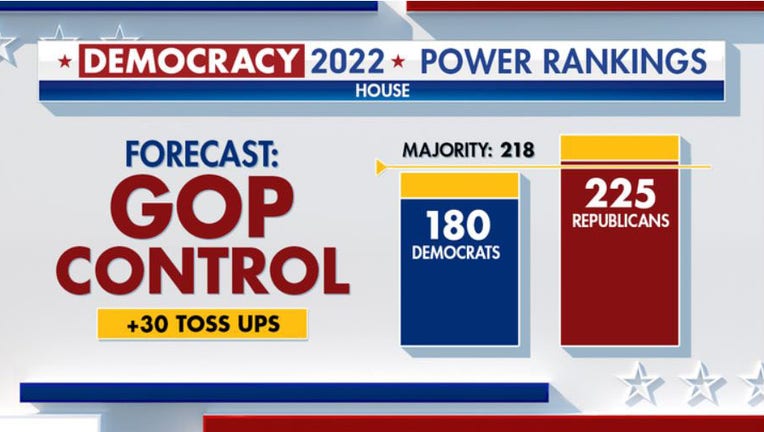 Republicans are forecast to take control of the House this November with at least seven seats to spare, leaving Democrats in need of a dramatic turnaround to hold on to power. This edition of the Fox News Power Rankings also unveils the U.S. House model for the first time and sees gubernatorial candidate Josh Shapiro, a Democrat, carving out a slight edge in Pennsylvania.

With redistricting completed and the bulk of the primaries behind us, the Power Rankings model now reveals a clear advantage for the GOP in the House. With 218 seats required to take control, the GOP is forecast to take 225 seats to the Democrats’ 180 seats. Those figures include only the races in which one party has an advantage. The actual size of a GOP majority will depend on how many highly competitive "toss up" races each party wins, but the Republicans are expected to gain at least a seven-seat majority (225 seats) and as much as a 37-seat majority (255 seats) in their "best case" scenario.

The range of scenarios for the Democrats leaves the party with as much as a 38-seat deficit (180 seats), or just eight shy of a majority (210 seats). That is significant. In other words, even if Democrats win all 30 races currently marked as toss-ups, the party still does not have enough support to retain control of the House.

Eagle-eyed Power Rankings readers would know that these ratings are just estimates, and that even races assigned to a party (particularly those in the "Lean" columns) are still very competitive. Nonetheless, the current forecast looks very cloudy for congressional Democrats. 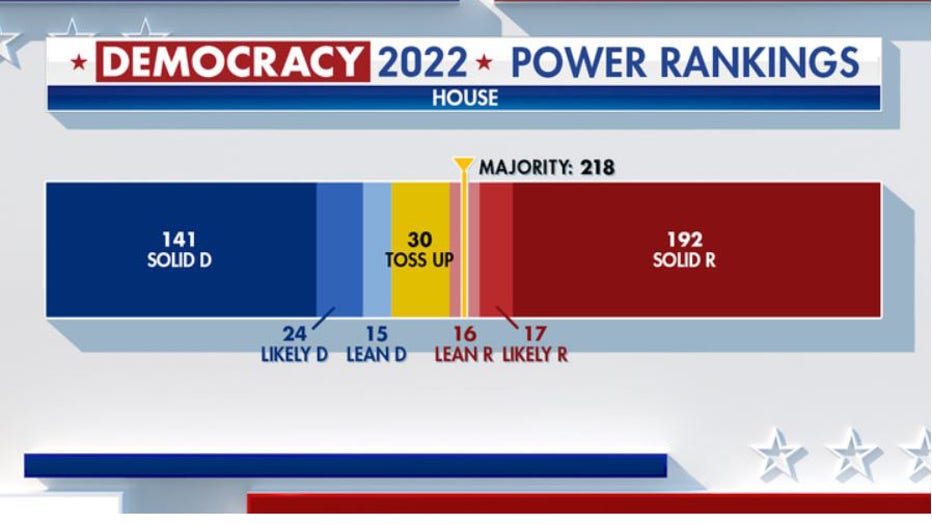 WHAT ARE THE FOX NEWS POWER RANKINGS?

Polling consistently shows voters have been frustrated about the rising cost of living, particularly in key categories such as food and gas. That frustration is reflected both in how voters feel about the issue and how they prioritize their concerns. Americans are punishing the president and, even if indirectly, congressional Democrats too.

As much as numbers explain this story, so does a peek into the decisions being made in battleground states. Senate candidate Tim Ryan, D-Ohio, skipped an appearance with Biden in Cleveland earlier this week, and Georgia gubernatorial candidate Stacey Abrams said she simply would welcome "anyone" to join her on the trail in a recent interview with "Fox News Sunday." Meanwhile, Democratic strategists have been expressing concerns about Biden’s ability to fight for their core priorities.

This translates into a congressional map where Republicans can retain the seats they need – and explore new territory. There are 13 seats held by Democrats in the "Lean R" and "Likely R" categories, but just one Republican-held seat in the "Lean D" or "Likely D" columns. That is TX-34, where newly sworn-in Rep. Mayra Flores will face a bluer redistricted electorate in November. This allows the GOP to play offense across the country. There are multiple pickup opportunities in swing states that have trended blue in the Trump era, like Colorado and Nevada. Even in Connecticut, a state that voted for President Biden by 20 points, five Democrat-held districts are competitive.

There is an asterisk here. Voters are still absorbing the impact of the Supreme Court’s decision to overturn the constitutional right to an abortion. A Fox News Poll conducted before the ruling in May showed that 63% of voters favored letting Roe v Wade stand. Only 11% believed that abortion should "always" be illegal, even as some Republicans in competitive districts campaign on a no-exceptions policy.

The reversal is likely contributing to a 1-2 point increase in support for Democrats in generic ballot polling, and the Democrat on the ballot in a Nebraska special election last week outperformed expectations after campaigning against the ruling. At the same time, abortion trailed inflation as a top concern for voters by 31 points in a Fox News Poll conducted two weeks before the ruling, and evidence has not yet emerged to show a shift in priorities. It is too early to tell if the Supreme Court's Dobbs ruling will improve the level of support for congressional Democrats in November.

Turning to the individual races, readers will notice that some of the most competitive districts share key qualities. 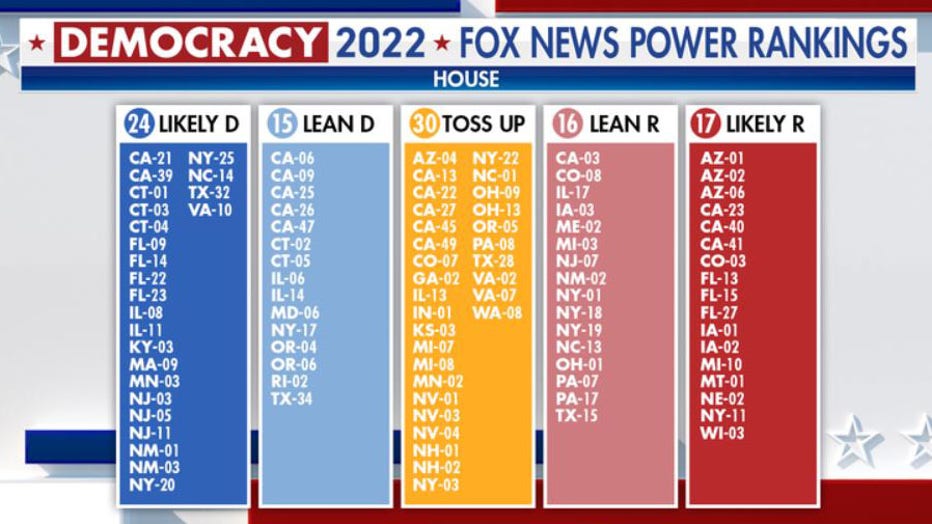 First, the House will be won in the suburbs. Several Democrats elected on a wave of support from suburban women in the Trump era are vulnerable in this set of rankings. Rep. Sharice Davids (KS-03), one of the first two Native American women elected to Congress, is fighting to hang on as the only congressional Democrat in Kansas in her heavily suburban district (ranked Toss Up). Her colleagues Rep. Susie Lee (NV-03) and Elaine Luria (VA-02) are also facing tough competition in the suburbs (both Toss Ups). As is Abigail Spanberger (VA-07), which may explain why she told the New York Times last year that "nobody elected [Biden] to be FDR." The prospects look slightly worse for Rep. Susan Wild (PA-07), whose district contains suburbanized areas of Allentown and Bethlehem, and whose race is ranked Lean R. All five women were first elected in 2018, and all five face female Republican challengers campaigning extensively on the cost of living and education.

Democrats also risk losing key districts with high Hispanic populations. The closest battle on the map will take place in TX-28. Incumbent Rep. Henry Cuellar will try to persuade his party that his brand of centrism is more appealing to Hispanic voters than a progressive platform. That race is ranked Toss Up. On the East Coast, incumbent GOP Rep. Maria Salazar faces a slightly more liberal electorate after redistricting, but FL-27 is also home to a large Cuban population. Those voters have gravitated toward the GOP in recent surveys. If Republicans can retain Flores’ district in TX-34, currently ranked Lean D, that will also indicate that Hispanics are fleeing from the left.

Trump’s influence on the Republican Party will also be tested this cycle. In OH-13, Trump has endorsed social media influencer and former campaign surrogate Madison Gesiotto Gilbert. She will attempt to flip the newly redistricted 13th on her connections to the 45th president in a battle against State Rep. Emilia Sykes. That race is a Toss Up. Keep an eye on NC-13 as well, featuring Republican former college football star Bo Hines. This race is ranked Lean R, and will test whether Hines’ endorsement from both Trump and the far-right Freedom Caucus will appeal to exurban district voters.

Finally, some of the 333 districts in the "Solid" columns offer some insight into the state of the full political spectrum. Even as the Power Rankings anticipate a reduction in the size of the Democratic caucus, the influence of the far-left "Squad" is expected to grow. Candidates Summer Lee (PA-12) and Greg Cesar (TX-35), who favor Medicare for All and the Green New Deal, are both running in "Solid D" districts.

On the right, it is more about consolidation. Controversial Reps. Matt Gaetz and Marjorie Taylor Greene are both expected to retain their Solid R districts. Incumbent Rep. Lauren Boebert (CO-03) is more vulnerable with a "Likely R" ranking, but it would be a surprise to see a district held for more than 11 consecutive years by a Republican flip back to the Democrats in this national environment.

MEDIA CONSERVATIVES SPLIT OVER TESTIMONY AGAINST TRUMP, SOME STRONGLY DEFENDING HIM

If that environment changes over the months ahead, the House model stands ready to react. However, as of July, the overall math looks good for Republicans. With the Power Rankings forecasting a majority of between 7 to 37 seats, the most likely outcome in November is for the GOP to govern in the lower House.

Senate: Republicans in the lead, but taking a majority still depends on the Toss Up races 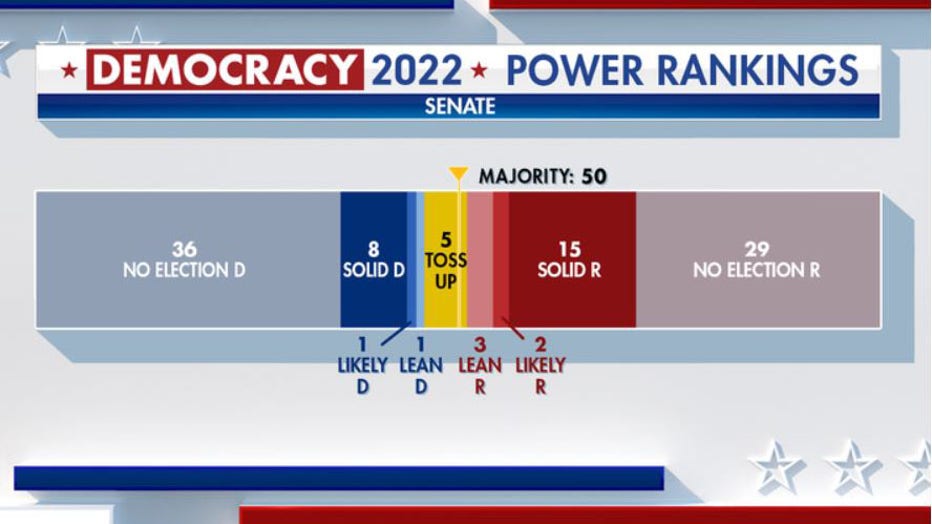 The Senate Power Rankings, which remain intact from the previous edition of this column, paint a somewhat rosier picture for the Democrats. The GOP has a higher number of races in its party columns than the Democrats, but neither has enough for a majority without including Toss Up races.

To be clear, Republicans still have the edge here. With a total of 49 seats across the Solid R, Likely R & Lean R columns (plus 29 seats not up for election in 2022), the GOP has to win only two of the five Toss Up races to take control of the Senate, whereas the Democrats need to win four of those races just to reach a 50-seat "majority" with the aid of Vice President Kamala Harris. However, those Toss Up states are still too competitive to give either party the advantage. The category includes Arizona, Georgia, New Hampshire, Nevada and Pennsylvania. 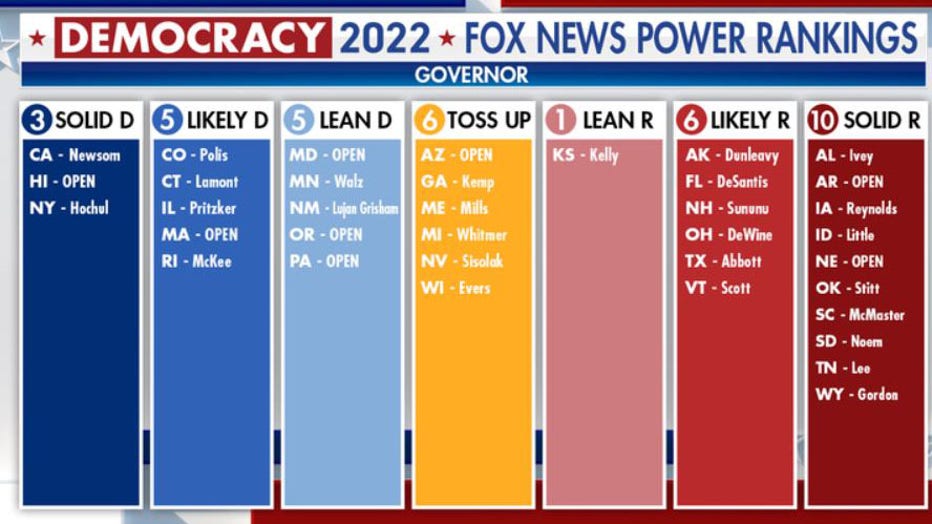 On the gubernatorial side, Pennsylvania shifts out of the Toss Up category and into Lean D, which means Democrat Josh Shapiro has a slight edge to retain the state in 2022.

Two things have happened in the Keystone State since the last set of Power Rankings. First, primary voters chose Democrat Attorney General Josh Shapiro and Republican state Sen. Doug Mastriano as their major party candidates. Mastriano is running on a set of far-right Republican policies, including turning Pennsylvania into a "Second Amendment Sanctuary" and endorsing fringe conspiracy theories. Mastriano was also questioned by the FBI after he was seen outside the U.S. Capitol on Jan. 6, 2021. The sitting state senator is going to have a hard time convincing voters in a state that voted for President Biden that he is the best choice to lead them into 2024.

WHY DEMOCRATS ARE NOT PURSUING A CONSTITUTIONAL AMENDMENT FOR ABORTION RIGHTS? 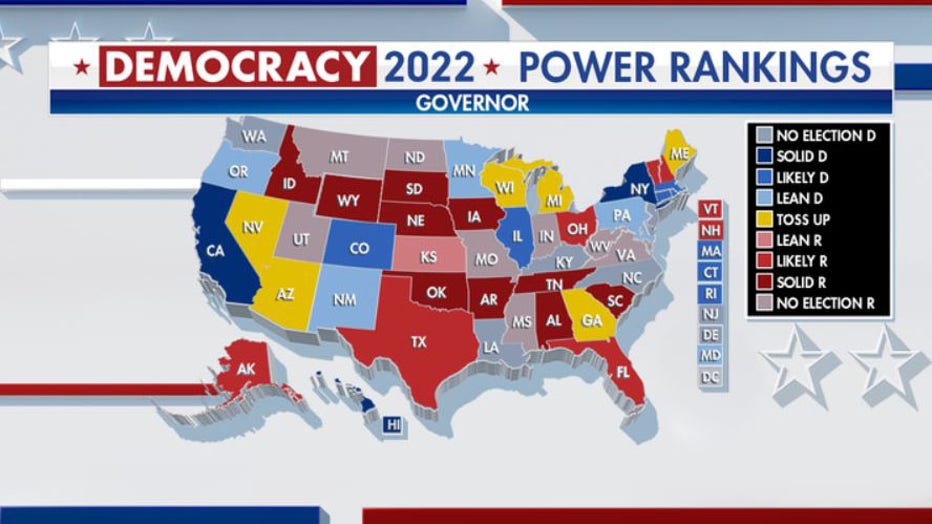 Second, while it is too soon to tell the impact of overturning Roe v. Wade in the House forecast, the decision has the greatest impact on gubernatorial races, where state leaders will now be responsible for setting abortion access legislation. Mastriano would ban abortion with no exceptions, even to save the life of the mother. That is an unpopular position in the Keystone State, where according to a pre-ruling Suffolk/USA Today poll, 58% of likely voters say abortion rights should be protected. By contrast, Shapiro has made abortion access a key plank of his platform.

Bear in mind that the same Suffolk poll showed Shapiro had just a four-point lead against Mastriano (44% for Shapiro and 40% for Mastriano, within the poll’s ±4.4 point margin of error), so this remains a hotly competitive race. Pennsylvania moves to Lean D.

Among the 19 states yet to choose their major party candidates, there are still several critical showdowns left on the primary calendar. On Aug. 2, look out for pivotal elections for Senate and governor candidates in Arizona, plus a batch of fascinating House primaries in Washington. Two weeks later, primary voters in Alaska and Wyoming will decide the fate of both Sarah Palin and Rep. Liz Cheney. Then, on Aug. 23, voters will go to the polls in Florida and for congressional districts in New York, where big names like Reps. Jerry Nadler and Carolyn Maloney, plus former far-left Mayor Bill de Blasio, are all on the ballot.

Meanwhile, the general election is just over the horizon. As of this writing, there are 120 days to go until election night on Nov. 8, which means a deluge of news and data is about to start flowing from campaign trails across the country. The Fox News Political Unit has you covered from all angles with the latest on-the-ground reporting and sharp analysis as Democracy 2022 continues.