Dangerous conditions on the roads

The slick roads caused dozens of crashes in the New York area on Wednesday morning.

Numerous accidents were being reported in parts of New Jersey and New York.

A Winter Weather Advisory was posted for much of the area, including New York City, through 10 a.m.

The National Weather Service warned that freezing rain/drizzle combined with temperatures that were at or below freezing were causing dangerous conditions, especially since road surfaces were already cold.

Drivers were urged to use causing due to black ice conditions.

On Long Island, Nassau County Police warned that all lanes of Northern Boulevard were closed between Mill River Road and Remsen Land due to an icing condition.  It was also closed in the area of the Roslyn Viaduct due to icing.

In New Jersey, traffic leading to the Holland Tunnel faced an hour back up after a crash on Rt. 1-9 caused delays on both the Pulaski Skyway and Covered Roadway/Rt.-139.

An overturned vehicle near Sayreville was causing big delays on the Garden State Parkway.

A fatality was reported in a crash on Rt. 34 in Old Bridge in Middlesex County.

Another deadly crash was reported on Route 3 at the Hackensack River Bridge in East Rutherford.

Six people were taken to hospitals after a multi-vehicle accident off of Route 18 & Route 36 E in the Eatontown/Tinton Falls area of Monmouth County.

Numerous other roads were closed due to crashes.

The Goethals Bridge between New Jersey and Staten Island was closed in both directions for periods of time due to icy conditions.

There were crashes on the Major Deegan Expressway in New York City due to icy conditions. (video courtesy Jodi Kaltner)

In New York, the Palisades Parkway southbound had two lanes blocked due to an accident near Exit 6.

More than a dozen cars crashed on the Hutchinson River Parkway when they skidded on black ice on a bend in the road in Pelham.

The New England Thruway southbound lanes were closed in the area of the Connecticut state line due to a crash.

A deadly crash was reported at 6:30 a.m. on the ramp connecting the eastbound Cross County Parkway to the northbound Bronx River Parkway in Westchester County. 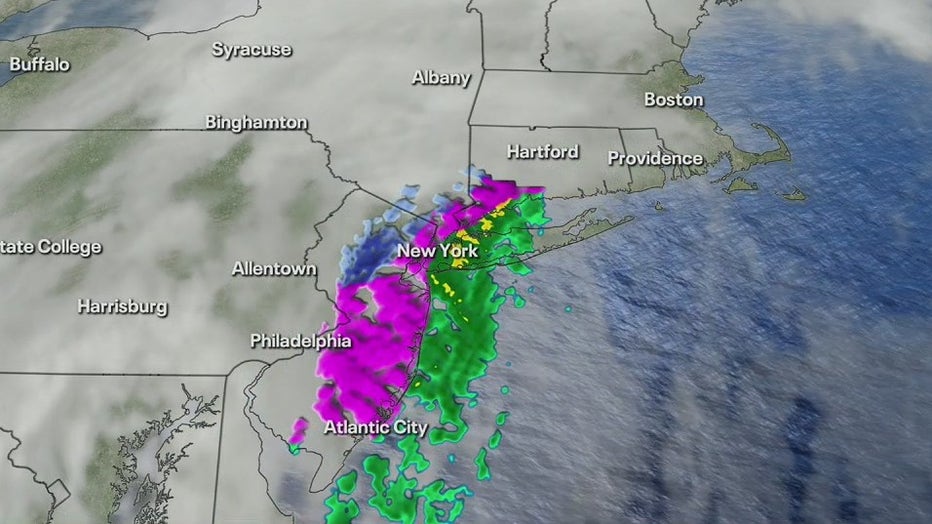