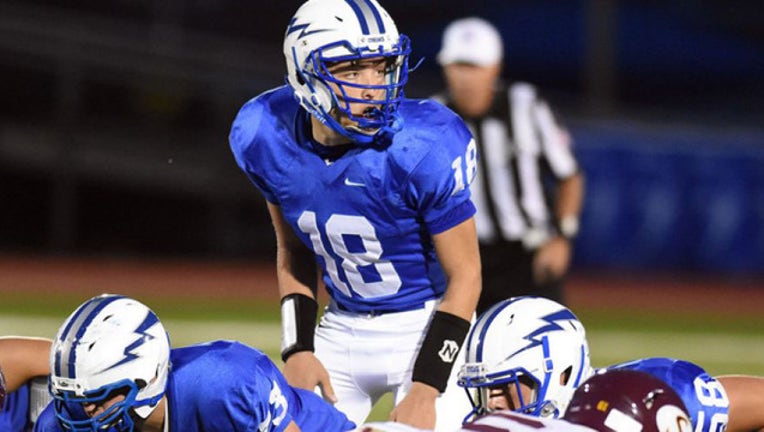 NEW JERSEY (FOX5NY) - Funeral services have been scheduled for a New Jersey high school star quarterback who died after suffering an injury on the field.    Officials have not yet said what caused the death of Evan Murray.  The 17-year-old Warren Hills Regional High School player walked off the field under his own power Friday night after taking a hit in the backfield late in the second quarter. A short time later, he collapsed.

Witnesses say Murray felt "woozy" after the tackle but tried reassuring his teammates he would be fine as he was lifted on a gurney and taken to a hospital. He was pronounced dead a short time later.

Murray's viewing will be held Wednesday from noon until 9 p.m. at Faith Discovery Church in Washington Township. The funeral will be held Thursday at 11 a.m. at the church.

Murray had been the football team's starting quarterback for three years.

A statement from interim Superintendent Gary Bowen said the school community is "deeply saddened" by his death. Bowen declined to take questions from reporters Saturday, saying a cause of death has not yet been determined. Authorities said an autopsy was planned.

"He tried giving a thumbs-up to the rest of the team, and all of us cheered," said Kaitlin Bell, 16, a junior varsity cheerleader. "Our coach was telling us he was going to be all right. We didn't expect anything would happen."

Coaches, students and community members gathered at the school's football field Saturday for a memorial.

Members of the school community said they were shocked by Murray's death.

"I can't comprehend what happened," said one parent.

Taylor Coughlin, a 16-year-old junior at the school, told The (Easton) Express-Times that she had first met Murray in the seventh grade. She said he was "an amazing student and an amazing athlete. He stood out in his athletics, his academics — everything."

"A lot of people were in disbelief and didn't want to believe it," she said.

New Jersey Gov. Chris Christie and the New York Jets football team were among dozens of people and groups from around the country who posted condolences via social media Saturday.

Murray's wake will be held Wednesday at Safe Discovery Church in Washington Township. The funeral will be held Thursday morning at the church.