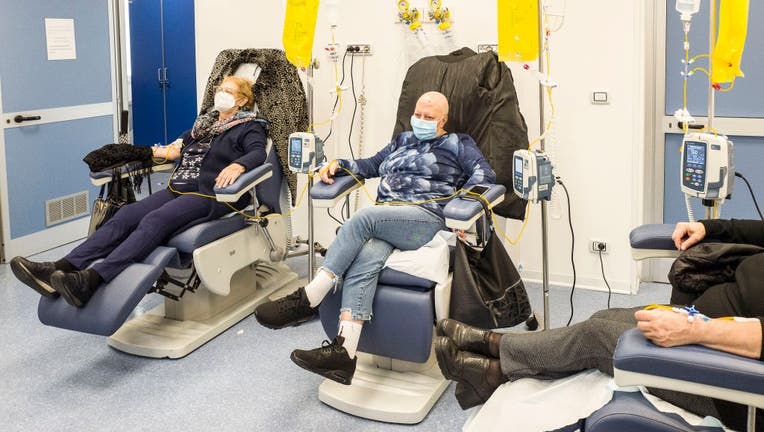 CATANIA, ITALY - NOVEMBER 24: Two cancer patients attend a chemotherapy session in the Medical Oncology department headed by Dr Giusi Scandurra of Cannizzaro hospital on November 24, 2020 in Catania, Italy. In the Oncology and Senology departments of

LONDON - Researchers say a genetically modified herpes virus is showing promise in fighting against a range of advanced cancers in early trial results.

A team from The Institute of Cancer Research, London, and The Royal Marsden NHS Foundation Trust, said the virus, RP2, proved to be effective in a quarter of patients taking part in the experiment.

They presented their findings at the 2022 European Society for Medical Oncology (ESMO) Congress.

The patients had various forms of cancer including skin, esophageal, and head and neck. Researchers said the patients had exhausted other treatments.

Researchers said they injected the RP2 virus directly into the cancer tumors. It then multiplied inside cancer cells, causing them to burst from within. The virus also blocked the protein CTLA-4, which helped the immune system destroy the cancer cells.

Sekope Sharits and his mother spoke with FOX Television Stations about the challenges they face.

Results showed that some patients treated with RP2 saw their cancer tumors shrink. One saw cancer completely disappear and has been cancer-free for 15 months after starting the treatment. Other patients saw various promising results.

The herpes virus did produce some mild side effects including fever, chills, and fatigue.

"Our study shows that a genetically engineered, cancer-killing virus can deliver a one-two punch against tumours – directly destroying cancer cells from within while also calling in the immune system against them,"  study leader professor Kevin Harrington said in a news release.

"It is rare to see such good response rates in early-stage clinical trials, as their primary aim is to test treatment safety and they involve patients with very advanced cancers for whom current treatments have stopped working," he continued.

Wesley Culver, 17, spoke with FOX Television Stations about how his bout with cancer helped him discover his artistic side.

The team will now expand their study to test a larger number of cancer patients.

According to the U.S. Centers for Disease Control and Prevention, cancer was the second-leading cause of death, after heart disease, in the U.S. in 2020. That year, there were 602,350 cancer deaths.