Charles Farmer, of Cherokee County, says he was in his twenties and newly married when he started feeling pain in his groin, all over his body, and tenderness in his breast. An ultrasound was what confirmed that Farmer had a suspicious mass in his testicle where he then had surgery to get it removed.

ATLANTA - Charles Farmer of Cherokee County, Georgia, was twenty-something and newly married, when he started feeling like something was off.

At first, Farmer did what a lot of young guys would probably do: nothing.

"I felt like it was something that would go away, or I thought maybe I pulled a muscle or something," Farmer remembers.  "And I'd felt that pain down there before. So, I felt it would just run its course." 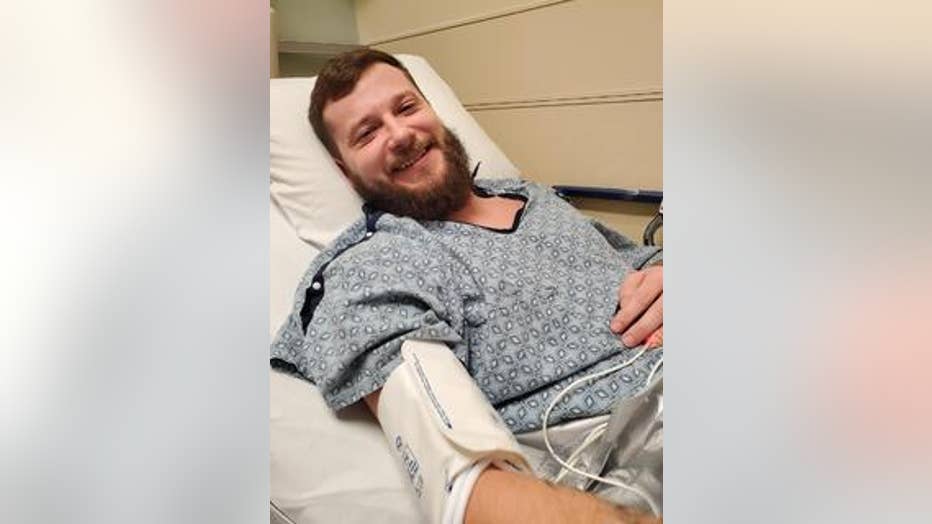 Charles Farmer on the day of his testicular cancer surgery.

Farmer did not realize it then, but two of the symptoms he was experiencing, the breast tenderness and pain and infertility can both be signs of testicular cancer.

By the time he felt a mass in one of his testicles, and went in to get it checked, he says, and his wife been trying to get pregnant for some time.

"But nothing was happening," Farmer says.  "Really, I went in just for a checkup, not even thinking that was on the line, or even on the table.  I didn't even know what I was going in there for. I was going it for what I thought was a general checkup."

Instead, after an ultrasound confirmed a suspicious mass in his testicle, Farmer came to see Dr. Bryce Wyatt at Georgia Urology.

"Actually the day I met him is the day we ended up doing the surgery," Dr. Wyatt says.

The average age of diagnosis is 33, and Wyatt says younger men may overlook the symptoms.

"It's oftentimes missed, because people are afraid to go to the doctor, and when they do go, they wait months before they typically show up," he says.

That is what happened with Charles Farmer: he waited.

After an ultrasound revealed a suspicious mass in one of his testicles, he came to see Dr. Wyatt.

"The day I met him, he was concerned, he looked scared, and I felt for him," Wyatt remembers.  " I wanted to get this taken care of as soon as possible.  He had some other signs of breast tenderness and swelling and those are concerning to be for metastatic spread, meaning the cancer had moved to other places.  And the quicker we got that taken care of, the lower I could reduce that risk of spread."

Within hours of their meeting, Charles Farmer was in surgery, to remove his cancerous testicle.

"I really started to think, what is the next step, what happens after this, or what does this mean for me being able to have kids," Farmer says.

His cancer has not spread, so Farmer did not need chemotherapy or radiation, and his remaining testicle is cancer-free.

Farmer is now nearly 2 years out from his surgery and shows no signs of cancer.

"Cancer, to me, is just a word," Farmer says.  "There is nothing you can do to change it.  It's only what you can do going forward."