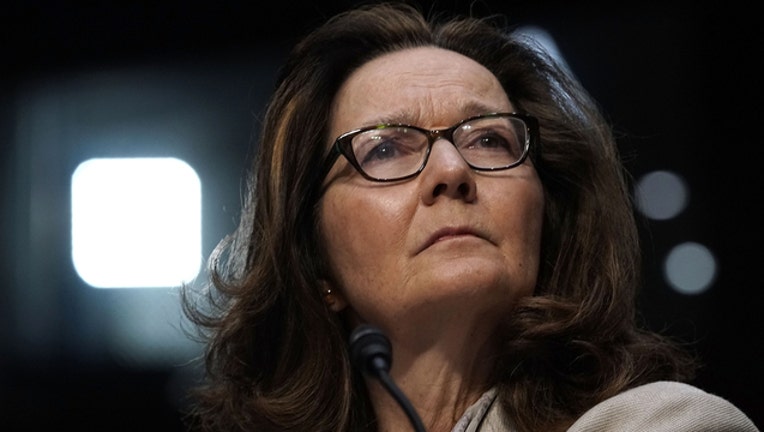 CIA Director nominee Gina Haspel speaks during her confirmation hearing before the Senate (Select) Committee on Intelligence May 9, 2018 in Washington, DC. (Photo by Alex Wong/Getty Images)

LANGLEY, Va. - (AP) — New CIA Director Gina Haspel pledged to send more spies into the field during her swearing-in Monday as President Donald Trump offered up praise for the rank-and-file, who felt snubbed during his first visit to the headquarters of the premier U.S. intelligence agency.

"We must learn from the past, but we cannot dwell in the past," said Haspel, whose ascent from undercover operative to the top job was challenged because of her role in a program to harshly detain and interrogate terror suspects after 9/11.

"We must constantly learn, adjust, improve and strive to be better. We demand it of ourselves and America deserves nothing less," she said, drawing loud applause from her co-workers assembled inside the headquarters at Langley, in northern Virginia.

Haspel, 61, succeeds Mike Pompeo, whom Trump tapped to become secretary of state. Pompeo was present at the swearing-in and the oath was administered by Vice President Mike Pence.

Critics have said Haspel's role in the non-banned program should have disqualified her from becoming CIA director, although she has vowed not to restart it. Her supporters cited her three decades of experience at the spy agency both domestically and at many posts abroad.

Haspel, who has spent 33 years with the CIA, pledged to boost foreign language proficiency, strengthen the CIA's partnerships with intelligence agencies in the U.S. and abroad and deploy more officers to the field. She said the CIA also needed to focus on strategic threats to U.S. national security as well as the ongoing one from global terrorism.

As the first female CIA director, Haspel said she was indebted to female intelligence officers who blazed the trail for women in the field. "I stand on the shoulders of heroines who never sought public acclaim, but served as inspirations to the generations that came after them," she said.

She also referenced her rocky confirmation during which lawmakers had called for her mostly classified past career to be open to public scrutiny.

"It has been nearly 50 years since an operations officer rose up through the ranks to become the director, and after the experience of the last two months, I think I know why that is," Haspel joked.

Trump said she showed courage during the Senate confirmation process in the face of "very negative politics."

The president struck a different tone than on his previous visit to CIA headquarters. He hailed the agency rank-and-file, calling them the "most elite intelligence professionals on the planet" and promised them the "the tools, the resources and the support they need."

When Trump visited the CIA headquarters in January 2017, one day after taking office, it was on the back of his repeated criticisms of the U.S. intelligence community over its conclusion that Russian had interfered in the presidential election.

That day, many of his remarks were focused on settling scores with the media. His comments raised the ire of former intelligence officials because he spoke in front of a wall marked with stars representing fallen CIA officers, which was viewed as disrespectful.

This year, he paid tribute to the lost lives, saying "their stories of service and sacrifice and daring will live for all time."

Only hours before Trump visited CIA headquarters, he was promoting criticism of former CIA Director John Brennan. He suggested Brennan was to blame for the investigation into possible collusion between the Trump campaign and Russia.

Brennan became the agency's director in 2013 under President Barack Obama and served until January 2017. He has been a vocal critic of Trump.

On Sunday, Brennan warned Senate Majority Leader Mitch McConnell and House Speaker Paul Ryan, tweeting: "If Mr. Trump continues along this disastrous path, you will bear major responsibility for the harm done to our democracy. You do a great disservice to our Nation & the Republican Party if you continue to enable Mr. Trump's self-serving actions."