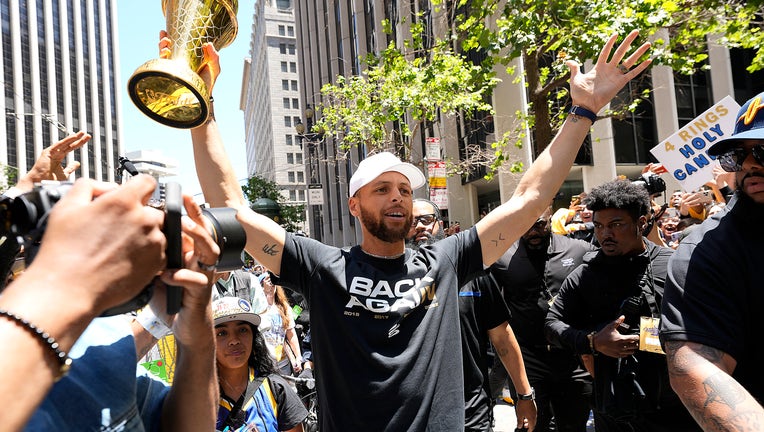 SAN FRANCISCO - Blue and yellow swirled in the skies on Monday as the Warriors celebrated their fourth NBA title in eight years.

It was even more sweet because it was in San Francisco, the team's home since 2019.

"Our team is doing great now," said Nicole, who came all the way from Tracy with her family. "They represent the bay. We all come together to love our team."

The team and Coach Steve Kerr were honored with trophies and confetti. Steph Curry, Klay Thompson and Draymond Green were all the stars of the show.

Kerr wore a shirt that simply said "Night, night," and he joked about how the team was at a low point a couple of years ago.

"We kinda stunk for the last two years," he said. "I don't know if you noticed that."

Eager fans lined up on Market Street as early as 5:30 a.m. for the parade, which started six hours later. 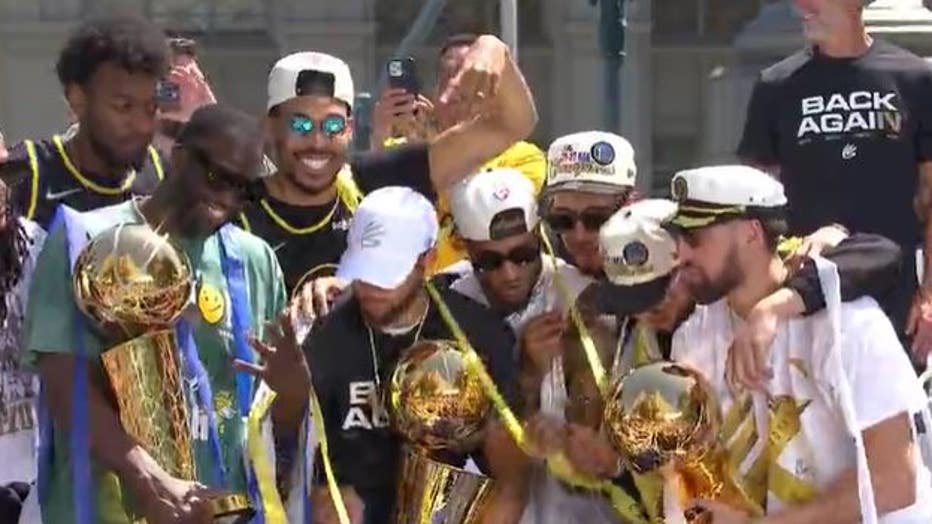 Draymond Green (left) and the Warriors take gold during the championship parade. June 20, 2022

One fan brought a yellow sign that read "Ayesha CAN Cook," in reference to the back-and-forth trash talk of Steph Curry's wife by a Boston restaurant.

Ayesha Curry took that jab and ended up selling T-shirts touting her cooking skills and donating the proceeds to curb childhood hunger.

Eric Bautista came to the parade from Arizona. Sure, he likes the team's superstars.

But he actually was there to show his excitement for Warriors player Juan Toscano Anderson, who became the first Mexican player to win an NBA championship.

Others got good vantage points from high up.

"Yeah, I'll be on the 20th floor today," said Sean Hennessy of Windsor. "I'll be looking down on the parade. It should be super fun. I'm sure it will be super packed. Everyone will have a blast."

Hennessey has been a basketball fan since "you could afford to go to games" at the Warriors' former Oracle stadium in Oakland before they moved to San Francisco.

Much to the dismay of Oaklanders, the Golden State Warriors left the aging stadium in the East Bay for shinier new digs in San Francisco at Chase Center.

Still, the East Bay has much love for their old team.

In fact, the Cal band came out to root on Warriors and a man with 200 pounds of confetti was hired to shoot off the colored pieces of paper into the street from a confetti canyon.

"You just look for the cars," he said with a smile. 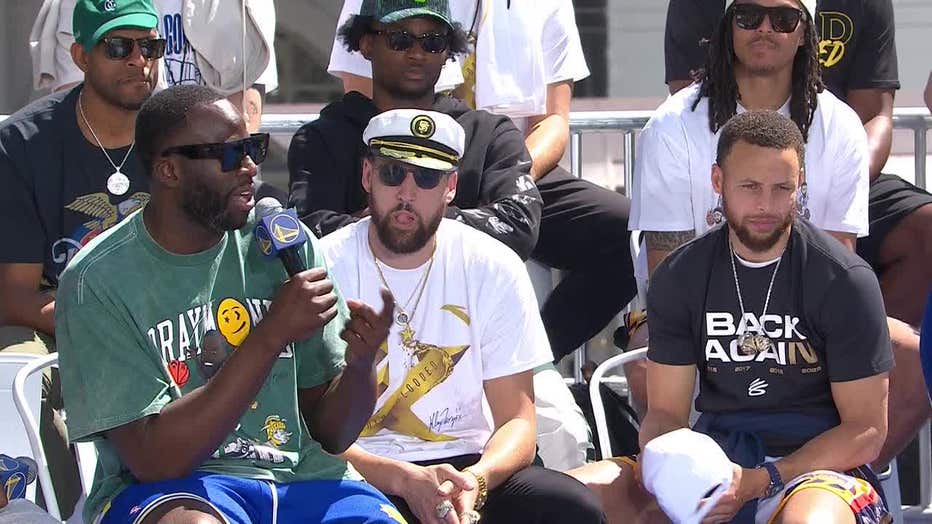 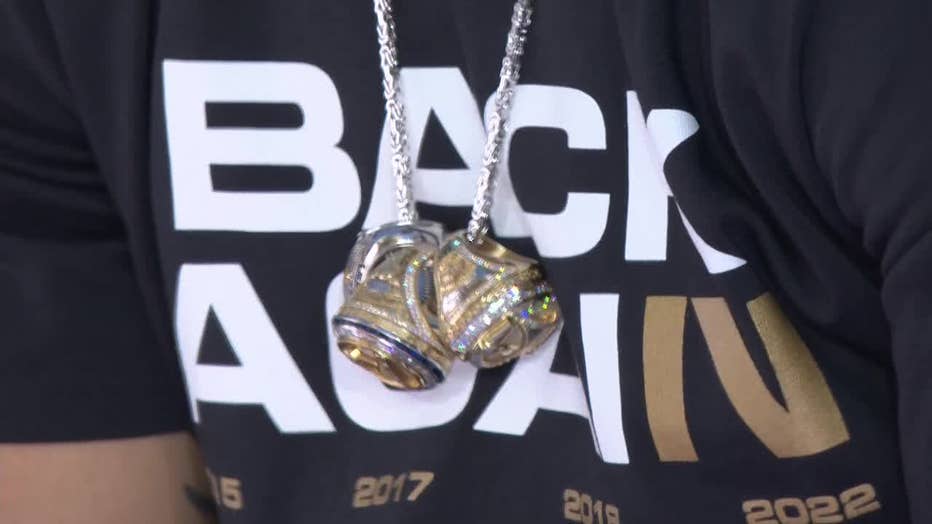 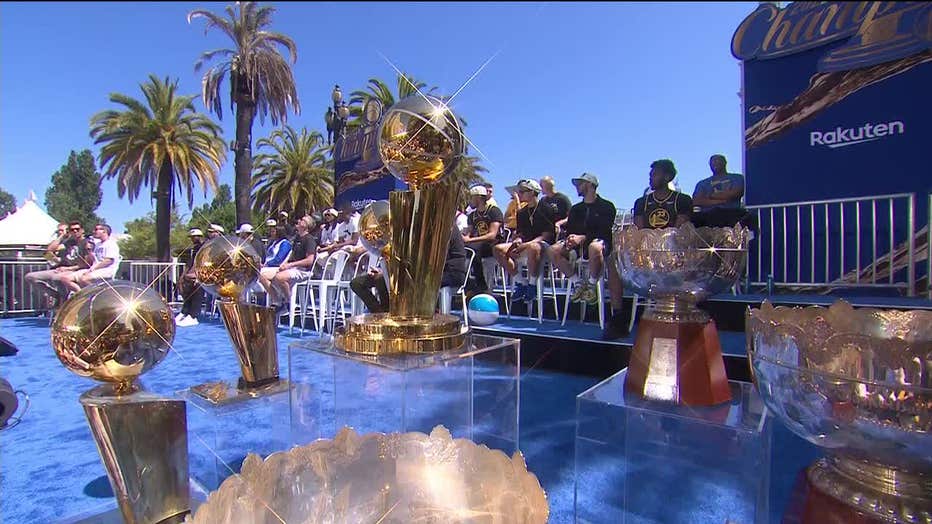 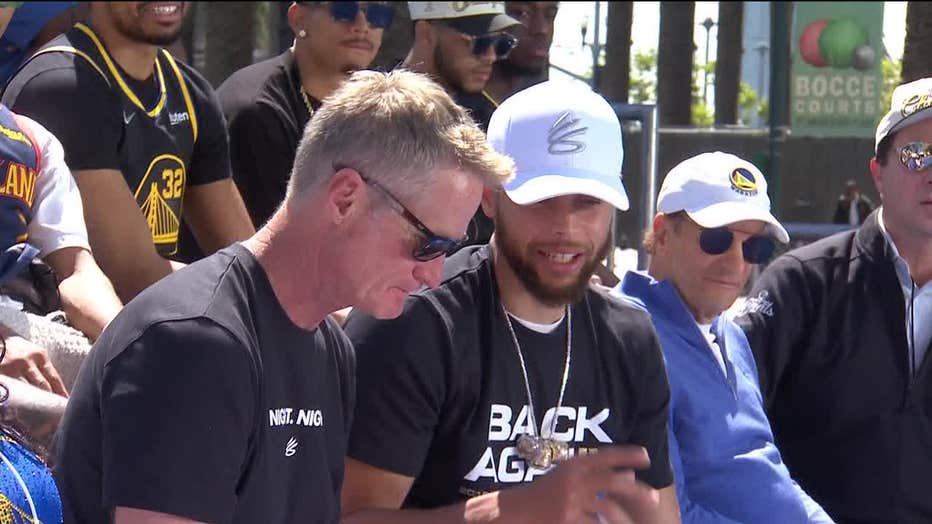 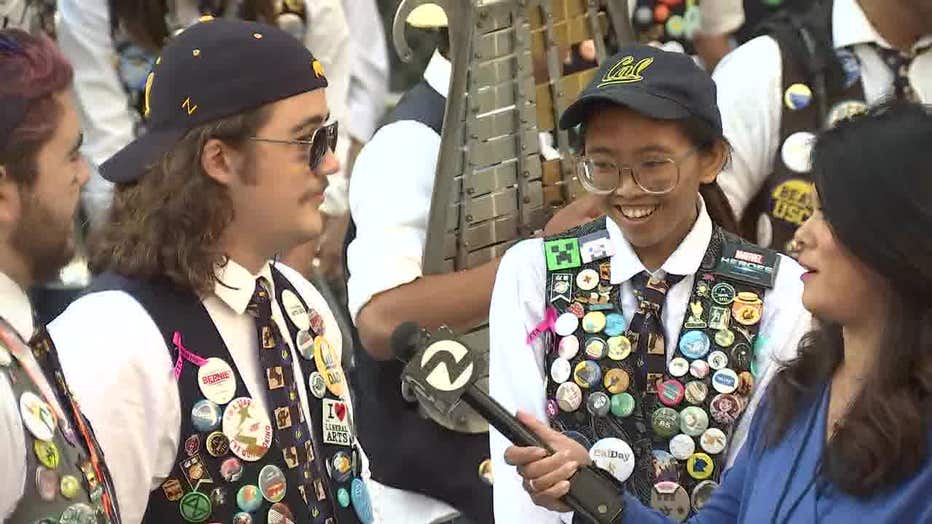 Cal band members were asked to play at the Warriors parade. June 20, 2022 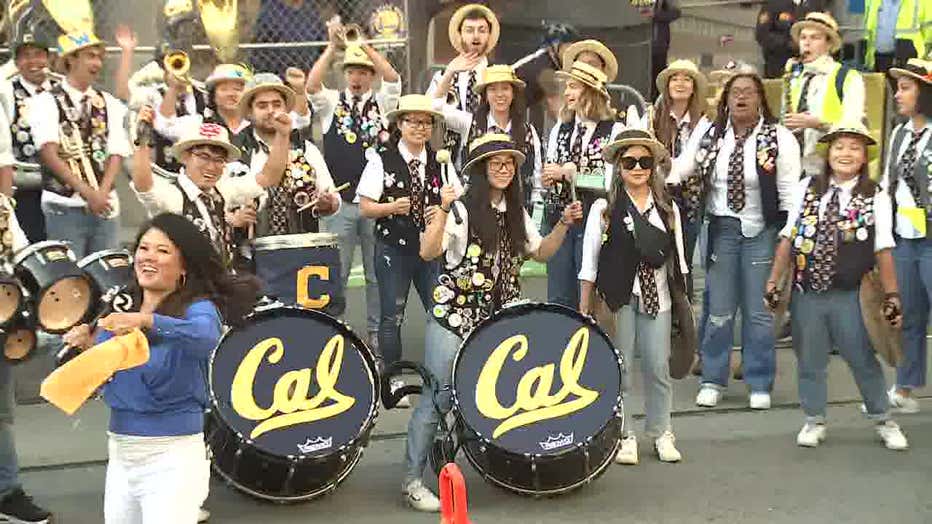 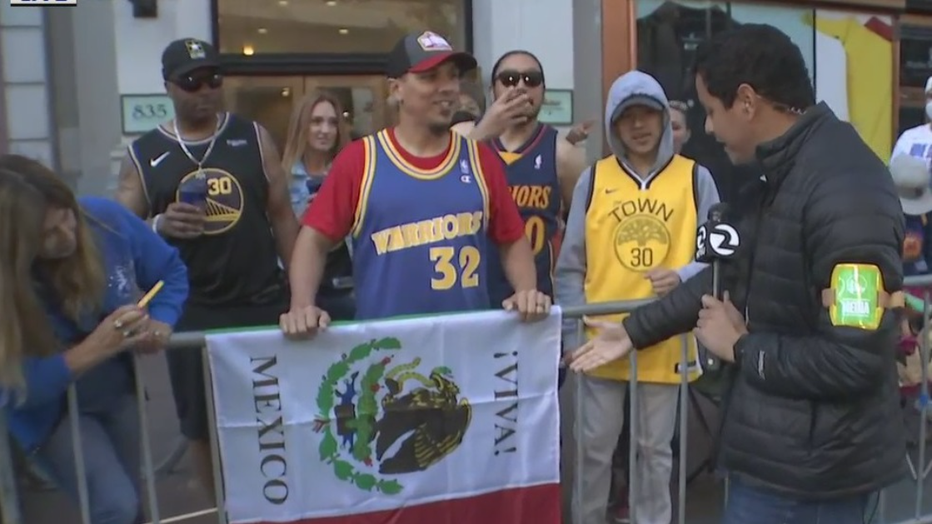 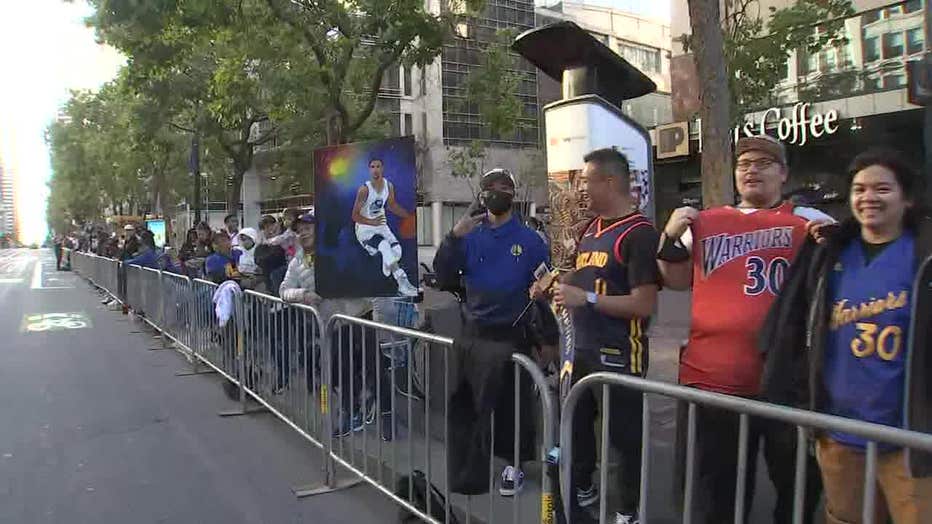 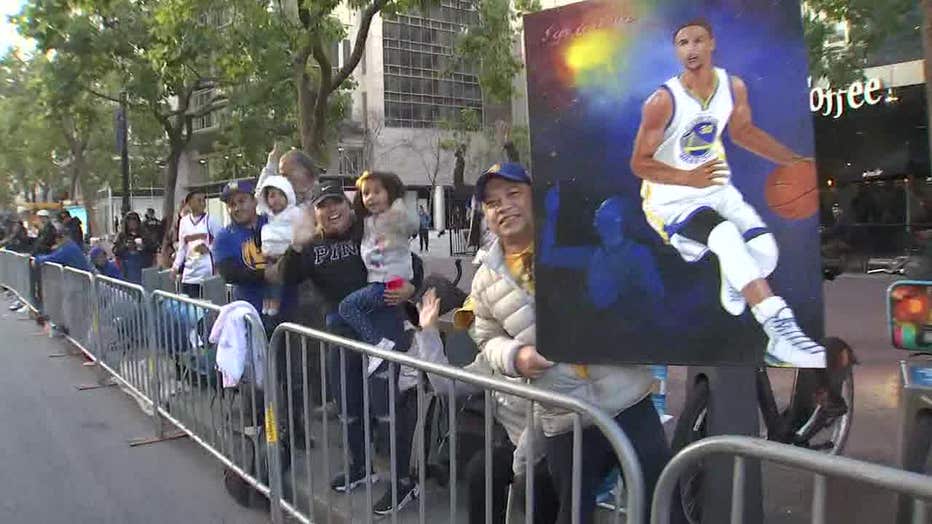 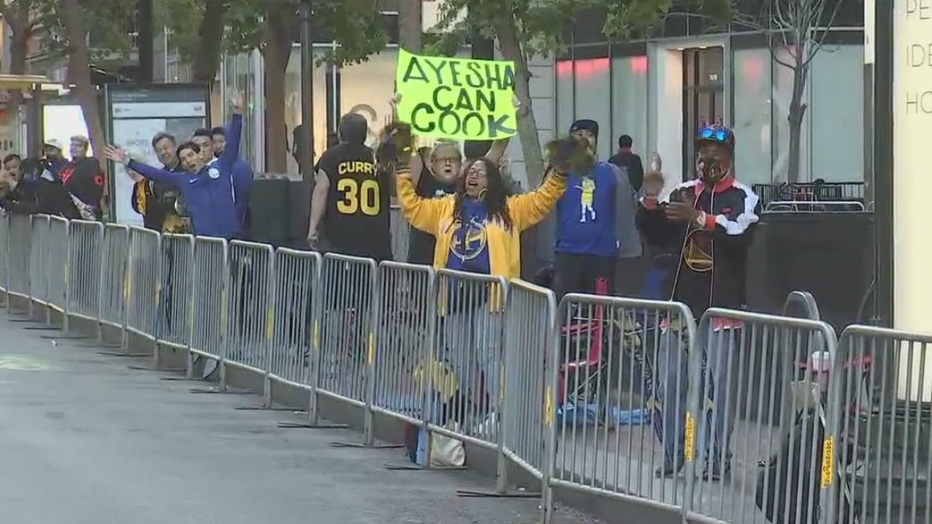 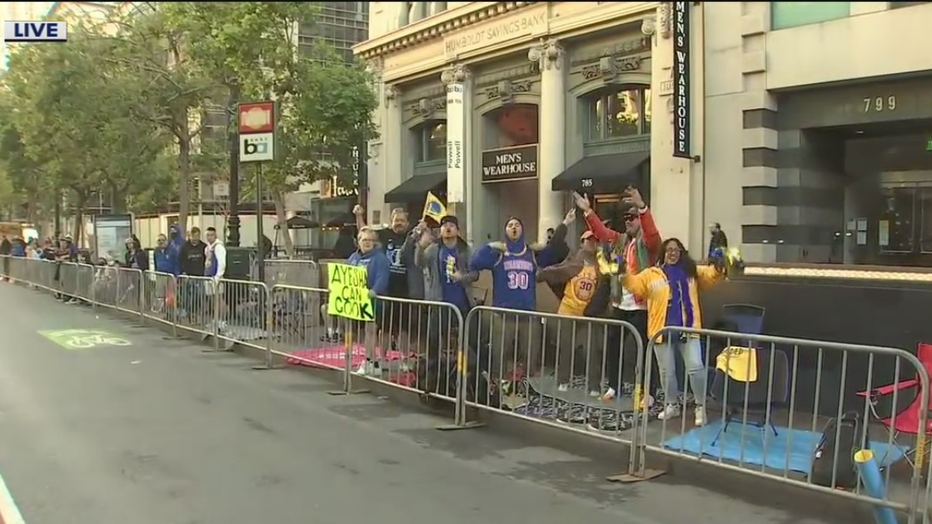