Saying he wanted “no gatherings of any kind," Murphy acknowledged the difficulty of enforcing such an order in every part of the state but said he wanted people to “stay home, period."

Murphy on Saturday ordered residents to stay home, banned all gatherings and told nonessential retail businesses to close in order to slow the spread of the coronavirus.

In other developments, authorities said four more people had died in New Jersey of the virus, bringing the total to 20. Almost 600 more positive test results were recorded, bringing the total to more than 1,900. Health officials issued an urgent call for blood donation and said steps were being taken to increase hospital capacity.

Meanwhile, a drive-thru coronavirus testing center in New Jersey once again reached capacity shortly after opening but was to reopen the next morning — and would be joined by another drive-thru center in another county, officials said.

A look at coronavirus-related developments in New Jersey on Sunday:

Murphy issued a sharp warning about people congregating in defiance of the stay-at-home order.

“We are really damned unhappy" about such stories, the governor said. “And we're going to take action." 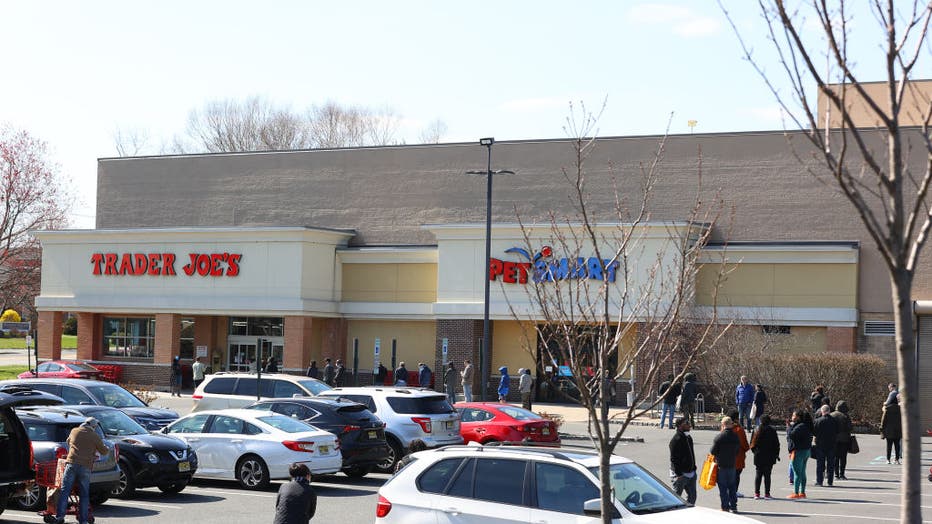 MILLBURN, NJ - MARCH 22: A general view of the line outside of Trader Joes as the store practices social distancing only lets a limited amount of people inside on Millburn Avenue on March 22, 2020 in Millburn, NJ. (Photo by Rich Graessle/Icon Sportsw

Murphy said the number of people allowed to gather together had gone “to zero."

“We basically have banned any social gatherings in the state," he said. While acknowledging the difficulty of enforcement, he said, “We want no gatherings of any kind. We want people to stay home, period.”

“There’s too many people not paying attention to this," the governor said, assuming anecdotal reports of people ignoring the order were correct. “We’ve about had it.”

New Jersey Gov. Phil Murphy ordered residents to stay home, banned all gatherings and told nonessential retail businesses to close by 9 p.m. Saturday in order to slow the spread of the coronovirus.

Officials said prosecutors would be on call dealing with violations of the executive order.

A drive-thru coronavirus testing center in New Jersey once again reached capacity Sunday morning shortly after opening, but the site will reopen Monday — and a second drive-thru center is also expected to open that day in another county.

Bergen County Executive Jim Tedesco said on his Facebook page that the site at Bergen Community College would reopen at 8 a.m. Monday. He said the county has the most cases in the state and has recorded five deaths, so “it is important that we test as many symptomatic residents as possible."

Tedesco urged people coming to the site, who must be New Jersey residents, to be patient. They will be screened for symptoms such as fever, shortness of breath and coughing.

On Monday, officials say a second drive-thru coronavirus testing site will open at the PNC Bank Arts Center in Holmdel in Monmouth County.

Health Commissioner Judy Persichilli told reporters during a briefing Sunday that there was a constant need for blood but the current need was becoming “increasingly urgent."

For the next 14 days, steps will include daily temperature taking of staff, inmates and detainees, the county said. Officials also said contact tracing would be done along with sanitizing of the entire complex.

The Associated Press receives support for health and science coverage from the Howard Hughes Medical Institute’s Department of Science Education. The AP is solely responsible for all content.