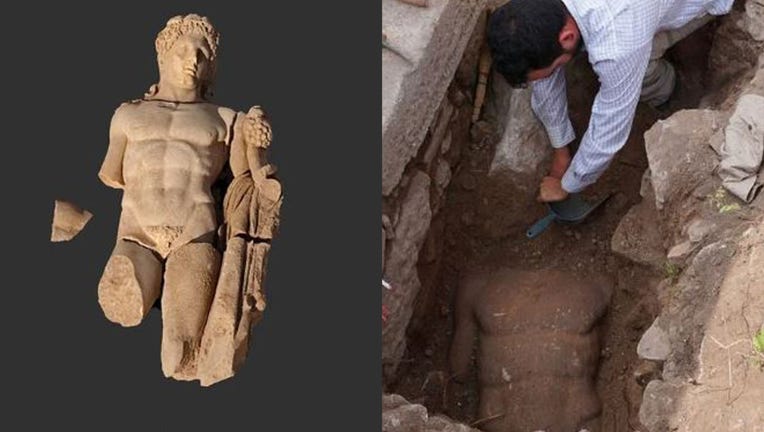 The Hercules statue and dig site are pictured in provided images. (Credit: Greek Ministry of Culture and Sports)

Archeologists recently unearthed a nearly 2,000-year-old statue depicting Hercules, one of the best-known heroes in ancient mythology, while working in northeastern Greece.

During an excavation on Sept. 16 in the ancient city of Philippi, "an impressive statue from Roman times" was uncovered from the Roman period, second century AD, depicting Hercules "with a youthful body," according to the country’s Ministry of Culture and Sports, which shared a statement about the discovery.

"The club, which has been found in fragments, and the lion hanging from the outstretched left hand attest to the identity of the hero," the statement said, according to an English translation. "On the earl's crest, he wears a wreath of vine leaves which is held at the back by a band whose ends end at the shoulders."

The archeologists from Aristotle University unearthed the statue while digging at an intersection of two main city streets. The excavation also uncovered an ornately-decorated structure, likely a fountain, the statement said.

"Baby Yingliang" is a well-preserved fossilized dinosaur egg that has given scientists another link between prehistoric creatures and modern birds. (Credit: Yingliang Stone Nature History Museum via Storyful)

While the team believes the Hercules statue dates back to the second century AD, the structure itself is believed to date back to the eighth or ninth century AD. The statement said statues often decorated buildings and public spaces during this period until the late Byzantine period.

"This find demonstrates the way public spaces were decorated in the important cities of the Byzantine Empire, including Philippi," the statement said.

The excavation site in Philippi, Greece. (Credit: Greek Ministry of Culture and Sports)

Hercules was the Roman name of Heracles from Greek mythology. Hercules was born a "strong and fearless" mortal to Zeus, ruler of all the Greek gods on Mount Olympus and all the mortals on earth, and Alcmene, the granddaughter of the hero Perseus, according to History.com.

"His life was not easy—he endured many trials and completed many daunting tasks—but the reward for his suffering was a promise that he would live forever among the gods at Mount Olympus," the website states.

The archeologist team will continue the excavation in Philippi next year, according to the statement. Philippi became a Unesco World Heritage Site in 2016.