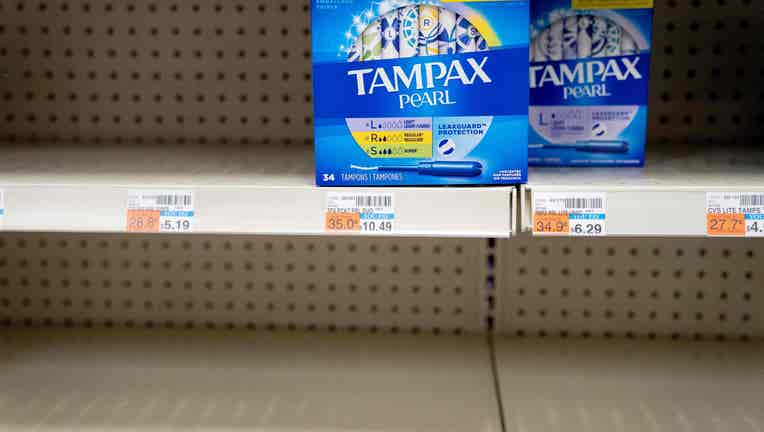 Two boxes of Tampax Pearl tampons are seen on a shelf at a store in Washington, DC, on June 14, 2022. - Tampons have reportedly been in short supply in stores across the United States due to global supply chain issues, according to US media. (Photo b

Consumers, already being pummeled by surging prices, now have to worry about product shortages.

In recent months, a handful of common products have become harder to find and more may be added to the list.

A spokesperson for Tampax, which is owned by P&G, told FOX Business in a statement that this is "a temporary situation, and the Tampax team is producing tampons 24/7 to meet the increased demand for our products."

The company says it's working with retail partners to maximize availability, which it says "has significantly increased over the last several months."

However, social media users have been taking notice.

"There a tampon shortage or something? I just went to five different Walgreens and the shelves are CLEARED," one Twitter user said.

Walgreens told the outlet it's working with its suppliers to ensure its stores have supplies available.

"However, similar to other retailers, we are experiencing some temporary brand-specific tampon shortages in certain geographies," the company said. "While we will continue to have products at shelf and online, it may only be in specific brands while we navigate the supply disruption."

NATIONAL SRIRACHA SAUCE SHORTAGE MAY LEAD TO SPICELESS SUMMER FOR SOME

CVS also said there have been "instances when suppliers haven’t been able to fulfill the full quantities of orders placed" in recent weeks, but that the company is working with "suppliers to ensure we have an ample supply of tampons in our stores."

The company added that if a store is temporarily out of specific products, it will "work to replenish those items as quickly as possible."

Retailers have been forced to put purchase limits on the products as shelves remain bare.

Abbott Nutrition's Sturgis, Michigan, factory, which exacerbated the industry-wide shortage, restarted production June 4. However, baby formula products from the plant won't return to store shelves until at least mid-July, according to the company's production timeline.

In May, President Joe Biden invoked the Defense Production Act to speed the production of infant formula and authorized flights to import supplies from overseas to help parents in desperate need.

In April, Huy Fong Foods, Inc., the nation’s leading sriracha sauce manufacturer, sent a letter to customers about an impending shortage, which would directly impact retailers and restaurants.

"Unfortunately, we can confirm that there is an unprecedented shortage of our products," Huy Fong Foods told Fox News Digital in an email.

"We are still endeavoring to resolve this issue that has [been] caused by several spiraling events, including unexpected crop failure from the spring chili harvest," the email continued. "We hope for a fruitful fall season and thank our customers for their patience and continued support during this difficult time."

According to Huy Fong Foods, the issues began in July 2020, when the company began experiencing a shortage of chili pepper inventory. The shortage worsened in recent months after poor weather conditions adversely affected chili crops this year.

According to Eat This, Not That, a glass bottle shortage is still ongoing.

Supply chain company Resilinc said that the "cost of glass bottles has risen by as much as 20%, driven mostly by shortages of raw materials needed to manufacture the glass."

Due to "raw material constraints, logistics issues and inflation, winemakers may be forced to pass down costs to consumers," the company added.

However, it will depend on the size of the operation.

"Larger winery operations with deeper pockets and longer lead time on orders aren’t feeling the impact as much," the company said. "Smaller wineries that have less purchasing power may be impacted differently. While they don’t want to necessarily pass along 100% of the incurred costs to consumers, they will likely have to raise prices along with taking a larger ding to profits."

According to Boxed CEO Chieh Huang, there may be more problems on the horizon.

"This summer, I think beverages, you're going to start to see kind of increased prices or shortages just because … already these factories are pumping it out at full capacity. You add in the increased demand of the summer, we don't know where that's going to go," Huang told "Varney & Co."  earlier this month.

FOX Business' Cortney Moore and the Associated Press contributed to this report.