Fort Myers Beach, Florida, has been decimated by Hurricane Ian.

Video shared by Bobby Pratt from the town on Estero Island in Lee County shows debris littered everywhere and buildings reduced to piles of rubble. Boats are slammed on shore, and a huge chunk of a pier is missing.

It’s one of several barrier islands in southwest Florida that were hit hardest by Ian’s wrath. Governor Ron DeSantis said Thursday that the electric grid for Lee and Charlotte counties will likely need to be rebuilt, and sheriffs in southwest Florida said 911 centers were inundated by thousands of stranded callers, some with life-threatening emergencies.

But Charlotte County Management Director Patrick Fuller expressed cautious optimism that worst-case scenarios might not have been realized.

No deaths or injuries had been confirmed, and no missing-persons reports had yet been made, he said.

On other barrier islands that bore the brunt of the winds and storm surge, flyovers showed that "the integrity of the homes is far better than we anticipated," Fuller said.

Still, rescue crews were trying to get access to those islands and other parts of the county "to determine the full status of all of our residents," Fuller said.

Sanibel Causeway was split and parts of it swept away into the Gulf. Boats ended up in between damaged homes and Matlacha along with Pine Island are also seeing devastating damage. Gov. DeSantis said parts of the electric grid may need be repaired.

The U.S. Coast Guard began rescue efforts hours before daybreak on barrier islands, DeSantis said. More than 800 members of federal urban search and rescue teams were also in the area. 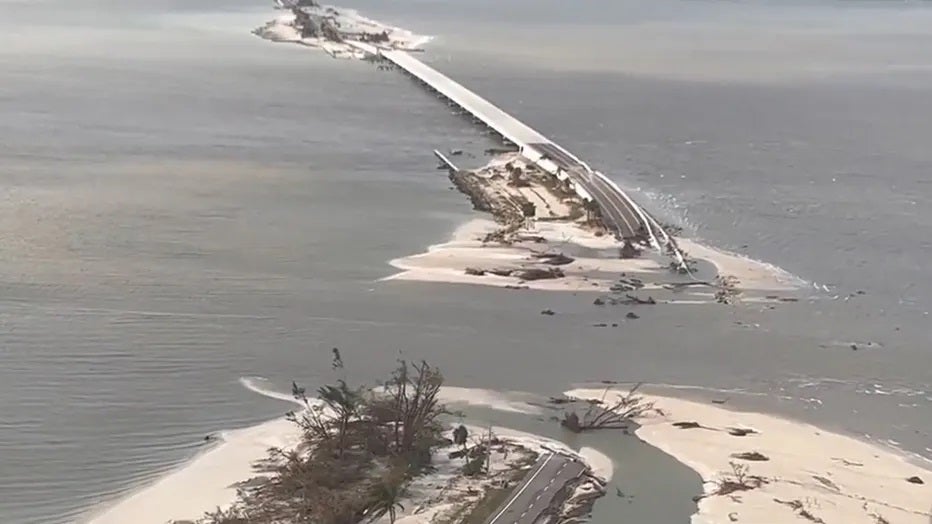 A chunk of the Sanibel Causeway fell into the sea, cutting off access to the barrier island where 6,300 people normally live. The bridge that connects Pine Island to the Florida’s mainland is also impassable, DeSantis said.

At least one person died in Florida - a 72-year-old man in Deltona who fell into a canal while using a hose to drain his pool in the heavy rain, the Volusia County Sheriff’s Office said. Two other storm deaths were reported in Cuba.

The Associated Press and FOX 13 Tampa contributed to this report.