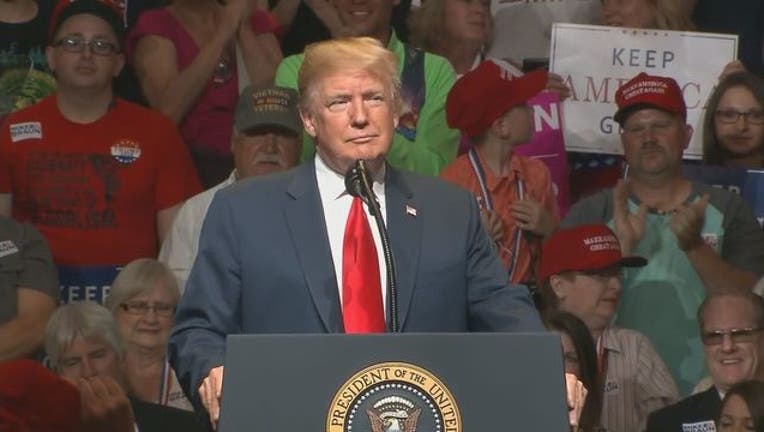 ELKHART, Ind. (AP) — Embracing his role as party leader, President Donald Trump issued a stern warning at a rally Thursday that Democrats would disrupt the economic progress of his administration, imploring Republicans to mobilize during the 2018 midterm elections.

Trump used one of his signature rallies in northern Indiana to paint a rosy picture of his presidency, pointing to low unemployment, "booming" job growth and optimism under his watch. Two days after Indiana wrapped up a divisive Republican Senate primary, the president praised a lengthy ticket of House and Senate candidates by name and predicted Democrats would dismantle his agenda if they regained control of Congress.

"You have to work every day between now and November to elect more Republicans so that we can continue to make America great again," Trump said, referencing his 2016 campaign slogan.

The president, who was joined at the Elkhart rally by home-state Vice President Mike Pence, said Democrats would raise taxes, "destroy your jobs" and "knock the hell out of your border."

Chief among his targets: Indiana's Democratic Sen. Joe Donnelly, who faces Republican businessman Mike Braun in what is expected to be one of the nation's most competitive Senate races.

Trump branded Donnelly as "Sleepin' Joe." He assailed him for opposing the president's signature tax cuts and his attempt to end the Affordable Care Act. And he criticized Donnelly for supporting the Iran nuclear deal forged by President Barack Obama and withdrawn from by Trump this week.

Trump said Donnelly would "do whatever Chuck Schumer and Nancy Pelosi tell him to do" and claimed the senator would "say one thing in Elkhart," and then support the "radical, liberal agenda."

After the rally, Donnelly said in a statement it was "okay" that Trump and Pence were "here today for politics, but problems only get solved when you roll up your sleeves and put in the hard work."

"I'm Indiana's hired help in the Senate because I don't work for any president or any political party — I work for Hoosiers, and that will never change," he said. Donnelly's campaign said he had voted with Trump 62 percent of the time.

Basking in the cheers of thousands of supporters wearing his red campaign hats, Trump hailed his decision to impose tariffs on steel and aluminum imports and his tough stance on trade deals, appealing to the region's manufacturing base. He reissued his campaign pledge to build a border wall with Mexico, telling the crowd the work had started despite opposition from Democrats.

And he celebrated the return of three Americans who had been held captive in North Korea, saying: "We welcomed them back home the proper way."

But for a onetime political novice who ran as an outsider, Trump played the role of party champion ahead of midterm elections that typically haunt the party that holds the White House.

Trump is expected to ramp up his political travel in the coming months, and his advisers viewed the event as a way to project party unity following a rough primary that pitted Braun, a former state legislator, against two Republican congressmen.

Imploring Braun to join him on stage, Trump turned the podium over to the Senate nominee, who credited the president for providing an inspiration to his candidacy. "I'm a businessman and an outsider, just like our president," Braun said to cheers.

The president, who helped raise $132 million for the Republican National Committee in 2016, won 10 states where Democratic senators are on the ballot this year. He's expected to campaign heavily to help Republicans maintain Senate and House majorities and elect GOP governors.

In his remarks, Trump painted a glowing picture of his presidency.

"We are all making America proud. We are rockin,'" he said. "The great news keeps rolling in."

Cohen appears to have used his relationship with Trump to earn hundreds of thousands of dollars — a practice at odds with Trump's "Drain the swamp" campaign message.

But Trump instead lobbed the "swamp person" charge at Donnelly, prompting the audience to break into a "Drain the swamp" chant.

He spoke last week to the National Rifle Association in Dallas. And last Saturday, Trump was in Ohio, long the key electoral piece for any GOP presidential hopeful.

As he travels the country, Trump will face the question of whether his appeal is transferable to down-ballot candidates, much in the way that Obama struggled to rally core Democrats when he wasn't running himself.

Obama suffered broad losses in Congress and in statehouses during the 2010 and 2014 midterm elections, an outcome Trump hopes to avoid.