Police firing tear gas after an Indonesian soccer match in an attempt to stop violence triggered a disastrous crush of fans that has left at least 125 people dead. 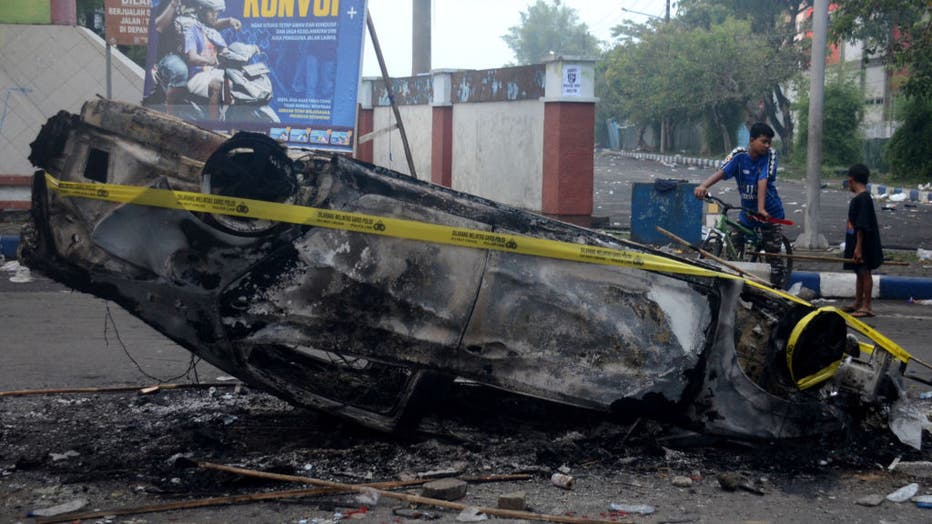 Hundreds of people ran to an exit gate in an effort to avoid the tear gas. Some suffocated in the chaos and others were trampled, killing 34 almost instantly.

More than 300 were rushed to nearby hospitals to treat injuries but many died on the way and during a treatment, Afinta said.

He said the death toll is likely still increasing, since many of about 180 injured victims’ conditions were deteriorating.

National Police Chief Listyo Sigit Prabowo said the death toll had been revised to 125 from 174, after authorities found some of the victims were counted twice. More than 100 were receiving intensive treatment in eight hospitals, 11 of them in critical condition.

"The stadium turned into a smoke-filled battleground when police fired tear gas," said Rizky, who came with his cousin to watch the game.

"I felt hot and stinging in my eyes, I couldn’t see clearly while my head was dizzy and everything went dark ... I passed out," he said. When he woke up, he was already in the emergency room. He said his cousin died because of head injuries.

"We wanted to entertain ourselves by watching a football match, but we got disaster," he said.

Indonesia’s soccer association, known as PSSI, suspended the premier soccer league Liga 1 indefinitely in light of the tragedy and banned Arema from hosting soccer matches for the remainder of the season.

Television reports showed police and rescuers evacuating the injured and carrying the dead to ambulances.

Grieving relatives waited for information about their loved ones at Malang's Saiful Anwar General Hospital. Others tried to identify the bodies laid at a morgue while medical workers put identification tag on the bodies of the victims.

"I deeply regret this tragedy and I hope this is the last soccer tragedy in this country, don’t let another human tragedy like this happen in the future," Widodo said in a televised speech. "We must continue to maintain sportsmanship, humanity and a sense of brotherhood of the Indonesian nation."

He ordered the youth and sports minister, the national police chief and the PSSI chair to conduct a thorough evaluation of the country’s soccer and its security procedure.

Youth and Sports Minister Zainudin Amali also expressed his regrets that "this tragedy happened when we were preparing for soccer game activities, both national and international level."

At the Vatican, Pope Francis said he was praying for "all those who have lost their live and were injured in the clashes that erupted after a soccer game in Malang, Indonesia."

Indonesia is due to host the 2023 FIFA U-20 World Cup from May 20 to June 11, with 24 participating teams. As the host, the country automatically qualifies for the cup.

In a statement, FIFA President Gianni Infantino expressed condolences on behalf of the global football community, saying "the football world is in a state of shock." The statement did not mention the use of tear gas.

Ferli Hidayat, local police chief of Malang, said there were some 42,000 spectators at the game Saturday, all of whom were Arema supporters because the organizer had banned Persebaya fans from entering the stadium in an effort to avoid brawls.

The restriction was imposed after clashes between supporters of the two rival teams in East Java's Blitar stadium in February 2020 caused 250 million rupiah ($18,000) in damage. Brawls were reported outside the stadium during and after the semifinals of the East Java Governor’s Cup, which ended with Persebaya beating Arema 4-2.

Rights groups responded to the tragedy by blaming the use of tear gas in the stadium by police.

Citing FIFA’s stadium safety guidelines against the use of "crowd control gas" by pitch side stewards or police, Amnesty International called on Indonesian authorities to conduct a swift, thorough and independent investigation into the use of tear gas at Kanjuruhan stadium.

"Those who are found to have committed violations are tried in open court and do not merely receive internal or administrative sanctions," said Usman Hamid, executive director of Amnesty International Indonesia.

He said tear gas should only be used to disperse crowds when widespread violence has occurred and when other methods have failed. People must be warned that tear gas will be used and allowed to disperse. "No one should lose their lives at a football match," Hamid said.

Despite Indonesia’s lack of international accolades in the sport, hooliganism is rife in the soccer-obsessed country where fanaticism often ends in violence, as in the 2018 death of a Persija Jakarta supporter who was killed by a mob of hardcore fans of rival club Persib Bandung in 2018.

Saturday's game is already among the world's worst crowd disasters, including the 1996 World Cup qualifier between Guatemala and Costa Rica in Guatemala City where over 80 died and over 100 more were injured. In April 2001, more than 40 people are crushed to death during a soccer match at Ellis Park in Johannesburg, South Africa.