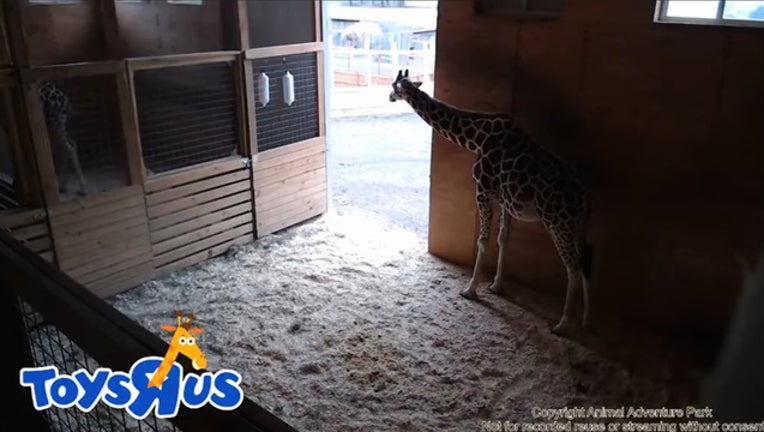 HARPURSVILLE, N.Y. (FOX 13) - As the internet continues to watch and wait for April the giraffe to give birth, her keepers are defending themselves against doubters.

“For any hoaxers or #Fakenews stories questioning April and the pregnancy - a quick biology lesson - animals do not develop milk unless supporting a pregnancy,” explained Wednesday morning’s post from Animal Adventure Park, which was accompanied by a photo.  “Furthermore - giraffes do not develop large udders like cattle etc, so to see this much development truly suggests calving in the near future.”

April and her mate, Oliver, have become international sensations ever since the New York park set up a round-the-clock live camera earlier this year.  But as days, weeks, and even months ticked by with no baby giraffe, some internet skeptics have been loudly wondering when – or even if – April would give birth.

The park continues to insist that we should see a giraffe calf before long.  The Wednesday morning Facebook post reminded everyone to be patient when it comes to Mother Nature.

“Remember, the Giraffe Cam was not set-up to capture an immediate birth - it was set-up to capture a process,” AAP’s Facebook post continued.  “Mind you, we did expect a calf sooner than this - but that is all part of the journey.”

April herself is doing fine, her keepers add.  She and Oliver both have been enjoying time outside of their pens now that warmer springtime weather has come to New York.

Meanwhile, as hoax and fake accounts have popped up to capitalize on April fever, the park continues to remind fans that the official live stream for the park is available at www.ApriltheGiraffe.com.

AAP has also established a text alert system to notify people when April goes into labor. Anyone interested in getting those alerts can sign up at www.ApriltheGiraffeAlert.com. The park has said it also plans to reveal the calf's gender by text alert.

Love April? Check out these stories about giraffes:

-Zookeeper describes the birth of a giraffe