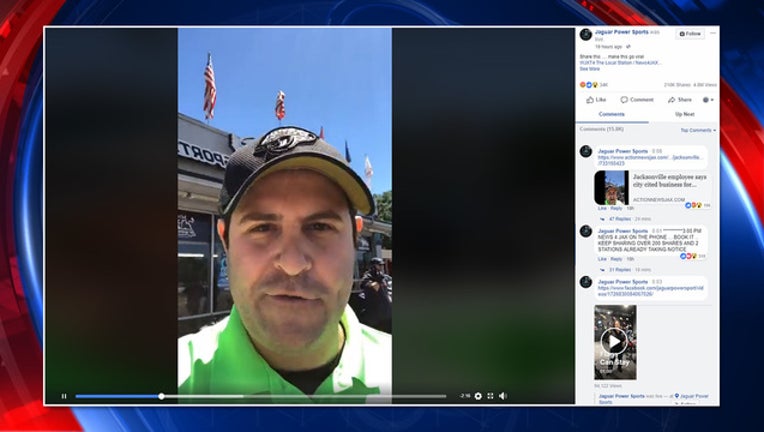 JACKSONVILLE (FOX 13) - The mayor of Jacksonville stepped in after a business owner’s Facebook video about military flags went viral.

In the video, the owner of Jaguar Power Sports explains that he was cited for flying the flags of military service branches.  According to FOX 30 News in Jacksonville, the city worker told one of his customers, a veteran, his service “didn’t matter.” The veteran spoke to FOX 30 about the encounter, but wanted to remain anonymous.

“She turned around at the door and said to me, in a very loud voice that, what I did for this country did not matter,” he told FOX 30.  “I was mad. I don’t take a lot of things personal. I really don’t, but that strikes a chord with me.”

Surveillance video appeared to show the city worker wag her finger toward the veteran before the alleged comment. The veteran told FOX 30 he was shot three times while serving overseas.

The business owner soon posted a Facebook video of himself Monday afternoon describing the encounter with his customer and said the city of Jacksonville cited him for each military flag atop the building. The video went viral. Jaguar Power Sports said a U.S. soldier in Germany called the business to offer his support to the veteran.

By Monday evening, Jacksonville Mayor Lenny Curry tweeted, "let them fly," and promised the city will review employee procedures, FOX 30 reported. Curry also shared on Twitter that city staff has been informed to treat military flags the same as the U.S. flag.

"We support our military and veterans," he wrote, "and we appreciate the businesses who honor their service."

“There’s a lot of people on this Earth who aren’t walking here anymore because they gave their life for this country,” he said.