GREENBELT, Md. - The first full round of galactic beauty shots from NASA’s new James Webb Space Telescope were unveiled on Tuesday, including a foamy blue and orange shot of a dying star and parts of the universe seen in a new light.

NASA shared four more images from the $10-billion telescope’s initial outward gazes, including two images of nebulas where stars are born and die in spectacular beauty and another shot showing an update of a classic image of five tightly clustered galaxies that dance around each other. The first image, offering the farthest humanity has ever seen in both time and distance, was unveiled Monday.

With one exception, the latest images on Tuesday showed parts of the universe seen by other telescopes. But Webb’s sheer power, distant location off Earth, and use of the infrared light spectrum showed them in a new light.

"Every image is a new discovery and each will give humanity a view of the universe that we’ve never seen before,’’ NASA Administrator Bill Nelson said Tuesday, rhapsodizing over images showing "the formation of stars, devouring black holes."

Webb's use of the infrared light spectrum allows the telescope to see through the cosmic dust and "see light from faraway light from the corners of the universe," he said.

The European and Canadian space agencies joined NASA in building the powerful telescope.

"For everyone on Earth, this is your telescope," NASA said in its broadcast on Tuesday, which shared live videos of groups watching the event in India, Italy, Israel, and other countries around the world. "Today actually does mark the dawn of a new era... this is just the beginning."

The Southern Ring Nebula, which is sometimes called "eight-burst" was pictured in one of the images released. About 2,500 light-years away, it shows an expanding cloud of gas surrounding a dying star. A light-year is 5.8 trillion miles. 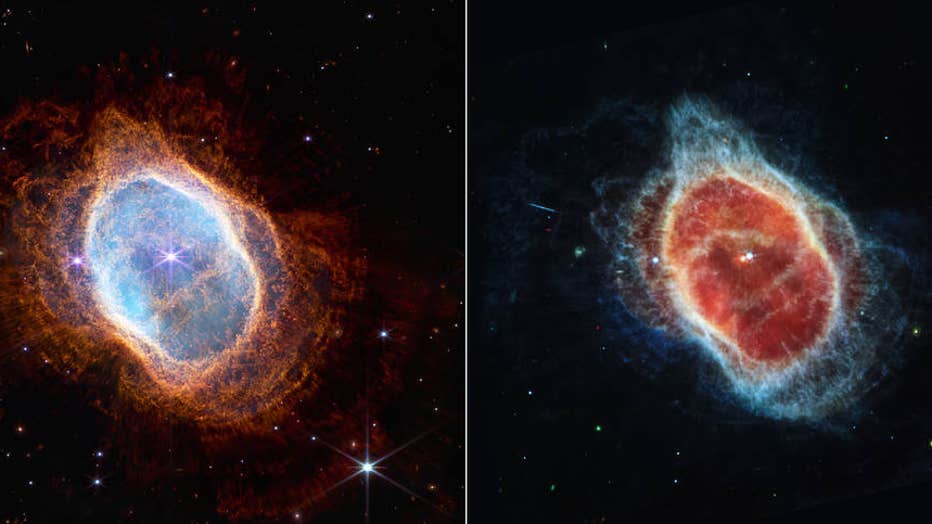 NASA’s James Webb Space Telescope has revealed details of the Southern Ring planetary nebula that were previously hidden from astronomers. Planetary nebulae are the shells of gas and dust ejected from dying stars. Image credit: NASA, ESA, CSA, and ST

Another image showed Carina Nebula, one of the bright stellar nurseries in the sky, about 7,600 light-years away. 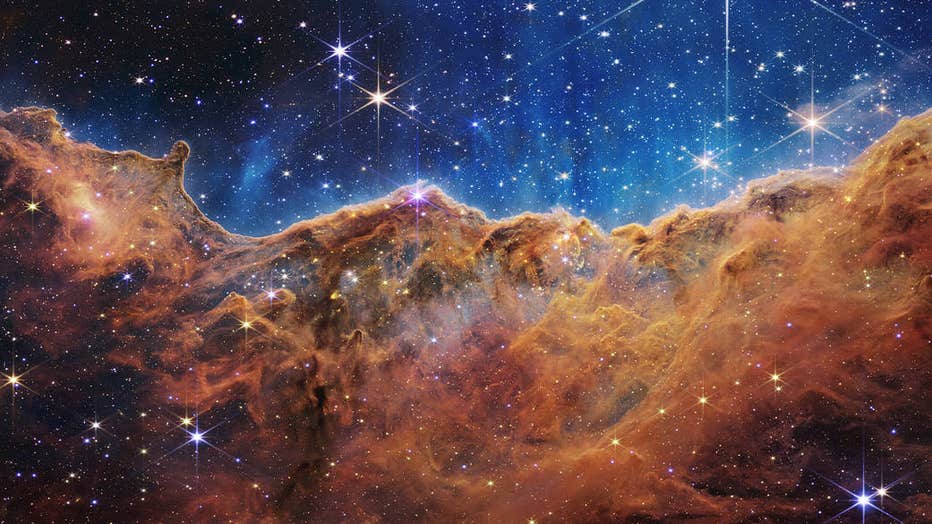 A third image revealed never-before-seen details of five galaxies in a cosmic dance, some 290 million light-years away. "Stephan’s Quintet" was first seen 225 years ago in the constellation Pegasus. 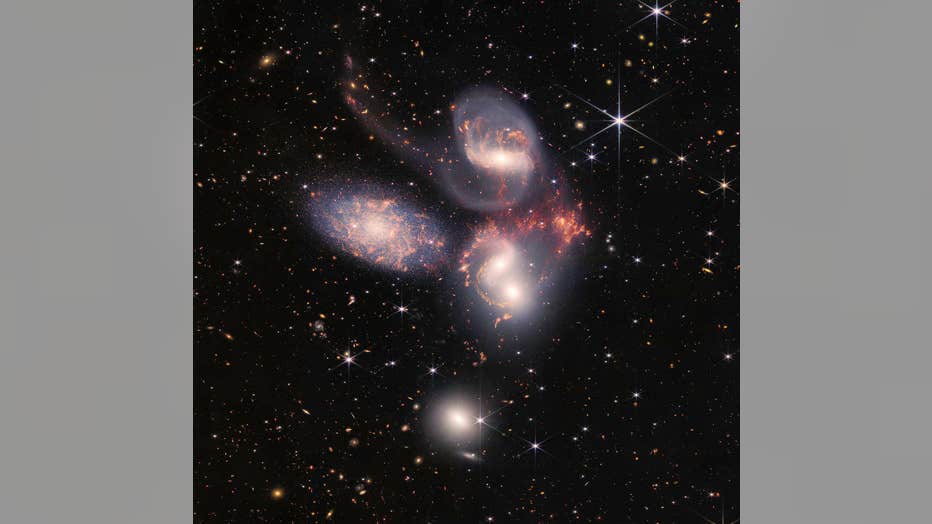 The fourth image is about a blueish giant planet called WASP-96b. The telescope captured the distinct signature of water, along with evidence of clouds and haze, in the atmosphere surrounding a hot, puffy gas giant planet orbiting a distant Sun-like star.

"The observation, which reveals the presence of specific gas molecules based on tiny decreases in the brightness of precise colors of light, is the most detailed of its kind to date, demonstrating Webb’s unprecedented ability to analyze atmospheres hundreds of light-years away," NASA said. 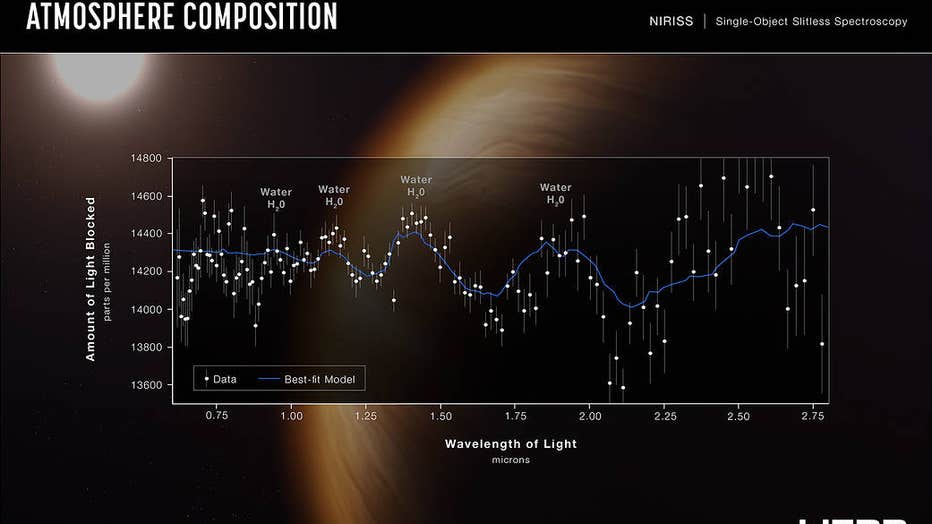 NASA’s James Webb Space Telescope has captured the distinct signature of water, along with evidence for clouds and haze, in the atmosphere surrounding a hot, puffy gas giant planet orbiting a distant Sun-like star. The observation, which reveals the

The first "deep field" image, released during a brief White House event, is filled with lots of stars, with massive galaxies in the foreground and faint and extremely distant galaxies peeking through here and there. Part of the image is light from not too long after the Big Bang, which was 13.8 billion years ago.

It's the first to utilize Deep Field abilities and contains a cluster of galaxies known as SMACS 0723. 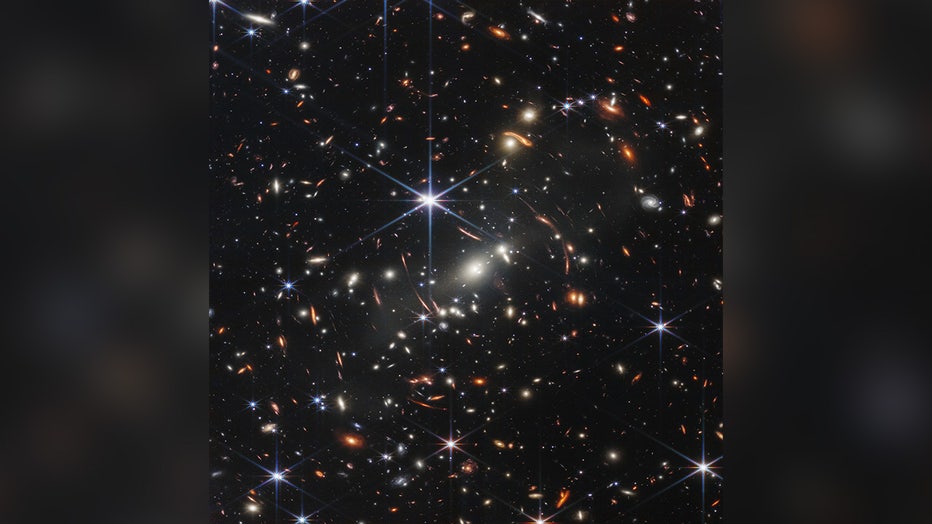 NASA’s James Webb Space Telescope has produced the deepest and sharpest infrared image of the distant universe to date. Known as Webb’s First Deep Field, this image of galaxy cluster SMACS 0723 is overflowing with detail. This image is among the tele (NASA, ESA, CSA, and STScI)

President Joe Biden marveled at the image that he said showed "the oldest documented light in the history of the universe from over 13 billion — let me say that again — 13 billion years ago. It’s hard to fathom."

The busy image with hundreds of specks, streaks, spirals and swirls of white, yellow, orange and red is only "one little speck of the universe," NASA Administrator Bill Nelson said.

"What we saw today is the early universe," Harvard astronomer Dimitar Sasselov told the Associated Press after the Monday reveal.

Sasselov said he and his colleague Charles Alcock first thought "we’ve seen this before." Then they looked closer at the image and pronounced the result not only beautiful but "worth all that waiting" for the much-delayed project.

What is the James Webb Space Telescope?

The world’s biggest and most powerful space telescope rocketed away last December from French Guiana in South America. In January, it reached its lookout point of 1 million miles from Earth.

That’s when the lengthy process began to align the mirrors, get the infrared detectors cold enough to operate, and calibrate the science instruments — all protected by a sunshade the size of a tennis court that keeps the telescope cool.

The plan is to use the telescope to peer back so far that scientists will get a glimpse of the early days of the universe about 13.7 billion years ago and zoom in on closer cosmic objects, even our own solar system, with a sharper focus.

The Hubble Space Telescope was launched into orbit by space shuttle Discovery in 1990, helping scientists to better understand how planets and galaxies form with its own awe-inspiring images.

Specifically, Webb is designed to peer deeper into space to see the earliest stars and galaxies that formed in the universe and to look deep into nearby dust clouds to study the formation of stars and planets, NASA says. To do this, Webb has a much larger primary mirror than Hubble — 2.7 times larger in diameter — which gives it more light-gathering power.

Hubble has stared as far back as 13.4 billion years, disclosing a clumpy runt of a galaxy that is currently the oldest and farthest object ever observed. Astronomers are eager to close the 300 million-year gap with Webb and draw ever closer in time to the Big Bang, the moment the universe formed 13.8 billion years ago.

How far back past 13 billion years did that first image look? NASA didn't provide any estimate on Monday. Outside scientists said those calculations will take time, but they are fairly certain somewhere in the busy image is a galaxy older than humanity has ever seen, probably back to 500 million or 600 million years after the Big Bang.

"It takes a little bit of time to dig out those galaxies," University of California, Santa Cruz, astrophysicist Garth Illingworth said. "It's the things you almost can't see here, the tiniest little red dots."

"This is absolutely spectacular, absolutely amazing," he added. "This is everything we’ve dreamed of in a telescope like this."

The deepest view of the cosmos "is not a record that will stand for very long," project scientist Klaus Pontoppidan said during the briefing, since scientists are expected to use the Webb telescope to go even deeper.