Jan. 6 hearing: Trump didn’t want to say ‘election is over’ | LiveNOW from FOX

The House Jan. 6 committee has aired a previously unseen video outtake of President Donald Trump saying, "I don’t want to say the election is over" the day after insurrection at the U.S. Capitol. The committee showed outtakes from a speech that Trump recorded on Jan. 7, 2021, in which he resisted the idea of saying that the election is over.

WASHINGTON - The House committee investigating the Jan. 6 attack on the U.S. Capitol has scheduled its next hearing for Oct. 13, pushing the investigation back into the limelight less than three weeks before the midterm election that will determine control of Congress.

It will be the panel’s first public session since the summer, when lawmakers worked through a series of tightly scripted hearings that attracted millions of viewers and touched on nearly every aspect of the Capitol insurrection.

The committee had planned to hold the hearing in late September, but postponed as Hurricane Ian made landfall in Florida.

The panel — comprised of seven Democrats and two Republicans — has not yet provided an agenda, but Rep. Adam Schiff, D-Calif., said recently that the hearing would "tell the story about a key element of Donald Trump’s plot to overturn the election."

Democratic Rep. Bennie Thompson, the committee's chairman, told reporters last week that the hearing would touch on recent revelations about Save America PAC, Trump's chief fundraising vehicle. It is facing legal scrutiny after the Justice Department issued a round of grand jury subpoenas that sought information about the political action committee’s fundraising practices. 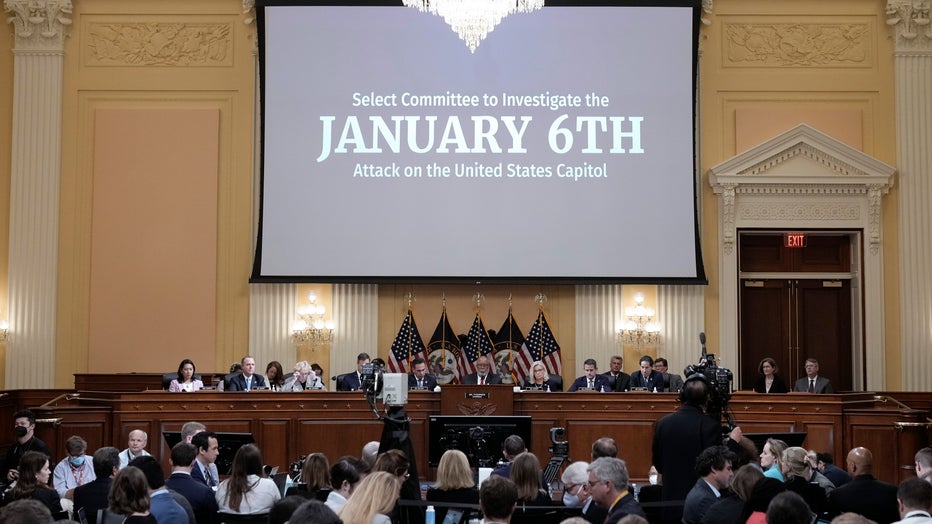 The Select Committee to Investigate the January 6th Attack on the U.S. Capitol holds a hearing on June 16, 2022 in Washington, DC.(Photo by Drew Angerer/Getty Images)

The hearing is also expected to include never-before-seen interview footage of witnesses the committee has deposed since late July. That could include Virginia "Ginni" Thomas, the wife of Supreme Court Justice Clarence Thomas, who was interviewed last week behind closed doors. The committee probed Thomas about her role in trying to help Trump overturn his election defeat, including her correspondence with White House chief of staff Mark Meadows and lawmakers in Arizona and Wisconsin in the weeks after the 2020 presidential election.

Throughout its initial eight hearings, the committee has sought to show the American public in expansive detail how Trump ignored many of his closest advisers to pursue false claims of election fraud after he lost the election to Democrat Joe Biden, then failed to act when his rhetoric spurred a mob assault on the Capitol.

Some of the more than 1,000 witnesses interviewed by the panel — a number of them Trump’s closest allies — recounted in videotaped testimony how the former president sat idly when hundreds of his supporters violently attacked the Capitol as Congress certified Biden’s victory on Jan. 6, 2021.

The committee is aiming to wrap up its work by the end of the year and issue a final report and legislative recommendations, but their investigative work is not yet complete as lawmakers explore several unanswered questions.

Man charged in Jan. 6 insurrection apologizes to officers after hearing

Stephen Ayres testified that he felt called by former President Donald Trump to come to Washington on Jan. 6, 2021. Following his testimony on Tuesday, Ayres went to several of the officers who were present during the insurrection at the hearing and apologized and even embraced a few.

Panel members still want to get to the bottom of missing Secret Service texts from Jan. 5-6, 2021, which could shed further light on Trump’s actions during the insurrection, particularly after earlier testimony about his confrontation with security as he tried to join supporters at the Capitol. Thompson said earlier this month that the committee has recently obtained "thousands" of documents from the Secret Service.

Congressional investigators have also been interviewing several of Trump’s former Cabinet members, some of whom had discussed invoking the Constitution's 25th Amendment to remove Trump from office in the aftermath of the insurrection.

Another decision for the committee is how aggressively to pursue testimony from Trump and former Vice President Mike Pence. Some members have downplayed the value of taking that step and time is running short to request their testimony.

The panel will have to wrap up the loose ends by the end of the year when the select committee status expires.

If Republicans take the majority in November’s elections, they are expected to dissolve the committee in January. The panel plans to issue a final report by the end of December that will include legislative reforms it says would help prevent future attempts to subvert democracy.