The Jan. 6 committee on June 13, 2022, shared a video of witnesses discussing 2020 election night when FOX News called that President Joe Biden won Arizona – a moment that prompted "anger and disappointment" in Trump’s inner sanctum at the White House.

WASHINGTON - The House committee investigating the Jan. 6, 2021 riot at the U.S. Capitol has postponed a hearing for later this week that was to feature dramatic testimony from former Justice Department officials who threatened to resign over then-President Donald Trump's pursuit of false election fraud theories.

The hearing had been set for Wednesday, but the committee on Tuesday morning said that it had been postponed. It did not give a reason or a new date for the hearing.

Rep. Zoe Lofgren, a member of the committee, described the postponement as "no big deal" during an appearance on MSNBC's "Morning Joe" and said it was the result of "technical work" that still needed to be done.

"Putting together the video exhibits is an exhausting exercise for our very small video staff," said Lofgren, a California Democrat. "We were going to have one-two-three in one week and it’s just it’s too much to put it all together. So we’re trying to give them a little room to do their technical work."

The next hearing is set to take place on Thursday. 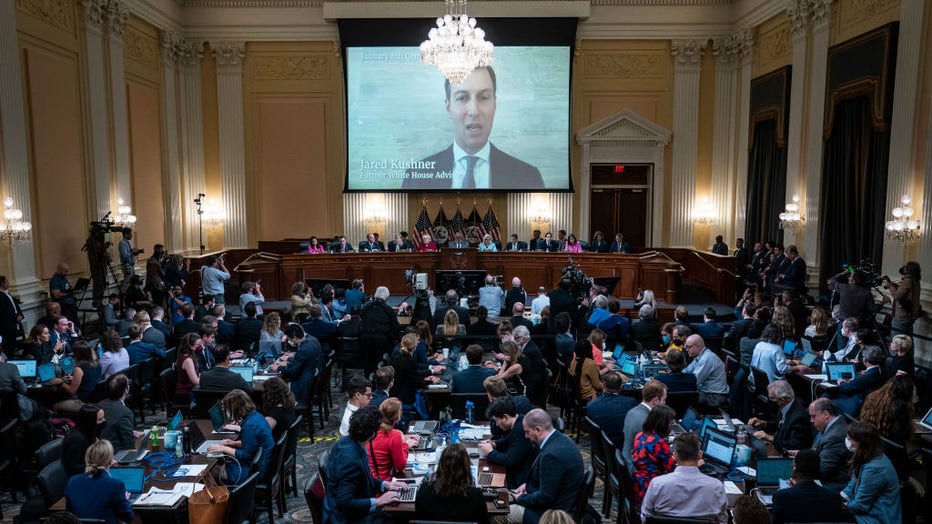 A video of former White House Senior Advisor Jared Kushner speaking is shown on a screen as the House select committee tasked with investigating the January 6th attack on the Capitol hold a hearing on Capitol Hill on Monday, June 13, 2022, in Washing

The witnesses at Wednesday's hearing were to include Jeffrey Rosen, who was the acting attorney general at the time of the Capitol insurrection, as well as two other former top officials at the Justice Department, Richard Donoghue and Steven Engel. Lawyers for all three men did not immediately return messages seeking comment.

Though the lawyers' accounts have been documented by the news media, the hearing — whenever it occurs — will give the American public the most detailed glimpse to date about a near-revolt inside the Justice Department, which historically prides itself on independence from the White House, and to threatened resignations from the senior-level officials.

The witnesses are expected to testify about how Trump sought to bend the Justice Department to his political will during the final days of the administration, urging officials to declare the election as corrupt and to aid in his efforts to challenge the results of the race won by Democrat Joe Biden.

Rosen took over the department following the December 2020 departure of William Barr, who angered Trump by saying the department had not found fraud that could have affected the results of the election. Trump quickly soured on Rosen, too, after the then-acting attorney general rejected entreaties from the president and the White House to challenge the election results.

The president was introduced by Rep. Scott Perry, a Pennsylvania Republican and ardent Trump backer, to Jeffrey Clark, a little-known assistant attorney general who postured himself as willing to advance Trump's baseless voting fraud claims.

A timeline of what transpired during the deadly Capitol riot on Jan. 6.

At one point, according to testimony provided to lawmakers, Clark presented colleagues with a draft letter pushing Georgia officials to convene a special legislative session on the election results. Clark wanted the letter sent, but superiors at the Justice Department refused.

A lawyer for Clark did not immediately return a phone message on Wednesday.

The situation came to a head during a tense, hours-long Jan. 3, 2021 meeting at the White House in which Engel and Donoghue told Trump that they would resign from the Justice Department if Trump proceeded with his plan to fire Rosen and replace him with Clark. Trump ultimately relented.