Video from Joel Franco shows storm chasers and weather reporters on the street in Punta Gorda as "the full fury" of Hurricane Ian arrives.

The Weather Channel reporter is known for his live reports from the scene of some of the worst weather in the U.S. And Wednesday, southwest Florida certainly qualified. Hurricane Ian roared ashore in Coya Costa with winds of 150 mph just after 3 p.m.

Moments later, Cantore was doing a report from Punta Gorda, about 20 miles away across Charlotte Harbor. Video shared by Joel Franco showed several storm chasers and weather reporters at the scene, and at one point, a quick-moving tree branch flew through and tripped up Cantore.

"You know what, I think I’m just going to come in here for a second," Cantore said on the Weather Channel stream as he struggled to grab a street sign. "Just give me a second. I’m fine." 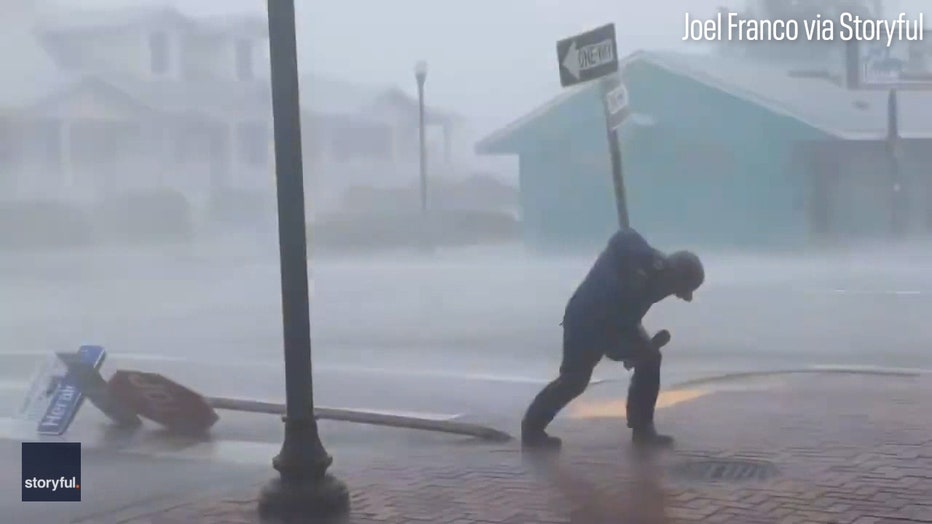 The Weather Channel's Jim Cantore fights to regain his footing amid the wind.

According to the broadcast, winds at that location were gusting to 110 mph. Franco’s footage showed other branches continuing to blow through the intersection, along with at least one street sign that had been knocked down by the wind.

"You just can’t stand up," Cantore puffed, tossing back to the studio.

Local emergency managers had already told residents to evacuate from the Punta Gorda area, which also took a direct hit from Hurricane Charley back in 2004.

Unlike Charley, Hurricane Ian was a much larger storm, just shy of a Category 5 – the most powerful classification for storms. Destructive storm surge flooding had already inundated Naples and other nearby coastal communities, and parts of Central Florida were expecting up to 2 feet of rain as the storm moved across the state.

RELATED: Hurricane Ian may be among top 5 most powerful hurricanes to make US landfall

This story was reported from Orlando, Fla.