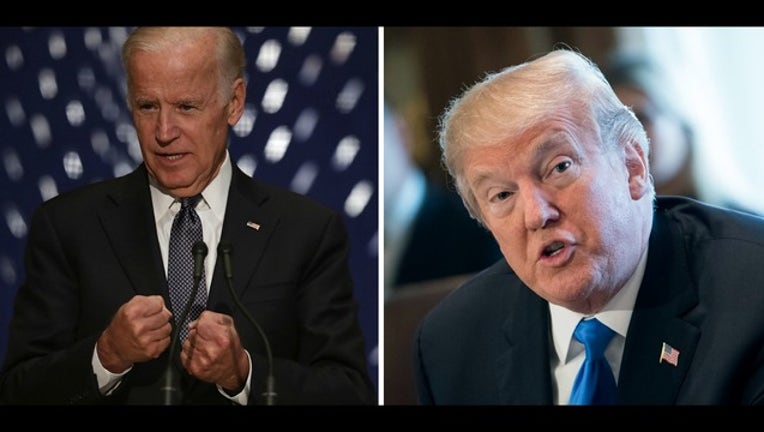 Biden: "If we were in high school, I’d take him [Trump] behind the gym and beat the hell out of him." Getty Images.

OAKLAND, Calif. (KTVU) - While speaking about sexual assault at the University of Miami on Tuesday, former Vice President Joe Biden responded to President Trump’s unseemly comments about women by stating he would “beat the hell out of” him if they were in high school.

“When a guy who ended up becoming our national leader said, ‘I can grab a woman anywhere and she likes it,’ and then said, ‘I made a mistake,” Biden said, referencing the 2005 recording of Trump bragging about sexual assault, according to video posted on Facebook by the University of Miami College Democrats.

“They asked me would I like to debate this gentleman, and I said no. I said, ‘If we were in high school, I’d take him behind the gym and beat the hell out of him,’” said Biden. The crowd responded with laughter and applause.

The 2005 recording Biden references was the “Access Hollywood” video that surfaced in 2016. The tape revealed Trump making vulgar comments about women. Trump apologized, labeling his comments as “locker room talk.”

Biden responded to this brand of conversation.

“I’ve been in a lot of locker rooms my whole life. I’m a pretty damn good athlete,” the 47th vice president said. “Any guy that talked that way was usually the fattest, ugliest S.O.B in the room.”

Biden was speaking at a rally put on by the “It’s on us” advocacy group, who works to “create an environment in which sexual assault is unacceptable and survivors are supported.”

In February, Biden broached the possibility of running for president in 2020 during a gathering with longtime foreign policy aides. He said that no decision was made and that it didn’t need to be made yet. Nevertheless, if Biden does choose to chase the democratic nomination, he and Trump could potentially go head-to-head during the next run for president.