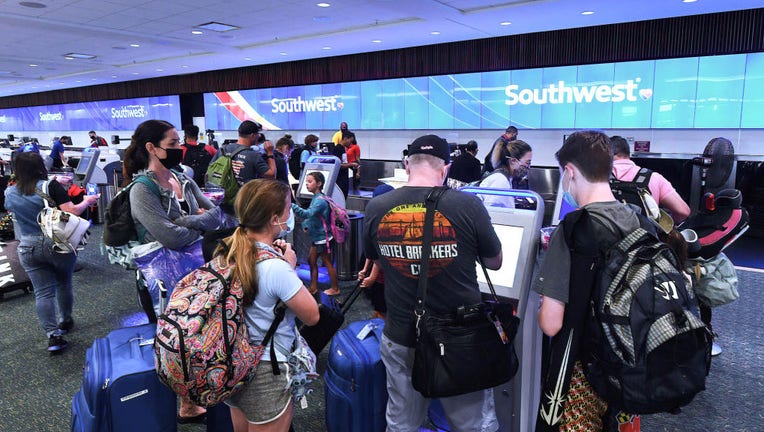 Travelers check in for a Southwest Airlines flight at Orlando International Airport ahead of the Fourth of July holiday. (Paul Hennessy/SOPA Images/LightRocket via Getty Images)

WASHINGTON - Since the Fourth of July falls on a Monday, it becomes a three-day weekend for many. With more than 47 million people hitting the road for some R&R for Independence Day, AAA expects 3.5 million people to fly to their vacation getaways.

Air travel remains a go-to mode of transportation and AAA explains in its 2022 Independence Day travel forecast that flying to your destination will be pricey given the going rate even for cheap tickets, which on average this year is $201 per ticket.

"The volume of travelers we expect to see over Independence Day is a definite sign that summer travel is kicking into high gear," Paula Twidale, senior vice president, AAA Travel said in a statement. "Earlier this year, we started seeing the demand for travel increase and it’s not tapering off. People are ready for a break and despite things costing more, they are finding ways to still take that much needed vacation."

RELATED: Flight attendant bluntly shares travel tips: ‘We will not help you if you are mean’

Air travelers not only face the burden of expensive flight costs but also delays and cancellations reported nationwide for weeks leading up to the Fourth of July Weekend.

Flight Aware, a company that provides flight tracking data, reported Tuesday that over 17,000 flights have been delayed with more than 2,000 flights canceled in the United States.

On Monday, the digital aviation company shared similar stats for flight delays and cancellations. The total delays within, into, or out of the United States for that day was nearly 1000 with 700 U.S. flights and more than 2,300 flights, including international flights, FOX Business reported.

Over the weekend, Flight Aware tracked nearly 7,000 flight delays within, into, or out of the U.S., plus 867 cancellations within the nation on Sunday.

Last week, more than 600 U.S. flights were canceled with over 4,200 delayed on June 24. That was better than June 23, however, when thunderstorms on the East Coast contributed to more than 800 cancellations and 6,600 delays, according to Flight Aware.

Airports with the most cancellations recently include Charlotte, North Carolina, a major hub for American Airlines, LaGuardia and Newark Liberty in the New York City area, and Reagan Washington National outside Washington, D.C.

Best and worst times to travel

Conventional wisdom suggests that getting to the airport early to catch your flight is the safest bet, but sometimes it can come down to a specific day and time you leave.

AAA’s holiday travel advisory offers some of the best days and times to travel courtesy of INRIX.

Here are the best times to travel for the holiday weekend:

These are considered the worst times to leave:

Airlines for America, which represents the largest U.S. carriers, said last week it wants to know FAA's staffing plans for the July Fourth holiday weekend, "so we can plan accordingly."

The comments from the industry group could serve as a pre-emptive defense in case airlines again suffer thousands of canceled and delayed flights over the holiday weekend, when travel is expected to set new pandemic-era highs.

Nicholas Calio, the CEO for Airlines for America, wrote in a June 24 letter stating that airlines have dropped 15% of the flights they originally planned for June through August to make the remaining flights more reliable, they are hiring and training more pilots and customer-service agents, and giving passengers more flexibility to change travel plans.

Thunderstorms can impact air traffic during the summer, but airlines have also acknowledged staffing shortages — they are hiring at a rapid pace to replace tens of thousands of workers whom the airlines paid to quit when travel collapsed in 2020.

Pilot union leaders say their groups are being stretched to the limit, and more pilots report being fatigued.  The FAA has admitted that it too is understaffed, particularly at a key air traffic control center in Florida.

Delta Air Lines, which canceled the most flights over the Memorial Day stretch, said last week that it has reduced cancellations by hiring more pilots and flight attendants and by scheduling crews to adjust more quickly to disruptions such as thunderstorms.

Dallas-based Southwest Airlines has been hiring pilots since last year to replace those who took buyouts that the airline offered in 2020, when the pandemic caused air travel to plummet. The union says pilots are not being fairly compensated for handling extra flights, and that Southwest uses outdated crew-scheduling technology that makes it hard for the airline to recover from even minor hiccups.

Southwest, the nation's fourth-biggest airline, suffered through high cancellation rates last summer and again in early October, when weather-related cancellations in Florida cascaded into a dayslong, nationwide meltdown. It has performed better more recently, including over the Memorial Day weekend.

Allegiant Air, a discount carrier that caters to vacationers, told the Associated Press that bookings for trips after the summer are running above this time in 2019. The Las Vegas-based airline said that as coronavirus cases began rising in mid-May, it canceled more flights because of absent crew members.

FOX 5 Atlanta, FOX Business, and the Associated Press contributed to this story.