Vice President Kamala Harris cited deadly floods that have swept through Kentucky and Missouri, "washing away entire neighborhoods,'' leaving at least 35 dead, including children. At least two people were killed in a wildfire in Northern California that was among several fires menacing thousands of homes in the western U.S. Hot and gusty weather and lightning storms threatened to boost the danger that the fires will keep growing, "The devastation is real. The harm is real. The impact is real,'' Harris said. "And we are witnessing it in real time.''

WASHINGTON - Vice President Kamala Harris called climate change an "immediate" and "urgent" crisis Monday as she detailed more than $1 billion in federal spending to respond to disasters such as deadly flooding in Kentucky and wildfires ravaging her home state of California.

On a visit to Miami, Harris announced a series of grants being made available to states to help communities across the nation prepare for and respond to climate-related disasters.

Touring the National Hurricane Center before the grant announcement, Harris said disasters such as the Kentucky floods and California wildfires show "how immediate, how current and how urgent'' it is to address extreme weather being experienced in the United States and around the world. 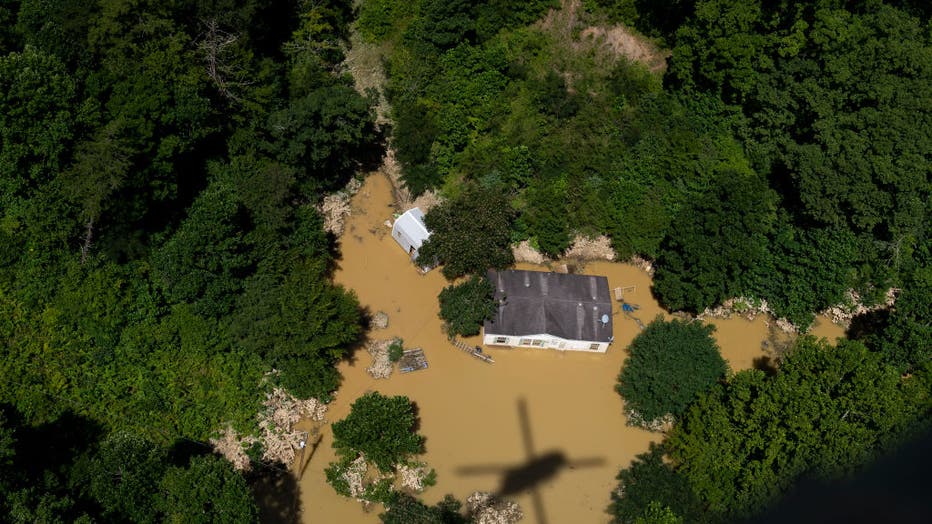 In this aerial view, floodwater surrounds a house as the Kentucky National Guard flies a recon and rescue mission on July 30, 2022, in Breathitt County near Jackson, Kentucky. (Photo by Michael Swensen/Getty Images)

"Climate change has become a climate crisis, and a threat has now become a reality,'' she said in a speech at Florida International University.

Harris cited deadly floods that have swept through Kentucky and Missouri, "washing away entire neighborhoods,'' leaving at least 35 dead, including children. At least two people were killed in a wildfire in Northern California that was among several fires menacing thousands of homes in the western U.S. Hot and gusty weather and lightning storms threatened to boost the danger that the fires will keep growing,

At least 28 dead in Eastern Kentucky Flooding | LiveNOW from FOX

Kentucky Gov. Andrew Beshear gives update on the devastating flooding. The number of missing and unaccounted for residents is unknown due to cell phone service outages and massive ongoing search efforts.

"The devastation is real. The harm is real. The impact is real,'' Harris said. "And we are witnessing it in real time.''

In 2021, the United States experienced 20 climate-related disasters that each caused over $1 billion in damage, Harris said, citing a report by the National Oceanic and Atmospheric Administration. There were about six such disasters per year in the 1990s.

"The frequency has accelerated in a relatively short period of time," Harris said. "The science is clear. Extreme weather will only get worse, and the climate crisis will only accelerate.''

The White House is leading a government-wide response to climate disasters that "recognizes the urgency of this moment and our ability to do something about it," Harris said, adding that leaders such as herself and President Joe Biden "have a duty to act, not only after disaster strikes, but before disaster strikes, and that is why we are here today.''

The billion-dollar grant program announced by Harris doubles spending from last year on programs to defend against extreme weather events across the country. Biden announced last month that the administration will double spending yet again in the budget year that begins in October, spending $2.3 billion to help communities cope with soaring temperatures through programs administered by FEMA, the Department of Health and Human Services and other agencies.

UN climate report says world to get sicker, more dangerous in next 18 years

A U.N. panel published a new report on Feb. 28, 2022, summarizing the latest information on global warming and its effect on people.

The Building Resilient Infrastructure and Communities, or BRIC, program, supports states, local communities, tribes and territories on projects to reduce climate-related hazards and prepare for natural disasters such as floods and wildfires. The program is funded through FEMA’s Disaster Relief Fund and the bipartisan infrastructure law signed by Biden last year.

A total of $1 billion will be made available through the BRIC program, with another $160 million to be offered for flood mitigation assistance, she said.

"My city doesn’t debate whether the climate is changing, we simply look at the ground on a sunny day and see flooding," Gelber said.

Kern County, California received nearly $40 million for underground water storage to allow access to clean water during droughts, while Austin, Texas received money to begin upgrading its power grid "so that homes and businesses and houses of worship can keep on the electricity during summer and winter storms,'' Harris said.

The grant program is among a series of Biden administration actions intended to reduce heat-related illness and protect public health, including a proposed workplace heat standard.