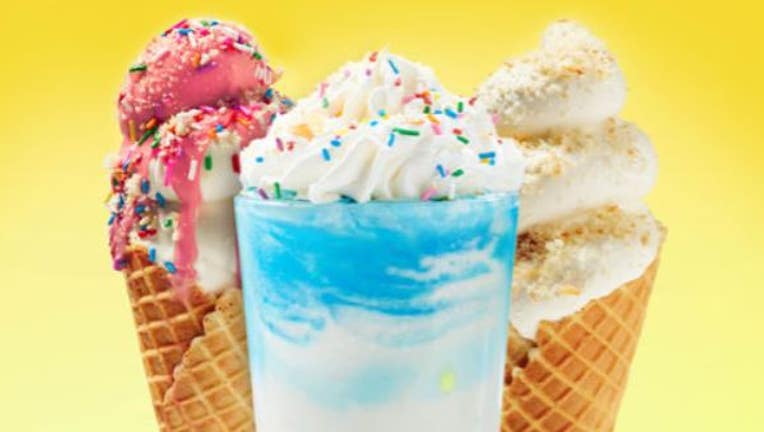 WASHINGTON - Summer is officially here and we’ll all look for ways to cool off in the hot temperatures. And Krispy Kreme is offering relief from the heat in the form of frozen desserts with the launch of their new soft serve ice cream.

The tasty treats are inspired by some of the franchise’s popular donut flavors and they’re available in shakes, cones, and cups.

RELATED: Krispy Kreme looks to ice cream for future of its doughnut shops

This creative frozen lineup features three ice cream flavors and seven tasty shakes. The ice cream comes in a cone or cup in the flavors of original cone glazed, chocolate iced cone, and the strawberry iced sprinkle cone. And if you’re in the mood for a shake, Krispy Kreme offers a variety of fun choices like the original glazed shake, birthday batter shake, and chocolate iced shake.

These delectable items are available at select Krispy Kreme stores and may vary by location.

Krispy Kreme said in a release that the first 10 markets to take part in the ice cream launch are Charlotte, Greensboro and Winston-Salem in North Carolina; Greenville, South Carolina; Norfolk and Newport News, Virginia; Charleston, West Virginia; Nashville and the Tri-Cities area in Tennessee, and San Antonio, Texas.

Additionally, the soft serve ice cream will expand to Krispy Kreme stores in Mobile and Southwest, Alabama; Tampa, St. Petersburg and Pensacola, Florida; New Orleans; Louisiana, Branson, Missouri; and Wichita, Kansas.  The company did not give a specific date for the launch.

"The introduction of Original Glazed Soft Serve Ice Cream is a big day for Krispy Kreme and our fans," Dave Skena, Krispy Kreme Chief Marketing Officer said in a statement. "Our fans love Krispy Kreme doughnuts, and they also love rich, creamy, ice cream. We’re confident their love of ice cream and for Krispy Kreme is going to go to an entirely new level after they experience these deliciously unique shakes, cones and cups. We’re thrilled to begin our rollout on the first day of summer."

The donut titan delving into the frozen dessert space is an endeavor they announced a few years ago.

Back in 2019, Krispy Kreme started selling "doughnut-infused ice cream" as milkshakes and sandwiches for what the company called a "comprehensive shop redesign" at some of its stores, per FOX 29 Philadelphia and FOX Business.

FOX 29 Philadelphia and FOX Business contributed to this story. This story was reported from Washington, D.C.