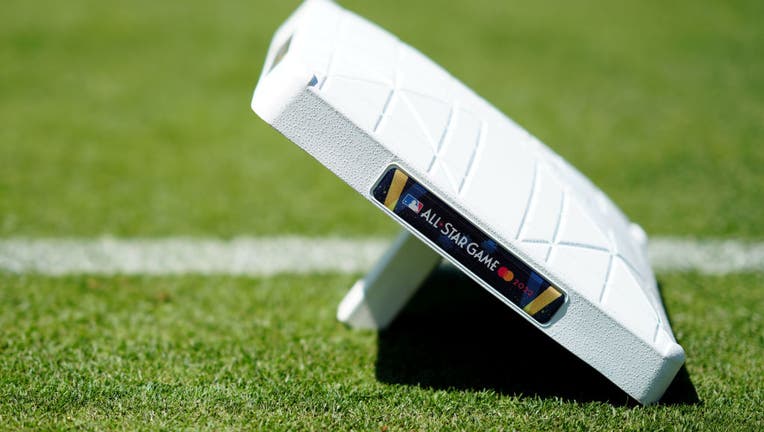 A detail shot of an All-Star base on the field prior to the MLB-USA Baseball High School All-American Game at Dodger Stadium on Friday, July 15, 2022 in Los Angeles, California. (Photo by Daniel Shirey/MLB Photos via Getty Images)

The 92nd MLB All-Star Game is set for Tuesday, July 19 on FOX, with the Los Angeles Dodgers hosting for the first time in 42 years.

Dodger Stadium had been scheduled as the site in 2020 before the COVID-19 pandemic shortened the schedule and the game was canceled. Last year’s game was played in Denver.

The stadium, LA Live in downtown Los Angeles and the Santa Monica Pier located 18 miles west of Chavez Ravine have been the backdrops for events that began Friday.

Fans can head to the Santa Monica Pier or the LA Convention Center this weekend to catch the MLB All-Star experience.

From Friday through Sunday at the Santa Monica Pier and nearby beach, fans can attend free events that include instructional youth baseball and softball, a daily yoga class and baseball-themed sand sculptures. Batting and pitching cages will be set up on the pier. MLB joined Heal the Bay to stage a beach cleanup on July 16.

The MLB draft begins Sunday night on the outdoor plaza at LA Live. The Home Run Derby is July 18, the same day workouts will be held. And the All-Star Game is Tuesday evening, July 19.

Capitalizing on the 42 years since they hosted, the Dodgers will be honoring Jackie Robinson, who wore No. 42 when he broke baseball’s color barrier with the franchise 75 years ago. His widow, Rachel, turns 100 on the day of the All-Star Game.

Jackie Robinson was far from the first Black man to play in the major leagues. Here are the four Black men who preceded him.

RELATED: On Jackie Robinson Day, remember the Black men who played in the majors before he broke the color barrier

The Dodgers last hosted the All-Star Game in 1980, when they had four selections: Steve Garvey, Davey Lopes, Bill Russell and Jerry Reuss, who was the winning pitcher. The National League beat the American League, 4-2. Future Dodgers pitching coach Rick Honeycutt was an AL reliever.

The Dodgers first hosted the game in 1959 when they played at the Los Angeles Memorial Coliseum after moving to the West Coast from Brooklyn. Dodger Stadium, third-oldest in the majors, didn’t open until 1962.

It will be aired on FOX.

Here’s a full list of the rosters for the American and National League All-Star teams. An asterisk is for players who are inactive or have chosen not to play in the game.

This story was reported from Detroit. The Associated Press and FOX Television Station’s Daniel Miller contributed.