Aquariums, museums, casinos, and boardwalk amusements reopened for business in New Jersey. But many rules and restrictions are in place to reduce the risk of spreading the coronavirus.

NEW JERSEY - For the first time in 108 days, slot machines will beep, dice will tumble and cards will be dealt at Atlantic City's casinos Thursday as they reopen amid a coronavirus pandemic that has drastically changed things both inside and outside the casino walls.

Gamblers will not be allowed to smoke, drink or eat anything inside the casinos. They will have to wear masks while in public areas of the casino, and they will have their temperatures checked upon entering.

Five of the nine casinos — Hard Rock, Ocean, Resorts, Tropicana and Golden Nugget — will open their doors Thursday morning, the first day New Jersey allows them to. Three others, Caesars, Bally's and Harrah's, will reopen Friday, after allowing their highest rollers a one-day head start on Thursday.

Only the Borgata, the city's top-performing casino, will remain shut. It quickly decided to scrap its planned reopening after New Jersey Gov. Phil Murphy canceled permission for indoor dining in the state, and imposed smoking and drinking bans on the casinos. The Borgata has not set a reopening date.

“Honestly, we were totally surprised,” said Ron Baumann, regional president of Caesars Entertainment, which owns three Atlantic City casinos. “Our plans were to open up the restaurants at 25% capacity, and we were ready to do that. We've spent the last 2 1/2 days scrambling to come up with a new plan.”

The casinos can offer take-out food to be eaten outdoors or in hotel rooms. Those that have outdoor beach or Boardwalk bars will use them; others are improvising by bringing food trucks to their entrances, or, as Harrah's is doing, moving a portable version of its Gordon Ramsay steakhouse to a tented rooftop area, dubbing it “Ramsey On The Roof.”

Resorts is using ultraviolet light among its disinfectants, and each of the casinos has brought on extra cleaning staff to give extra attention to slot machines, kiosks, bathrooms and guest rooms.

Many casinos have erected plexiglass barriers to separate card players, and most have turned off slot machines at specific intervals to enforce distance between people who play them. 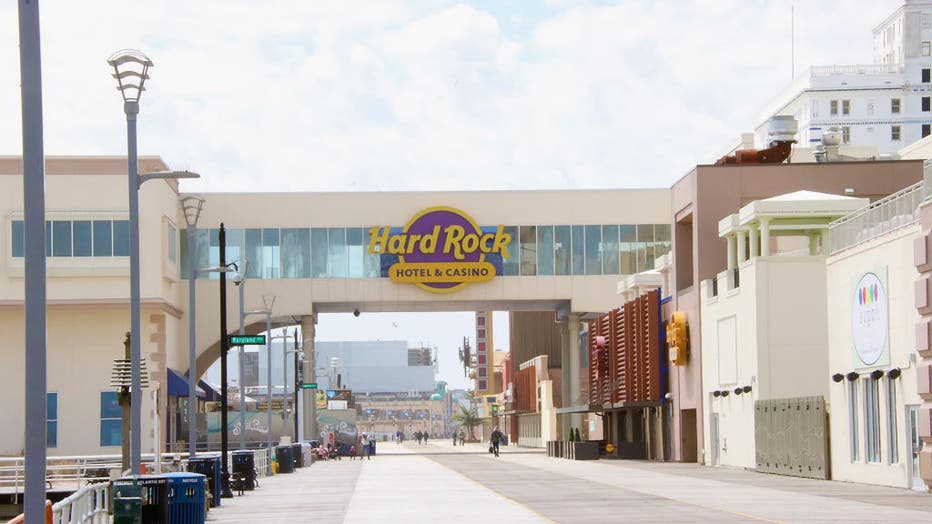 ATLANTIC CITY, NJ - APRIL 14: The Boardwalk heading south toward Hard Rock Casino during the coronavirus pandemic on April 14, 2020 in Atlantic City, New Jersey. COVID-19 has spread to most countries around the world, claiming over 130,000 lives and

New Jersey shut down the casinos on March 16, and visitors returning to Atlantic City will notice some changes since then. They'll drive past billboards on the Atlantic City Expressway advertising concerts by ‘70s pop acts that were never held. And when they stop at the first traffic light at the end of the Expressway, they’ll notice some stores in Atlantic City's outlet mall district that are still boarded up from a night of protests on May 31 over the death of George Floyd days earlier.

The 3 1/2-month shutdown has been devastating to the casinos' finances, as well as those of the thousands of people who work in them. In April, the first full month the casinos were closed, Atlantic City's gambling revenue declined by nearly 69% compared with the same month a year earlier. Statistics for May and June were similarly dire.

And many laid-off casino workers — including some who until Monday night expected to be back at work within days — will remain without a job. Bob McDevitt, president of the main casino workers' union here, said 60% of his union members had been scheduled to return to work this week. Now, as few as 30% may go back because restaurant and beverage workers will not be needed.

“Unfortunately for our team members, we had to re-lay off a fair amount of people,” said Baumann, the executive whose company owns Caesars, Bally's and Harrah's. “It's excruciatingly difficult to do that.”