Nicholas Bahri says he was framed in murder of 3, including 6-year-old boy

Nicholas Bahri was convicted in Aprili of killing three people but on Wednesday, during his sentencing, he claimed it was a lie and cover up as he tried to use his time to speak to proclaim his innocence.

WARREN, Mich. (FOX 2) - By the time Nicholas Bahri walked out of the Macomb County room with a life sentence for the murder of three including a 6-year-old boy, he was sent off with applause and was told to ‘rot’ and ‘take that L’. What came before, however, was 25 minutes of him arguing with the judge, family members yelling at him, and him asserting that he was the victim of a cover-up.

In April, Bahri was convicted of killing Tai'raz Moore, 6, and Isis Rimson, 28, who were shot execution-style in the basement of a home on Otis Street in Warren on Oct. 1, 2020. Tai'raz' father, Tukoyo Moore, was found in a burned car in Detroit. Rimson was Moore's girlfriend.

At the time of the murder, Warren Police Commissioner Bill Dwyer said the three were murdered because of drugs and money, something Bahri tried to address during his time in court on Wednesday. After family members of Tai'raz, Isis, and Tukoyo gave their statements, Bahri tried to assert multiple times that he wasn't guilty, despite the decision by the jury.

Sentencing for man convicted of execution-style murders of boy, 2 others, includes defiant claims

Saying he was set up and claiming he was the fall guy in three execution-style murders including of a 6-year-old, Nicholas Bahri pleaded in court before he was led away to a life sentence.

After the family spoke, Bahri got his chance to speak in what's called allocution. This is the direct address between the judge and the convicted defendant prior to his sentencing.

MORE FROM COURT: 'He destroyed 6 families': man convicted in murder of three including boy gets life in prison

Bahri walked up and immediately turned the podium to face the cameras and gallery in the courtroom, which included the family. He asked for a drink and told the judge that he couldn't breathe before then saying his attorney should sit down because he "(doesn't) need him here".

Bahri had previously asked the judge to remove his attorney and said he wanted to represent himself during his sentencing. 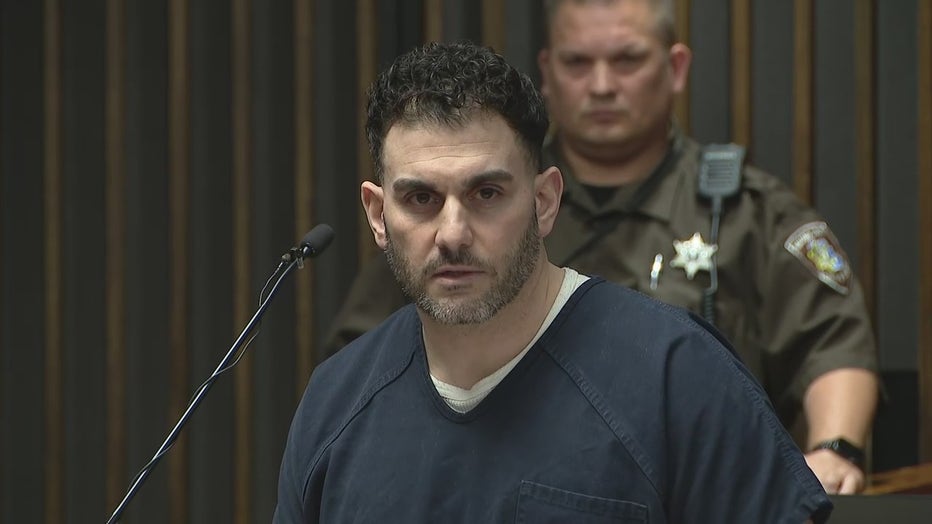 Nicholas Bari, convicted of three murders including a 6-year-old, was defiant in court as he was sentenced to life in prison.

With that, Bahri opened his notes and told the family they needed to know the truth about Moore's death and said the family's remarks about the deaths were unbearable.

"The hardest thing I've ever had to do is sit here and keep my chin up through the impact statements. It was unbearable," he said. "I appreciate your passion even though the passion is directed toward me."

He then promised that the details of Sept. 30, 2020, would be shocking but that the family deserves to know the truth. He said that the police and prosecution were not acting "in the proper manner" and they were hiding the truth about Moore's death.

"(Moore) was last known alive in my driveway. My surveillance system shows Moore and me leave together at 9:30. They know nobody was shot and killed in my driveway," Bahri said.

The judge in the case, Ed Servitto, Jr, interrupted Bahri at this stage and told him they were not ‘going to re-try’ the case. That only made Bahri angry, who said the jury got it wrong and the family needed to know what he said was the truth.

"I am innocent and I can explain the whole case from front to back!" Bahri said. "The jury got bamboozled. The family deserves to know."

Judge Servitto wasn't going to allow Bahri to present evidence in the case. He said that Bahri got his chance during the trial.

Bahri, however, said that the Warren detective was lying under oath and, when authorities said Moore was shot and killed in Bahri's driveway, that wasn't true.

He said that Moore had returned from West Virginia the previous day and that there was an exchange of money between the two men. That, he said, was on his surveillance video. Bahri said that Moore had multiple phones and the victims would understand if authorities had looked harder.

According to Bahri's statement, which was punctuated with interruptions from the judge multiple times to get him to stop introducing evidence after the case had ended, Bahri and Moore were under investigation for months prior to his murder and they found an illegal gun on Moore's truck.

Bahri discussed shipments from Canada with GPS trackers and more, to which Judge Servitto stopped him and said that his allocution was sounding more like a confession.

"It sounds to me that you may be confessing to other wrongdoings," Judge Servitto said.

That drew laughter from the gallery while Bahri maintained that he was innocent and even the judge was hiding the truth.

He said the detectives lied under oath and repeatedly stated that his own surveillance footage was not doctored, claiming that the evidence presented by Warren Police as fact was edited.

"Reasonable doubt is now reasonable lies and secrets," Bahri said. "I am the bleeding definition of innocence. I am not on camera shooting Tukoyo Moore. I never shot my friend, period. It's a non-argument."

He then took a shot at the news coverage of the murder, saying that his story was not a movie.

Bahri then once again went after the detectives and said they lied under oath to which Servito cut him off and told him he was done.

He was ordered to sit down as Servitto read his sentencing of life in prison without parole. Bahri kept talking, trying to say he wasn't in the home where the other two were killed but Servitto kept moving.

After the sentencing, Bahri was led out of the courtroom as a few members of the gallery clapped, told him to ‘rot’, and to ‘take the L’.