Three police officers have been placed on administrative leave after they reportedly watched as a man drowned in Tempe Town Lake, transcripts revealed.

TEMPE, Ariz. - Three police officers have been placed on administrative leave after they reportedly watched as a man drowned in Tempe Town Lake, transcripts revealed.

The incident began as a reported domestic violence situation at Tempe Beach Park between the man, identified as Sean Bickings, and his wife. Both denied that any fight had taken place.

When officers were called, Bickings reportedly tried to run away from them by fleeing into the lake. He was unable to get out of the water, and eventually drowned.

Bickings was later found by Tempe Fire's Dive and Rescue team in a portion of Tempe Town Lake located near the Tempe Center of the Arts. The man was pronounced dead at the scene.

On June 3, Tempe officials released new information on the incident.

In the statement, the person who drowned was identified as 34-year-old Sean Bickings, who was an "unsheltered Tempe community member." Officials say police officers were called to the lake just after 5:00 a.m. on May 28 by a Downtown Tempe Authority ambassador for a reported disturbance between Bickings and his companion.

"When officers arrived, they spoke to Bickings and his companion, who cooperated fully and denied that any physical argument had taken place," read a portion of the statement. "Neither were being detained for any offense."

Officers, according to the statement, later told the two that they were running their names through a database that is used to check whether people have outstanding arrest warrants, which is standard procedure.

"That check had not yet been completed when Bickings decided to slowly climb over a 4-foot metal fence and enter the water. Officers informed him swimming is not allowed in the lake," read a portion of the statement. "He swam about 30-40 yards before repeatedly indicating he was in distress. He soon went under and did not resurface." 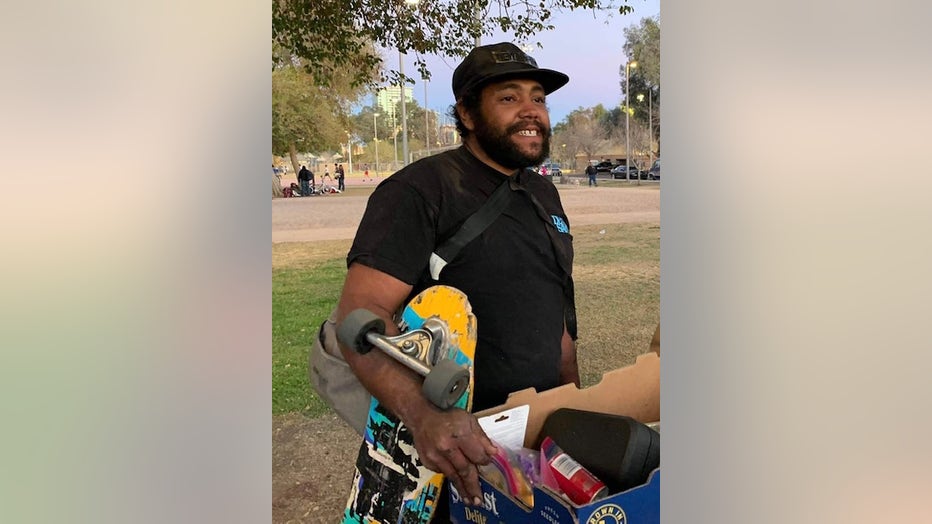 In a transcript of conversations released by Tempe Police, an officer, only identified as ‘Officer 1,' was noted as telling Bickings that he won't be going into the lake.

"I'm drowning," Bickings, noted as ‘victim’ in the transcript, said.

"Come back over to the pylon," an officer, noted as ‘Officer 2' in the transcript, said.

In the transcript, an officer reportedly threatened to detain his wife, telling her, "If you don't calm down, I'm going to put you in my car."

The rest of the document reveals how his wife continued to beg them for help while the officers continued to tell her to calm down.

"I'm just distraught because he's drowning right in front of him and you won't help," she said. Police tell her that another officer is getting a boat.

An officer noted that Bickings hadn't resurfaced from the water for 30 seconds.

Officials say the city has asked DPS and Scottsdale Police to examine the police's response to the drowning.

"The three Tempe police officers who responded to the call and witnessed the drowning have been placed on non-disciplinary paid administrative leave pending the investigations, as is customary in critical incidents," read a portion of the statement.

The man, according to police, fled from police as they were investigating an apparent domestic situation at Tempe Beach Park.