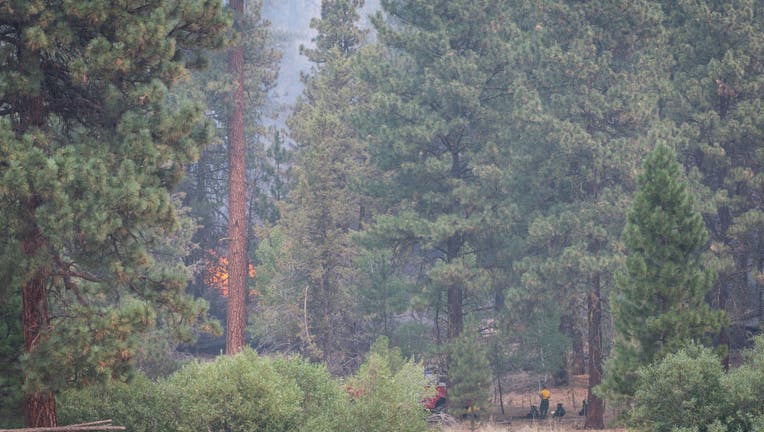 MARIAL, Ore. - A man suspected of starting fires in a rural area of southern Oregon was detained by three residents who tied him to a tree until authorities arrived.

The Curry County Sherriff’s Office received a call around 1:45 p.m. Monday about active fires in Marial, a community located about 95 miles northwest of Medford.

A Bureau of Land Management employee who was in the area saw a man walking along a gravel road that leads toward the Marial Lodge and Rogue River Ranch and "starting fires," according to the sheriff’s office.

Several agencies, including local, state, and federal authorities, were dispatched to respond to the report of two separate fires burning.

Meanwhile, three area residents spotted the suspect, identified as 30-year-old Trennon Smith, walking on the roadway near the flames and detained him until law enforcement arrived on the scene, the Curry County Sheriff’s Office said.

The residents said Smith became "very combative" and had to be tied to a tree to subdue him. An ambulance crew responded due to some injuries he apparently received from falling down, officials said.

Helicopters, ground crews, and area residents quickly "got the two fires under control and contained."

"The quick actions on getting the fires out most certainly averted a catastrophe and saved lives," the sheriff wrote in a post on Facebook. "The total area burnt is less than one acre."

"If the fires had not been contained and if they got out of control, they could have blocked all the residents and visitors from having an escape route," the sheriff’s office added.

Smith, from Veneta, Oregon, was first transferred to a local hospital and later arrested on two charges of first-degree arson and one count of reckless burning. Smith was also booked on a Lane County detention warrant for a probation violation, officials said.