Gen. Mark Milley told cadets graduating from U.S. Military Academy West Point Saturday to be prepared for increasing risk of global conflict and a host of new weapons technologies in their careers.

"The world you are being commissioned into has the potential for a significant international conflict between great powers. And that potential is increasing, not decreasing," Milley, the chairman of the Joint Chiefs of Staff, told the cadets at the 2022 commencement ceremony in West Point, New York. 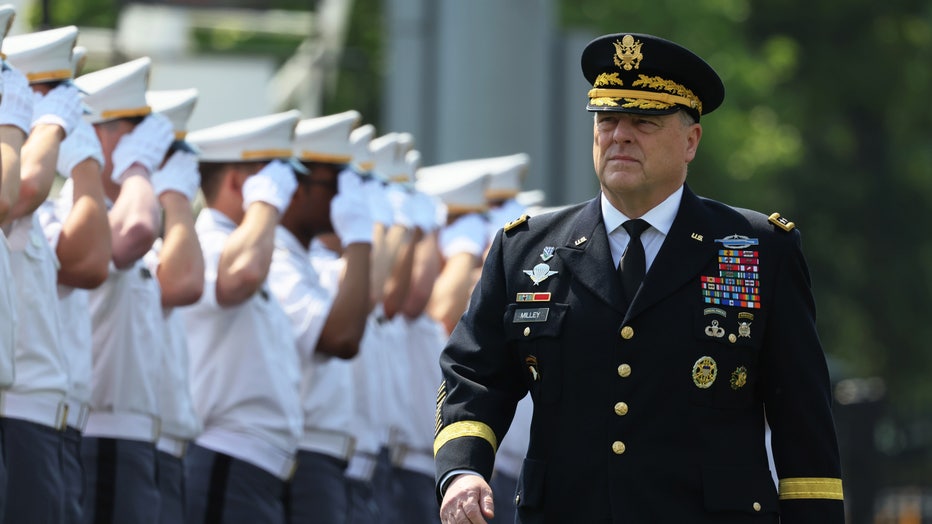 WEST POINT, NEW YORK - MAY 21: Mark A. Milley, Chairman of the Joint Chiefs of Staff, arrives for the 2022 West Point Commencement Ceremony at West Point Military Academy on May 21, 2022 in West Point, New York. (Photo by Michael M. Santiago/Getty Im

"And right now, at this very moment, a fundamental change is happening in the very character of war. We are facing right now two global powers, China and Russia, each with significant military capabilities, and both who fully intend to change the current rules based order," Milley said.

Russia's invasion of Ukraine is teaching the world that "aggression left unanswered only emboldens the aggressor," Milley said.

"Let us never forget the massacre that we have just witnessed in Bucha nor the slaughter that occurred in Mariupol. And the best way to honor their sacrifice is to support their fight for freedom and to stand against tyranny," Milley said.

The urban character of the war in Ukraine is something Milley sees as a characteristic of future battlefields, which will be "highly complex and almost certainly decisive in urban areas against elusive, ambiguous enemies that combine terrorism and warfare alongside conventional capabilities — all embedded within large civilian populations."

Weapons technology will also change dramatically in future decades, Milley said, and the shift will be as radical as the change from musket to the rifle, the rifle to the machine gun or from sailing to steam ships. And the technological edge is no longer automatically in America's favor.

"You'll be fighting with robotic tanks and ships and airplanes," Milley said. "We've witnessed a revolution in lethality and precision munitions. What was once the exclusive province of the United States military is now available to most nation states with the money will to acquire them." 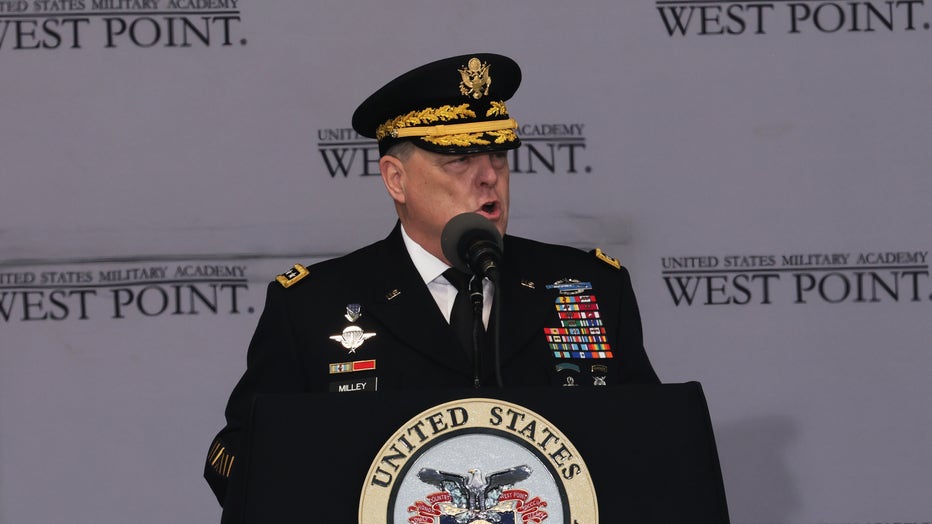 WEST POINT, NEW YORK - MAY 21: Mark A. Milley, Chairman of the Joint Chiefs of Staff, speaks during the 2022 West Point Commencement Ceremony at West Point Military Academy on May 21, 2022 in West Point, New York. (Photo by Michael M. Santiago/Getty

Artificial intelligence is "resulting in that profound change, the most profound change ever in human history," Milley said. "Whatever overmatch we the United States enjoyed militarily for the last 70 years is closing quickly. And the United States will be, in fact, we already are challenged in every domain of warfare in space and cyber, maritime air and, of course, land."

In the midst of all the risks and changes, Milley's encouragement to future military leaders was to stay adaptive, resilient and most of all, be of impeccable moral character.

"We must, we have to, develop leaders who have incredible character under the intense pressure of ground combat, and there is no greater crucible than ground combat. Leaders who will make the right moral and ethical choice, along with the right tactical choice in the most emotionally charged environment you will ever face."

Milley stressed the importance of the Constitution, and the oath cadets take to defend it. The message was so powerful that the Nazis feared it, America defeated Japan because of it, and the terrorists in al Qaida and ISIS hate it – "We swear an oath to an idea, and that idea is America," Milley said.

"The idea is that every single one of you, it doesn't matter if you're male or female or gay or something in between," he said. "It doesn't matter what race a person is, what religion or family a person belongs to." 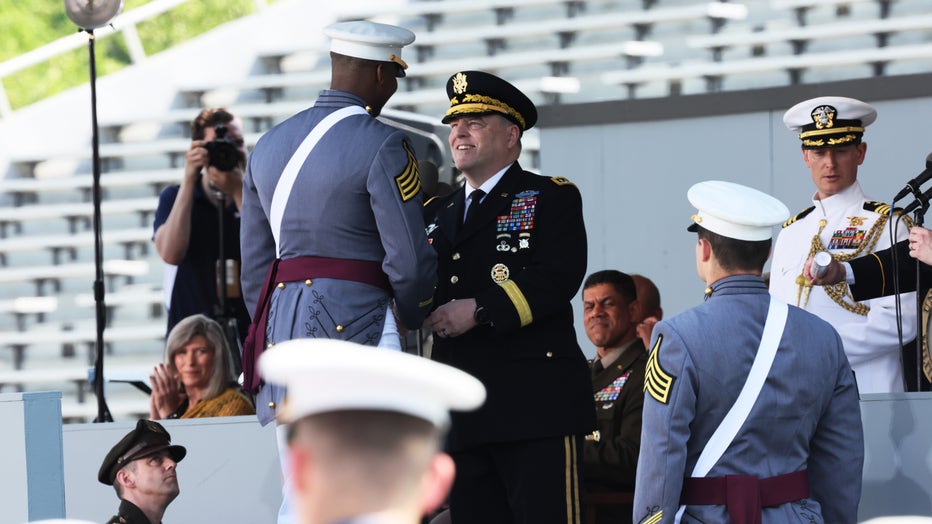 WEST POINT, NEW YORK - MAY 21: Mark A. Milley, Chairman of the Joint Chiefs of Staff, shakes the hands of West Point graduates as they receive their diplomas during the 2022 West Point Commencement Ceremony at West Point Military Academy on May 21, 2

"The idea that's in that document, the idea for which you are willing to die, the idea that in this constitution that propelled our nation through some of our darkest days, all it says is that in this country, in these United States, under these colors of red, white and blue, no matter who you are, every single one of us, by the grace of the Almighty God in Heaven, is an American, and every single one of us is born free and equal. And you will rise, or you are going to fall based on your talents, your merit, your attributes, your hard work, your perseverance," Milley said.

At one point, Milley said he was reminded of his own graduation 43 years ago, and quoted a Bob Dylan song. "We can feel the light breeze in the air. And right now, as we sit here on the plane at West Point, we can see the storm flags fluttering in the wind and we can hear in the distance the loud clap of thunder. And hard rain is about to fall."