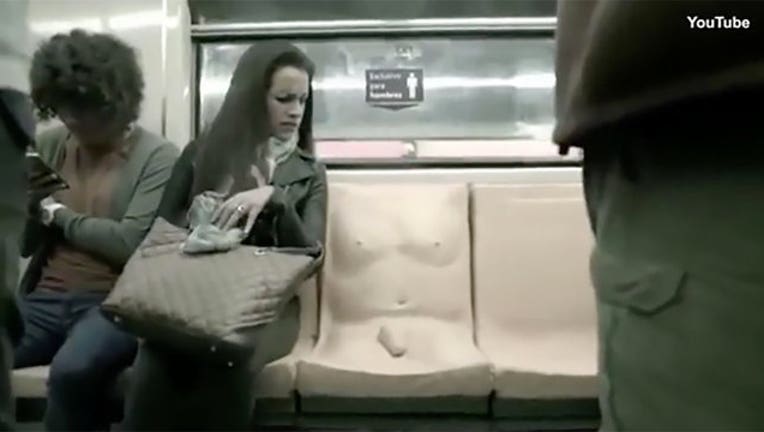 A frame grab from a video of the “men only” seat on the Mexico City Metro, part of a campaign against sexual harassment. (Credit: YouTube)

(FoxNews.com) - In an intentionally provocative effort to raise awareness of rampant sexual harassment on Mexico City subways, the city has installed a “penis seat” on one of its busiest trains.

In a mysterious PSA that has gone viral alongside the hashtag #NoEsDeHombres, the seat has been installed on Mexico City’s No. 7 line train under a sign that reads “Exclusive for Men.”

The seat, which as the name suggests features a representation of a male torso on the back and a flaccid penis on the seat itself, has gotten quite a rise out of some of the unsuspecting men who have sat down on it. The PSA shows men jumping up in surprise or squirming uncomfortably after sitting down on the seat.

Besides the “Exclusive for Men” sign, there is also an explanation at the foot of the seat that states: “It is annoying to travel this way, but not compared to the sexual violence women suffer in their daily commutes.”

The Mexican government reports that 65 percent of women in the capital have been sexually harassed on buses or trains and, as the video notes, “nine out of 10 women in Mexico City have been victims of some form of sexual violence” in general.