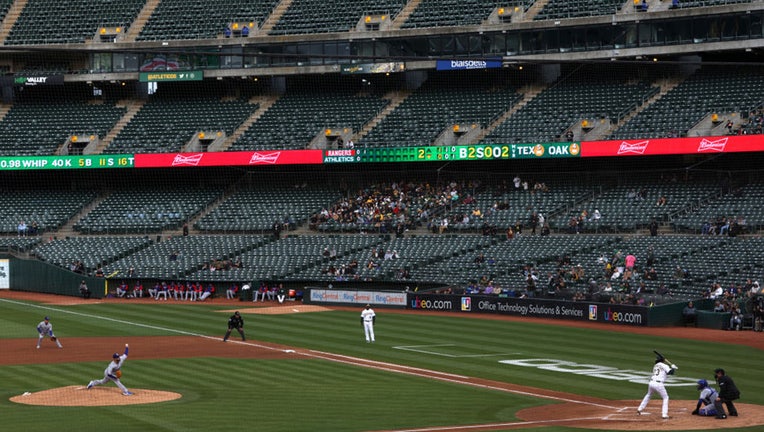 FILE - The Oakland Athletics play the Texas Rangers in front of nearly empty stands at RingCentral Coliseum on May 26, 2022, in Oakland, Calif. (Justin Sullivan/Getty Images)

MILWAUKEE - Blame it on lingering effects of the pandemic, resentment over the lockout or economic fears.

Major League Baseball is struggling to fill the stands at pre-COVID levels as the sport heads into the last 2 1/2 months of its first season since 2019 without capacity restrictions.

League officials remain encouraged and point to the recovery.

"We have come back to between 94-95% of where we were prior to the pandemic," MLB chief revenue officer Noah Garden said. "So we feel really good about the progress we have made on the attendance side rebounding strongly from a situation that threatened the very core of how we operate as an industry."

Attendance is up over 70% from the season-ending average in 2021, when only Texas started at full capacity and all 30 teams weren't at 100% until July 2. MLB played its abbreviated 2020 regular season without spectators.

While MLB’s average attendance had fallen each year since 2015, most of the drops were by less than 2%. Average attendance was over 30,000 for 14 straight seasons from 2004-17 but hasn't reached that mark since.

"Attendance has been dropping about 1% a year — year after year — for about the last 15 years," said Victor Matheson, a Holy Cross economics professor who specializes in sports economics. "Major League Baseball attendance peaked in 2007 and has been falling pretty consistently year after year for over a decade. What we’d just normally expect after about three years is about 3% lower attendance."

Bob Heaning, a 48-year-old fan from Cranford, New Jersey, said he used to attend about a dozen New York Yankees games per year. He’s attended just three this season, has tickets for two more games and doesn’t plan to attend any others.

Heaning said he stopped going as often because he bought a house last year and is staying at home more often, but he also believes the high price of attending games may be keeping fans away. That could prove particularly true this year as inflation causes more people to spend more carefully.

"I think people are maybe more concerned," Hearing said. "There’s not as much expendable income."

"If travel's disrupted, either by expensive gas prices or expensive airline tickets or just general travel disruptions, that could make a big dent," Matheson said.

Charles Lindsey, an associate professor of marketing at the University at Buffalo School of Management, noted that single-game ticket sales remain solid but season ticket sales have gone down. He said the NBA faced a similar problem this season.

Lindsey cited inflation as a leading cause and said the pandemic may have contributed to a lesser extent.

Lindsey believes dissatisfaction because of the lockout may have caused some fans not to renew their season tickets. He also speculated some franchises might have reduced their staffs during the pandemic and paid for it with reduced ticket sales.

Teams have been particularly hard hit in group sales.

Rick Schlesinger, the Brewers’ president of business operations, said last month at a Milwaukee Press Club gathering that the team’s group-ticket sales normally total about 600,000 annually. Schlesinger estimated that total would be about 400,000 this season.

He noted some businesses are still working remotely and therefore are having fewer group outings, and that not as many schools as usual have made ballpark trips.

"The group business has not returned to anywhere near normal levels, frankly not surprisingly," Schlesinger said.

Oakland's attendance has plunged nearly 55% from its 2019 All-Star break level. The Athletics dramatically cut payroll amid concerns about the franchise’s future in the Bay Area as they seek a new stadium.

The 99-day MLB lockout has come to a close of March 10, according to the Associated Press, as players voted to accept the league's latest labor deal offer, thus salvaging a 162-game regular season.

This year's 99-day lockout wasn’t settled until March 10, resulting in a revised schedule.

"That absolutely affected the cadence of our ticket sales, both our single-game tickets and our groups," Schlesinger said. "We were trying to sell group tickets in an environment where I couldn’t tell you exactly when our season was going to start or what our home schedule was going to look like."