WASHINGTON - Scientists continue to track multiple cases of monkeypox across the United States.

According to the Centers for Disease Control and Prevention (CDC), there are currently 72 confirmed cases in the country — with 15 cases in New York and 15 in California as of June 14.

But, as the unusual disease continues to spread, it can invoke anxiety among Americans who fear another pandemic could be just moments away.

Tedros Adhanom Ghebreyesus, the director-general of the World Health Organization (WHO), said the risk of monkeypox becoming established is "real" and WHO is particularly concerned about the risks of this virus for vulnerable groups including children and pregnant women. 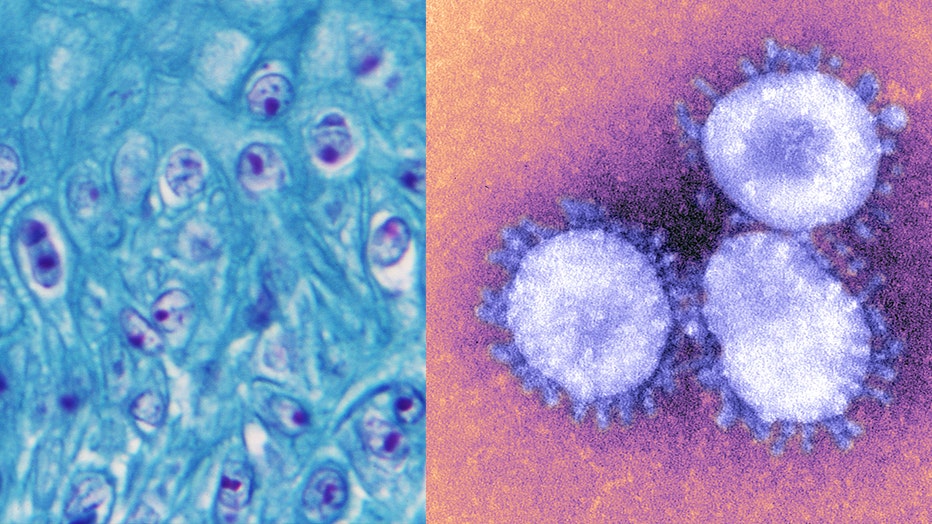 "Right now, this is an outbreak and outbreaks can be stopped. It’s critically important for countries to support the health services and to stop the onward transmission from the cases," WHO told FOX Television Stations.

But is monkeypox anything like COVID-19? How does the virus spread and what are the symptoms?

"Let's just say right off the top that monkeypox and COVID are not the same disease," Dr. Rosamund Lewis, head of Smallpox Secretariat at the World Health Organization, said last month.

So, let’s take a closer look.

How monkeypox is spread, caught vs. COVID-19

"Monkeypox and COVID-19 are very different diseases. They mostly spread in different ways," the WHO continued.

While it’s not exactly clear how people are exposed to monkeypox, early data suggest that gay, bisexual and other men who have sex with men make up a high number of cases.

Yet, the CDC notes anyone who has been in close contact with someone who has monkeypox is at risk.

The monkeypox virus can spread when a person comes into contact with the virus from an infected animal, infected person or materials contaminated with the virus. It can also cross the placenta from the mother to the fetus.

1st US monkeypox case confirmed for 2022

A case of monkeypox in the U.S. was confirmed out of Massachusetts on Wednesday. This is the first case reported in the U.S. this year.

The spread of monkeypox can come from a bite or scratch of the animal or can spread through direct contact with body fluids or sores of an infected person or materials that have touched the fluids or sores.

It is not yet known what animal maintains the virus in nature, although African rodents are suspected to play a part in monkeypox transmission to people. It is also currently unknown if monkeypox can spread through semen or vaginal fluids.

By contrast, experts say monkeypox spreads far less easily than COVID-19, and since it was first discovered in humans more than 50 years ago, scientists are already familiar with how it spreads and how to treat it.

While monkeypox transmission typically happens from close, skin-to-skin contact, the coronavirus can spread simply by talking with another person or sharing a room with someone who has been infected.

The CDC is urging healthcare providers in the U.S. to be alert for patients who have rash illnesses, regardless of whether they have traveled recently and regardless of gender or sexual orientation.

In humans, monkeypox symptoms are similar to but milder than the symptoms of smallpox. Monkeypox symptoms include fever, intense headaches, swollen lymph nodes, muscle aches and a rash that blisters and crusts. The rash tends to be concentrated on the face, palms of the hands and soles of the feet. The mouth, genitals and eyes may also be affected.

Similar to monkeypox, COVID-19 may also induce a fever. However, the coronavirus can also cause a dry cough, loss of taste and smell, and shortness of breath — symptoms not typically associated with those infected by monkeypox.

The monkeypox illness typically lasts for 2−4 weeks during which time a person can be infectious to others, and according to WHO, most people recover from the illness within a few weeks without treatment.

The agency notes that in some individuals, monkeypox can lead to medical complications and even death.

Newborns, children and people with underlying immune deficiencies may be at risk of more serious symptoms and death from monkeypox.

Complications from severe cases of monkeypox include skin infections, pneumonia, confusion and eye infections which can lead to loss of vision. Around 3–6% of reported cases have led to death in endemic countries in recent times, often in children or people who may have other health conditions.

"In endemic countries, the true burden of Monkeypox is unknown, but people continue to die of the disease, such as in the Democratic Republic of the Congo and Nigeria, as reported recently. The country has been reporting a case fatality ratio (CFR) among suspected cases of around 3%," WHO explained.

According to the CDC, endemic refers to the constant presence and/or usual prevalence of a disease or infectious agent in a population within a geographic area.

The difference between the terms endemic, epidemic and pandemic

Health officials define the level of disease in society using terms like endemic, epidemic, outbreak and pandemic. Here's what each term means.

In addition, the fatality ratio has been reported between 1-10% in the Congo Basin clade and up to 3% for the West African clade in the Africa setting.

While there are currently 72 confirmed cases in the U.S., so far, there have been no deaths associated with this outbreak.

Nationwide, there were 382 new deaths on Tuesday, according to data from Johns Hopkins University. Globally, more than 7,000 people lost their lives to the coronavirus during the first week of June.

"That’s seven thousand too many," Adhanom Ghebreyesus said in a press conference on June 8. "A new and even more dangerous variant could emerge at any time, and vast numbers of people remain unprotected. The pandemic is not over, and we will keep saying it’s not over until it is."

Vaccine for monkeypox vs. COVID-19

While there is not currently a monkeypox vaccine developed, there are several vaccines available for the prevention of smallpox that also provide some protection against monkeypox.

A newer vaccine that was developed for smallpox (MVA-BN, also known as Imvamune, Imvanex or Jynneos) was approved in 2019 for use in preventing monkeypox but is not yet widely available. WHO is currently working with the manufacturer to improve access.

Vaccinia immune globulin (VIG) may be recommended for severe cases. An antiviral that was developed to treat smallpox (tecovirimat, commercialized as TPOXX) was also approved for the treatment of monkeypox in January 2022.

This week the WHO announced it’s creating a new vaccine-sharing mechanism to stop the outbreak of monkeypox. The move could result in the U.N. health agency distributing scarce vaccine doses to rich countries that can otherwise afford them.

Adhanom Ghebreyesus said the agency is developing an initiative for "fair access" to vaccines and treatments that it hopes will be ready within weeks.

Yet, monkeypox symptoms often resolve on their own without the need for treatment, but WHO says it is important to take care of the rash by letting it dry if possible or covering with a moist dressing to protect the area if needed.

The organization suggests that those infected avoid touching any sores in the mouth or eyes. Mouth rinses and eye drops can be used as long as cortisone-containing products are avoided.

Meanwhile, at least 13 different vaccines have been administered for COVID-19 since 2020.

Most notably in the U.S are the Pfizer, Moderna and Johnson & Johnson vaccines, and health experts say these shots have been demonstrated to be safe and effective at reducing the risk of infection.