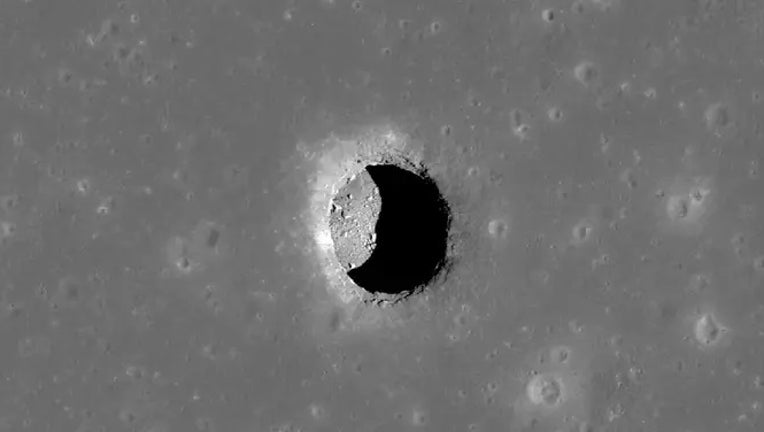 A typical forecast on the moon is nowhere near cozy, temperatures range from boiling during the day to 280 below zero at night. However, according to a new study, unique features known as moon pits could offer an oasis from the rollercoaster temperatures.

To learn what it might be like inside these lunar pits, a team of planetary scientists at UCLA used thermal imaging from NASA's Lunar Reconnaissance Orbiter and determined the temperature, at least in one of these pits, is always a consistent 63 degrees. The findings were recently published in the journal Geophysical Research Letters, and UCLA's newsroom is calling it the discovery of year-round "sweater weather."

One of the study authors, Tyler Horvath, a planetary science Ph.D. student at UCLA, said the pit could be the opening of a lava tube or cave and would be an ideal place to live for astronauts, offering perfect temperatures as well as protection from meteorites and radiation.

7 TIPS ON HOW TO SHOOT THE MOON… WITH A CAMERA

"Imagine a full day on the moon … you have 15 days of extreme hot that get up to well past the boiling point of water. And then you have 15 days of extreme cold, which is some of the coldest temperatures in the entire solar system," Horvath said. "So being able to be in a place where you don't have to spend energy to keep yourself warm throughout those 15 days of night is almost invaluable because during the night, if you're trying to use solar power as your main form of getting energy, you can't do that for 15 days."

The UCLA research team focused on the chasm in the Sea of Tranquility or the Mare Trenquillitatis region, which is about 220 miles from where Apollo 11 landed and also an equal distance to the Apollo 17 landing site.

A cozy pixel on the moon 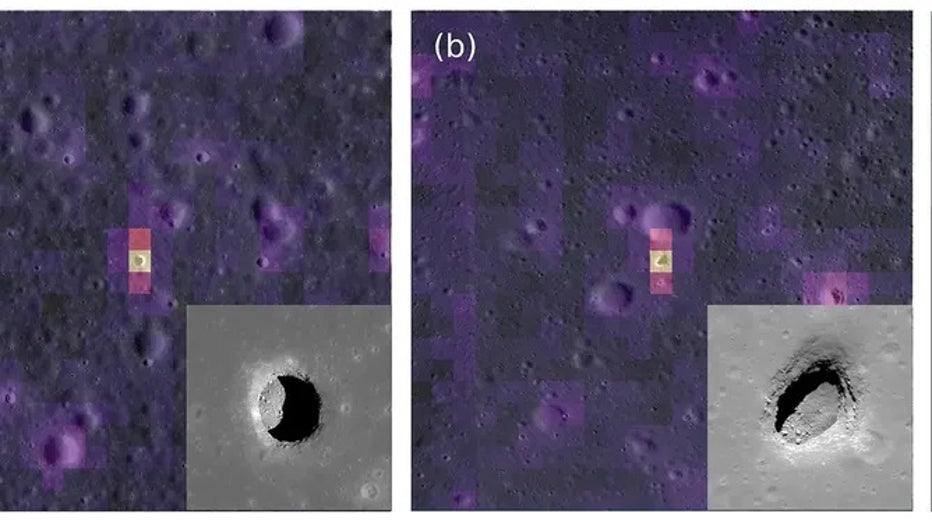 A 250 meter per pixel mapping using the mean of all Channels 6 and 8 brightness temperature measurements taken between 9 p.m. and 4 a.m. for (a) the Mare Tranquillitatis pit and (b) the Mare Ingenii pit. (Image: NASA/GSFC/Arizona State University/UCL

NASA's LRO spacecraft is continuously orbiting the moon, taking measurements with its suite of instruments, including the Diviner Lunar Radiometer, which has been mapping the moon's thermal emissions constantly since 2009.

UCLA Planetary Scientist David Paige is the principal investigator of the Diviner instrument and the lead author of the new study about the moon pit.

Horvath was assigned to create a 3D model of one of these interesting pits in the Mare Trenquillitatis region. During that process, the team noticed a single pixel in the infrared images that was warmer than most spots on the moon at night when temperatures plummet.

"We noticed that really quickly it was able to warm up and maintain kind of a warmer temperature than the surface usually does at night," Horvath explained. "We're like, 'Oh, this might be more interesting than we thought.'"

After rechecking the Diviner data and considering what sunlight the pit gets, the team determined the temperature of the pit floor during the day. Unfortunately, this doesn't confirm a cave opening, but that is still the working theory about these pits formed by ancient volcanic activity.

"It was still a cool result that if there's a cave there, it would support temperatures that are 63 Fahrenheit all the time, 24 seven every single day forever, basically," Horvath said.

How the Trenquillitatis pit and other caverns on the moon maintain their temperature comes down to a physics concept known as a blackbody cavity, which can self-regulate to keep its temperature.

The temperature at the bottom of the pit also depends on its position relative to the Earth and moon from the sun.

"If you're closer to the sun, the temperature would be hotter," Horvath said. "If you're further from the sun, it'd be colder."

How did lava tubes form on the moon? 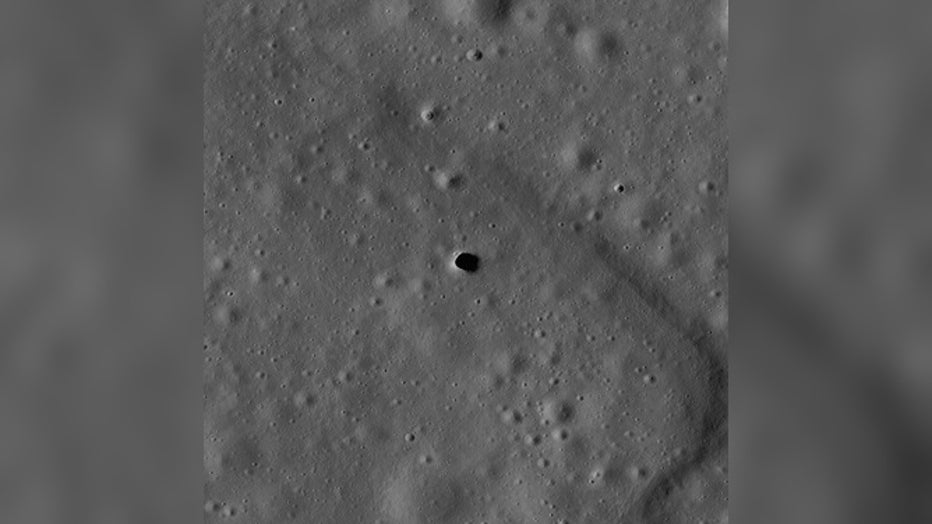 The Marius Hills pit, discovered by the Japanese SELENE/Kaguya Terrain Camera and Multiband Imager, is a possible skylight in a lava tube in an ancient volcanic region of the Moon called the Marius Hills. This LROC image is the highest resolution ima

Even from Earth, it's obvious the moon has interesting features, including craters of all shapes and sizes. In 2009, the Japanese spacecraft Kaguya orbiting the moon discovered a new type of lunar feature in the form of deep chasms that researchers believe could contain caves created by collapsed lava tubes, similar to ones found on Earth.

Horvath explains that billions of years ago, very intense volcanic activity and lava flows created the dark splotches we see today when we look up at the moon. The lava at the surface would cool first because it was exposed to the cold temperatures of space where the caverns below the lava still flowed.

"In some places, that lava will completely leave and will leave a hollow tube, a lava tube under the surface," Horvath said. "These pits are kind of our ways to see that they exist, that there's a way into them, and they could be everywhere."

NASA describes the moon pits as "skylights" where the roof of the lava tube collapsed. 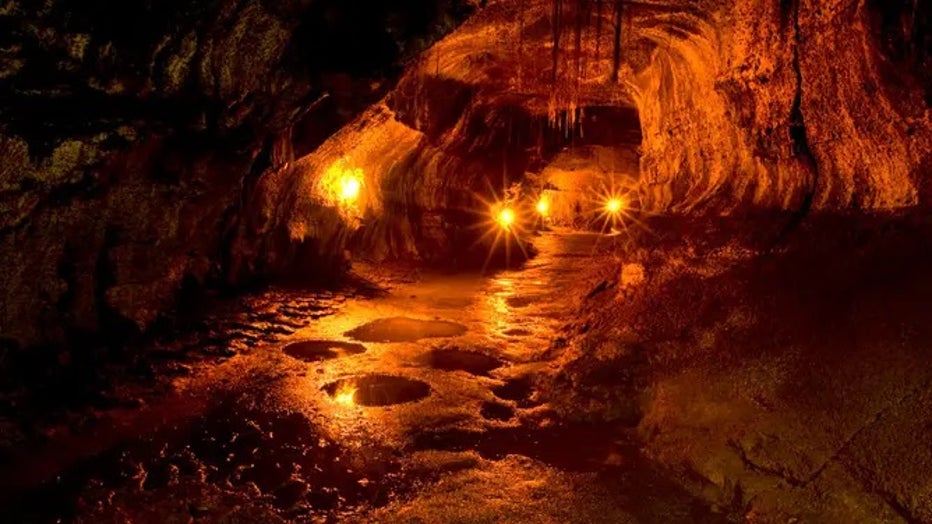 On Earth, the UCLA research team behind the study even visited a lava tube in Hawai'i Volcanoes National Park known as the Devil's Throat, which is similar in size to the Mare Trenquillitatis pit. The park is home to other lava tubes like the one pictured above that visitors can walk through.

Without physically going to the moon and rock climbing down into one of these pits, it will be hard for researchers to learn if these vast caves exist. Eventually, that might be possible because, in the next four years, NASA plans to return humans to the moon and establish a permanent base.