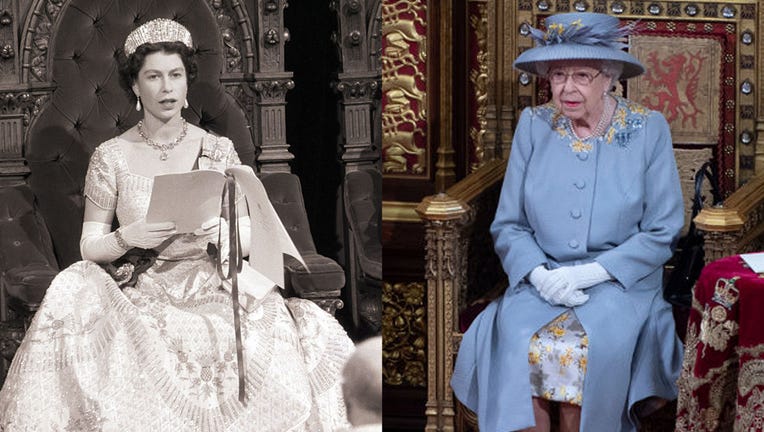 (L) Queen Elizabeth II becomes the first reigning monarch to open a session of the Canadian Parliament as she reads a speech from the throne in the Senate Chamber in Ottawa in 1957. (R) Queen Elizabeth II ahead of the Queen's Speech in the House of L

LONDON - What does the world look like without Queen Elizabeth II? The British monarch, who died on Thursday at age 96, served as a constant, stabilizing force throughout her 70-year reign. And most people alive today don’t know a world without her in it.

Elizabeth II became queen in 1952 at the age of 25 when Winston Churchill was prime minister. Known for her sense of duty and her devotion to a life of service, she ruled for longer than any other monarch in British history — and also traveled more widely.

Her passing represents not only the end of a long life but also incredible, institutional change that happens as a result.

"I think it’s not just a question of the response in the days after ... I think this will be an international trauma that’s going to last for probably months and years," Dr. Cindy McCreery, a senior lecturer of history at the University of Sydney in Australia, previously told FOX Television Stations.

Throughout Elizabeth’s seven decades on the throne, she served as an important figurehead for the U.K. and the Commonwealth during many of the 20th century’s biggest moments and times of enormous social change. She became widely respected at home and abroad. She was the only sovereign most people had ever known.

McCreery, whose main research field is monarchy and colonialism, predicted how the response in Britain to Elizabeth’s death will have the same profound impact as that of Princess Diana in 1997.

"I think if we reflect back on the response in Britain ... to the death of Princess Diana, which obviously was a very different context because it was a young woman in the prime of life and it was a very shocking and sudden accident, but nevertheless, that sort of collective hysteria I think is actually going to pale with response to Elizabeth," McCreery said.

The life and legacy of Queen Elizabeth II

The future of the Commonwealth

Elizabeth was also head of the diverse Commonwealth of Nations, a political, voluntary association of 56 member states — many of which are former British colonies — that she championed throughout her reign. She was also the head of state of 15 member states, known as the Commonwealth realms, including Australia, Canada, Jamaica, and New Zealand.

But with her death also comes more questions about the Commonwealth’s future. While some wealthier nations have retained the queen as their head of state, and will likely continue to do so under the new king, several members in the Caribbean have indicated a desire to shed another vestige of its colonial past.

Barbados stopped pledging allegiance to the queen in 2021 and became a republic, and officials in countries like Belize, the Bahamas, Jamaica, Grenada, Antigua, and Barbados have indicated they’d like to do the same.

While countries can remain in the Commonwealth if they become republics, it adds to the uncertainty around an organization that the queen’s personal commitment helped to unite.

Even in the wealthier nation of Australia, there are complicated feelings toward Britain and the monarchy’s role. Australia is a constitutional monarchy, where Elizabeth served as the sovereign and played important ceremonial and symbolic roles. But amid growing support for becoming a republic, many have predicted a surge in republicanism after her death.

Former Australian Prime Minister Malcolm Turnbull once described Elizabeth as "an extraordinary head of state," but noted how "in Australia, there are more Elizabethans than there are monarchists."

For Charles, who now steps into the role he’s been waiting to fill all of his life, his relationship with the public has always been more complex.

Charles was officially designated to be the queen’s successor as the Commonwealth’s ceremonial head in 2018. He has hailed the Commonwealth’s potential to make a difference on issues such as climate change and opportunities for young people, "and, in so doing, to be an unparalleled force for good."

‘Identity crisis’ for the monarchy, UK

In recent years, the monarchy itself has been buffeted by allegations of racism and bullying, a sex scandal involving Prince Andrew and demands that they apologize for Britain’s historic role in the enslavement of millions of Africans.

The royals, which also include Prince William and Catherine, Duchess of Cambridge, know that public support is crucial to the monarchy’s survival.

Since assuming the throne after the death of her father on Feb. 6, 1952, Elizabeth was a symbol of stability as Britain negotiated the end of the empire, the dawn of the information age, and the mass migration that transformed the country into a multicultural society.

Throughout it all, the queen built a bond with the nation through a seemingly endless series of public appearances. She opened libraries, dedicated hospitals, and bestowed honors on deserving citizens. Her face is printed on paper money around the world.

While the majority of Britons have consistently been in favor of continuing the monarchy, there has also been a decline over the last decade, from a high of 75% in favor of a monarchy in July 2012, to 62% in June 2022, according to YouGov.

But monarchy aside, surveys time and time again captured Elizabeth’s own popularity among the people.

Tina Brown, author of "The Diana Chronicles" and "The Palace Papers" has talked about the huge national moment of uncertainty that comes with her death. She’s suggested that will spark a "massive identity crisis" for the monarchy, and among the people who now find themselves in the post-second Elizabethan era.

"How will anyone know how to be British anymore?" she mused.

RELATED: What happens when the queen dies? All about Prince Charles’ succession, accession and coronation

This story was reported from Cincinnati. The Associated Press contributed. Editor's note: Pool video has since been removed from this story due to usage restrictions from the royal family.