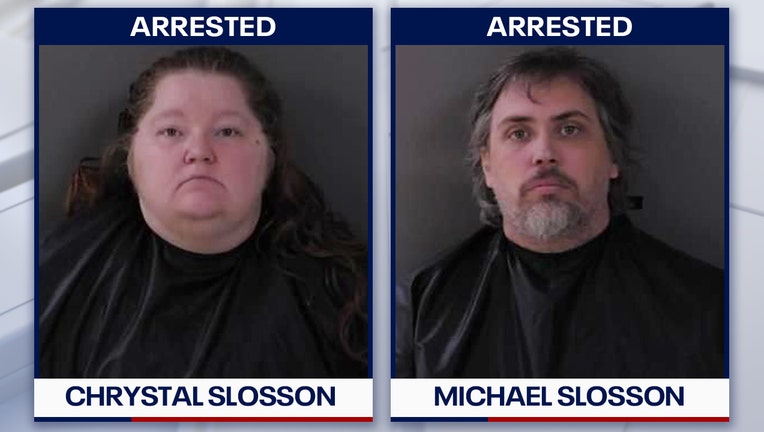 VERO BEACH, Fla. - Two children are in the custody of the Department of Families and Children after a naked toddler found wandering outside alone led officers to a home littered with trash, urine, fecal matter and mold.

According to the Vero Beach Police Department, a neighbor contacted authorities shortly after 1 p.m. on Wednesday because an unclothed four-year-old girl had wandered into her yard alone.

Officers arriving on the scene were told by other neighbors that they saw the child leaving a nearby home about 45 minutes earlier by herself.

Police say they went to the child's home and found the girl’s parents, Michael and Chrystal Slosson, and a nine-year-old inside. The parents told officers that the girl must have climbed out a window after they put her down for a nap.

While speaking with the Slosson’s, officers say they smelled strong odors of urine and feces coming from inside the home.

Police report seeing trash covering the living areas, kitchen, and bedrooms and feces on the walls through the front entrance and the windows of the residence.

DCF investigators and detectives deemed the residence to be hazardous to anyone living there. The combined investigation revealed both Michael and Chrystal Slosson failed to provide each of their two children with the proper care and supervision to maintain the children's physical and mental health.

The Slosson's were arrested by the Vero Beach Police Department at their residence and are facing two charges of child neglect each.

They were booked into the Indian River County jail and are being held on a $10,000.00 bond each.